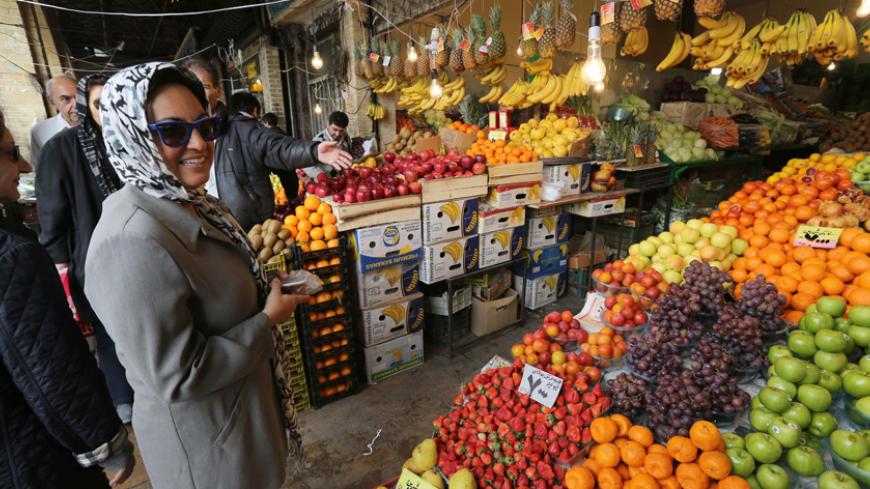 Iranians shop for Nowruz at a market in Tehran, March 19, 2014. - ATTA KENARE/AFP/Getty Images

As usual, the Iranian new year started with a major policy speech by Ayatollah Ali Khamenei, who yet again dedicated an important part of the oration to outlining economic strategies and necessities. The supreme leader said the Iranian economy was in need of a serious and grand move that has to rely on indigenous capacities. Khamenei described the economic field as a battlefield and rejected the notion of economic growth and progress based on exogenous resources. He cited external sanctions and the developments on the international oil market as proof that one cannot depend on external means. Khamenei reiterated his concept of economy of resistance, which can be described as Iran’s remedy to confront external sanctions.

The core element of the economy of resistance is domestic capacity building and an end to the export of raw materials. The strategy makes a lot of sense as Iran wishes to generate as much added value on Iranian soil as possible, which would make the Iranian economy more immune against external irritants and also prepare the ground for further economic and technological growth, create the jobs that are needed due to the youthful population and empower Iran on the international stage. These are also the goals that Tehran has pursued in its so-called 20-year vision. Khamenei reminded everyone that the country had arrived halfway through the 20-year plan, which was passed in 2005. The country is nowhere near the goals that it set for itself in the mentioned document. At the same time, analysts agree that the country enjoys the key elements that would provide for exceptional future economic growth. These phenomena include a unique set of natural resources, an educated human resource base, the country’s geostrategic position — including access to huge regional markets — and a rich merchant culture. While the combination of these resources has made the Iranian economy resilient against external pressures, the existence of a number of bottlenecks has hindered progress.

Judging from Khamenei’s speech, there are two schools of thought in the country: One, those who believe that Iran’s economic potential can be achieved through greater integration with the global economy; the other, those who believe that Iran has to rely on its domestic capacities. However, a closer look at the key impediments to economic progress indicates that both paths would lead to the same set of policies.

Presently, sanctions may seem to be the main source of irritation. Nonetheless, the Iranian economy has faced multiple sources of vulnerability, including corruption, mismanagement and inadequate laws leading to a dysfunctional investment climate. Despite all its laws and regulations, the regime has failed to create a business climate that induces progressive private sector investment. The other source of vulnerability is the government’s dependence on oil export revenues. Though Iran’s reliance on oil export revenues has decreased as a direct result of external sanctions, the government has not yet achieved a balanced budget without oil revenues. In the 1394 budget law that will govern the state budget for the next 12 months, 32% of government revenues will be generated through oil and gas export revenues, down from 40% in the previous Iranian year. Incidentally, both government and parliament have shown a resolve to move toward a scenario to reduce the treasury’s dependence on oil and gas export revenues to zero. This may take a few years, but it will certainly be a key component of the resistance economy strategy.

In trying to reduce the government’s reliance on oil and gas export revenues, the authorities will have to move toward higher tax revenues for the government. However, thr fact is that the government is facing major tax evasion. According to the head of the Iranian National Tax Administration, Ali Askari, Iran is losing up to $20 billion a year due to tax evasion. A significant segment of this tax evasion is related to the existing administrative corruption in the country. This fact points to the other important source of vulnerability — corruption. Interestingly, the original decree that Khamenei produced to introduce the concept of economy of resistance called for “Increased transparency in financial matters and avoidance of activities that pave the way for corruption.” But the process of fighting corruption seems to focus on exposure of past fraud cases as opposed to preventing future corruption. As I argued earlier, the government’s new resolve to fight corruption won’t bear much fruit if it does not tackle the legal, political and structural sources of corruption. Incidentally, the most significant reforms would have to empower civil society, promote the rule of law and pave the way for more transparency and accountability.

Analyzed through this prism, political and legal reforms will be a prerequisite of achieving the country’s economic goals, including domestic capacity building. The question remains whether the regime as a whole is prepared to introduce such reforms. The experience of the Khatami presidency (1997-2005) indicated that powerful interest groups would push back against structural and political reforms.

This may explain why in his Nowruz message Khamenei asked for greater cooperation between the “administration and the people.” He stated: “Our great wishes for the people in this year are economic progress, regional and international power and dignity, scientific leaps in the real sense of the word, judicial and economic justice, and faith and spirituality — which are more important than other wishes and which prepare the ground for all of them to be attained. ... One of the most important conditions [to achieve these goals] are close cooperation between the people and the administration.”

However, analysts agree that the impediments to political and legal reform in Iran are not the “people,” but opaque and not so opaque interest groups. At the same time, the Rouhani administration may be the best political constellation to manage these interest groups, which will continue to lobby for their interests. It is also important to appreciate that not all of these interests are illegitimate. For example, as the country is preparing to increase its trade and investment relations with Western countries, one important stakeholder in the process is domestic industry. In fact, in the absence of international companies, Iranian enterprises (governmental, semi-state and private sector) have created capacities that wish to continue to flourish in the future. This means that the government would have to pace the re-entry of international companies into the market to reduce the negative impact on domestic industry.

At the same time, the same domestic industry is increasingly moving toward export orientation, which will again require the lifting of sanctions. Consequently, no matter whether one bases the country’s future strategy on domestic capacity building or on greater global integration (which are not mutually exclusive), one needs to leave sanctions behind and also introduce needed legal, political and structural reforms.