Gazans are resorting to female mediators who achieved significant progress in the social reform field; however, these mediators still lack official and government support. 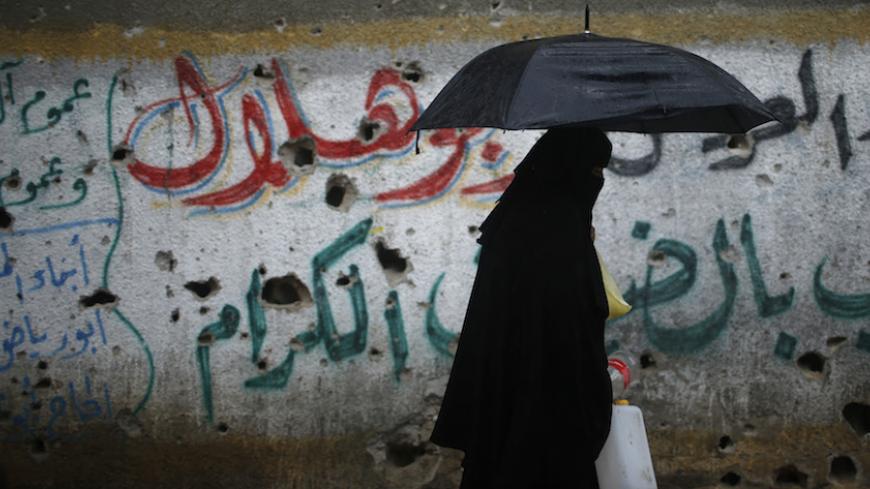 A Palestinian woman holds an umbrella to cover herself from rain as she makes her way to fill containers with water in Shajaiya neighborhood, in the east of Gaza City, Oct. 19, 2014. - REUTERS/Mohammed Salem

DEIR AL-BALAH, Gaza Strip — Women in Palestinian society are ashamed to discuss their problems with the male elders in charge of mediation committees. However, today, things have become easier for women, as the first female mediators have pushed forward social reform and now defend women's rights in tribal councils headed by men. Gazans go to these councils to settle their family problems and avoid going to court, where the resolution process is much longer and complicated.

Over the past couple of years, female mediators have increasingly emerged in the Gaza Strip. Some inherited the profession from their fathers and grandfathers, while others possessed innate wisdom and statesmanship. After training, they joined Gaza's mediation committees, where citizens often take their issues instead of to the judiciary or police. Female mediators are often asked to intervene to solve problems within a family, such as settling a dispute between a husband and his wife.

Maitre Abdul Moneim al-Tahrawi, president of a project to train Gaza's mediators at the Palestinian Center for Democracy and Conflict Resolution, told Al-Monitor, “The center held legal training sessions. The mediators intervene in a friendly manner on many issues regarding women — such as matters related to residency, inheritance and economic or physical violence practiced against women in Gaza — and try to settle it before referring [these issues] to the law.”

Tahrawi said, “We have formed a social committee for the mediators at the center, to which women can resort to for various problems. The mediators resort to the center’s [female] lawyers to present the women’s issues before the courts, for a minimal cost and sometimes free of charge, since most women are unable to raise such issues on their own.”

Faten Harb, 41, is one of Gaza's most prominent mediators dealing with women's issues. She told Al-Monitor about her experience. “I participated, along with a number of women, in extensive sessions with women’s rights associations to develop our knowledge in the legal and social reform fields. We then joined the social reform mission,” she said.

“The need for active social reformers has become crucial in the Palestinian society in Gaza, due to the increasing female problems, especially after the recent Israeli war. The number of widows after the war, the divorce rate and marital problems have increased as a result of the difficult economic conditions, and the disputes over the custody of children,” Harb said.

“Battered and marginalized women now have the power to reveal all the details of their problems to female mediators. Thus their rights have now been delivered, contrary to what was previously done when men had the power to appeal to other men in the reform committees and convince them of their point of view,” she said.

In Palestinian society, it is often preferred for women not to speak for themselves about their problems before the police or male mediators. In these situations, a man is usually appointed to speak on their behalf. Rima, 41, who refused to disclose her full name, approached the female mediators in her quest to find a solution for her daughter, whose husband refuses to give her money or grant her a divorce.

She told Al-Monitor, “I went to see one of the elders of a committee of the Islamic Jihad movement to solve my problem, and although he believed me, he told me, ‘Go home and send your son or husband or brother to speak in front of the rest of the committee about your problem, because, after all, you are a woman.’”

He told her that “no one will be able to explain my problem as well as I did to the rest of the committee, but he said that a man must be present. My husband is sick and my son is very young and he is not aware of the entire details. This is why I resorted to the female mediators.”

Harb said, “One of the most difficult legal issues faced by women in the Gaza Strip is the issue of inheritance. This is why the Palestinian women's rights associations work on training the female mediators: to be able to handle issues of inheritance from a legal perspective.” She noted that the patriarchal society refuses to give women a share of the inheritance, although Islamic law ensures women’s right to it. Sometimes a female’s male siblings have the entire right to inheritance, while their female siblings remain poor and deprived of it. Here lies our job in fixing this problem.”

The female mediators form a link between women who have filed complaints and the police department. Gaza City's mediator, Umm Majed Hassouna, 51, told Al-Monitor, “The general-director of the police entrusted [me] to resolve issues that are submitted to the police, which are based on conjugal or family disputes,” noting that “some of the issues that are presented to the mediators can be controversial and legally complex, so we refer them to the [female] lawyers at the center in order to find a proper solution.”

According to the female mediators, they often face difficulties in the workplace, since certain male mediators cannot accept the presence of female competitors or colleagues. Harb said that she faced many difficulties in the beginning due to her physical appearance. “I never felt that my beauty could ever be an obstacle. But society’s perception stems from male power, which sees women as weak creatures who do not know their rights. Society does not want women to be strong and rejects powerful women,” she said.

According to the Ministry of Local Government, 777 men are employed as mediators in the Gaza Strip, specializing in reform or government assistance. However, the Palestinian Center for Democracy and Conflict Resolution has only trained 80 female mediators since 2010.

Harb believes that the values of Arab societies contradict the principles of Islamic law. “Islam is a flexible religion and the holy prophet allowed his wives to do commercial work, like Khadijah. He also asked for their opinions in several affairs like he did with his wife Umm Salma. However, our society is far from being similar to religion; it perceives women as inferiors, and rejects our presence in leadership positions.”

Despite this significant leap for women in the field of social reform in Gaza, women still lack government and legislative support to establish their own facilities where women could go in cases of violence.