Suicide rates on rise in Gaza

Suicide cases are increasing in the Gaza Strip as a result of the wars waged by Israel that cause psychological, economic and social problems. 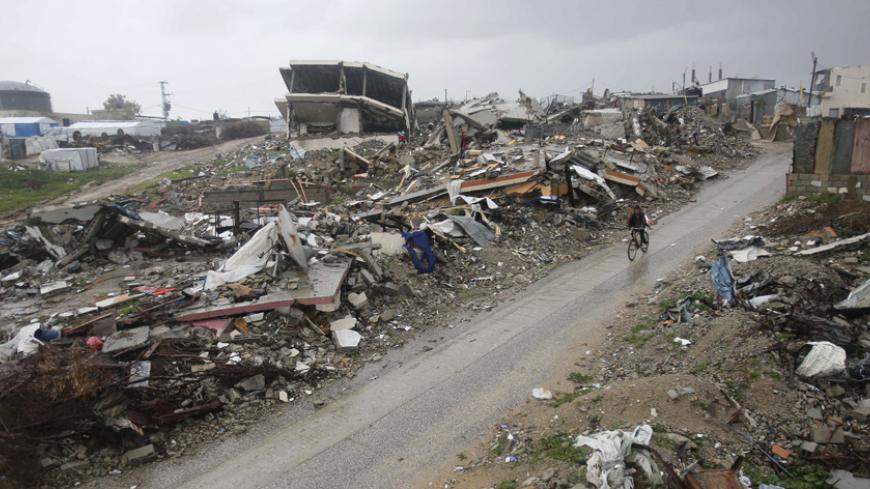 A Palestinian boy rides a bicycle past the ruins of houses that witnesses said were destroyed by Israeli shelling during a 50-day war last summer, on a rainy day in the village of Johar a-Deek near the central Gaza Strip, Jan. 9, 2015. - REUTERS/Ibraheem Abu Mustafa

RAFAH, Gaza Strip — Tunisia only needed Tarek al-Tayeb Mohamed Bouazizi in December 2010 to start the Arab Spring and subsequently the country ruled by a dictator became a lawful democratic state. The goals of Tunisians were accomplished after the suicide of Bouazizi, who set himself on fire in a protest against the oppressive security policies.

Committing suicide by hanging, poisoning or setting oneself on fire is now more common for those who have completely lost hope. For them, it is the easiest way to find eternal rest and to escape from the political, economic and social injustice they are subject to. The Gaza Strip, besieged for the past eight years and suffering the misfortunes of isolation, is witnessing the new phenomenon of suicide that is plaguing its streets, just like Tunisia and Egypt.

A resident of Rafah in the southern Gaza Strip, who worked in a public health company for the Ministry of Health, was fired by his boss when he found out his employee had hepatitis A. “I used to get paid around $200 a month and supported my large family on this. Suddenly, I found myself on the streets, begging for money to put food on the table,” he told Al-Monitor on condition of anonymity. He suffered psychological and economic problems for three weeks after he lost his job. He then consumed rat poison in an attempt to end his life, but miraculously he survived.

Samir Zakout, the coordinator of the Field Research Unit at Al Mezan Center for Human Rights in Gaza, told Al-Monitor that during the past three years, the center was able to detect 16 suicide cases, 14 of which resulted in the person’s death.

Zakout noted that suicide is a new phenomenon in Palestinian society, since in the past only about one case occurred per year. “Today, this number [16 cases] refers to the Gaza Strip alone. I believe this number is high considering the religious and conservative culture of Palestinian society, and the surface and population density of Gaza. We never had suicide cases before; there were only murders for honor or criminal motives, which used to be registered as suicides to protect the criminals who committed them,” he said.

He pointed out that the cases observed by Al Mezan Center during the past three years were indeed all suicides, most of which were attempts to leave the harsh economic and social reality behind.

Zakout stressed that suicide and domestic violence cases result from pressure, poverty and the deterioration of the general situation without any obvious intervention by the Palestinian government. “There is complete ignorance regarding the people’s suffering, in addition to new problems such as the permanent power cuts. There is mismanagement, corruption and tyranny, but no one seems to do anything about all these issues,” he added.

Youssef Awadallah, the director of Rafah’s governmental psychiatric clinic and of a private clinic, said that suicide is the result of cumulative thoughts of nostalgia that the person who attempts to end his or her life experiences after completely losing hope. He noted that the three consecutive wars waged by Israel against the Gaza Strip in less than six years, in addition to psychological problems, unemployment, poverty and depression, significantly contributed to pushing Gazans to resort to suicide in an attempt to end their problems.

Awadallah told Al-Monitor that one or two cases of failed suicide attempts come to him for therapy each month. “The number of men who come to our clinics is three times higher than the number of women. The majority of suicide cases range from hanging or shooting oneself to jumping from high buildings. As for women, they usually resort to overdosing on medication,” he said.

“According to my estimations, for every 100 people 80% to 90% suffer from psychological disorders. The reasons behind these disorders are usually genetic factors as well as economic and social issues,” he added.

Awadallah expects the number of suicide cases to increase in the near future due to the deteriorating situation in Gaza. “There is no glimpse of hope for the Israeli siege to end or for the situation to improve. In the past, we used to say that Hamas’ employees in Gaza were not receiving their salaries; now the Palestinian Authority’s employees no longer receive their salaries. The situation is going downhill and the suicide attempts are bound to increase,” he said.

As long as Gazans continue to suffer from the Israeli siege and the economic, social and psychological problems it results in — and in light of official negligence — their means of expressing their suffering are limited. These means, however, do include suicide attempts.