According to sources, Wilayat Sinai carried out an organized attack against the largest headquarters of the Egyptian army in the peninsula. 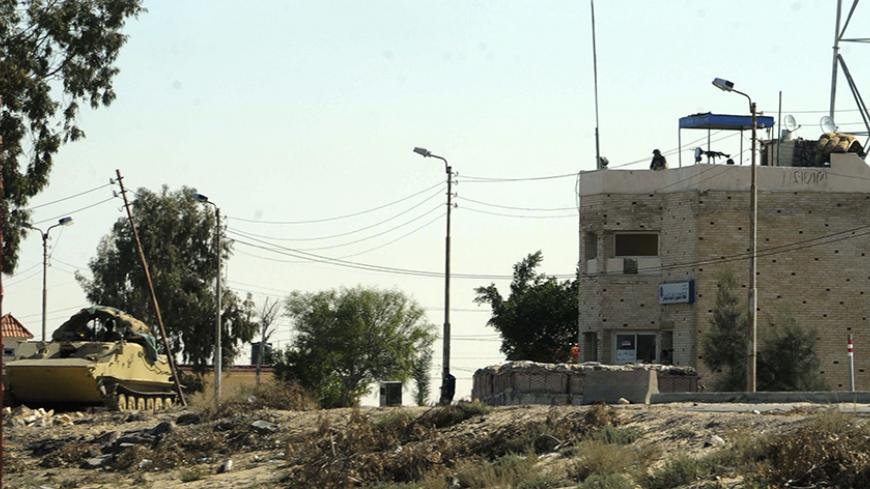 A correspondent in Sinai
February 3, 2015

EL-ARISH, Egypt — The terrorist attacks that took place in the Sinai Peninsula on Jan. 29 have revealed the size of the difficulties faced by the army in confronting the terrorist “Wilayat Sinai” organization. Despite this, the Egyptian government continues to praise the great achievements made in eradicating this organization.

These organized and qualitative attacks targeted 10 military headquarters and bases in three different cities at the same time, including the largest headquarters of the army in Sinai, known as Battalion 101, in el-Arish. The attacks left more than 35 military personnel dead and 70 others wounded. This led to a trust crisis and raised the ire of the Egyptian people; meanwhile, military commanders made speeches confirming their control of Sinai and progress toward the eradication of terrorism.

The Egyptian government met the public outrage with a series of accusations against foreign military forces that were supposed to have entered Sinai to carry out these organized and professional strikes to harm Egypt. The government demanded the support of the Egyptian people in their war against those lurking around Egypt.

During the Misr Fi Yawm TV show, broadcast on Egyptian satellite channel Dream, Maj. Gen. Ahmed Rajai Attia, founder of the Task Force 777 of the Egyptian army, said, “Those who carried out the recent fierce operations are military forces [affiliated with] Hamas and coming from Afghanistan, Pakistan, Libya, Iraq and Syria, under the leadership and planning of the West and the CIA.” Attia ruled out that terrorists were behind the operations.

A researcher in the affairs of Sinai and the armed groups told Al-Monitor on condition of anonymity, “These statements are a cover on the part of the authorities against the negligence and failure of the military campaigns, which broadcast false news and illusions about the progress in the war on terrorism in Sinai amid continued injustice plaguing civilians.”

Asked about the recent terrorist attacks, the researcher replied, “For jihadist organizations, these are called attacks or invasions, and they are planned a few months in advance to set plans and get trained for their implementation. Their planning follows several stages; the first stage is choosing the target location. The second phase is collecting information, observing and taking photos. The third phase is monitoring the points of weaknesses and developing the implementation tactics in terms of the quality of the weapons used and the logistics required for the implementation of the attacks.”

One of the most shocking revelations for the army forces was the attack on Battalion 101 in el-Arish, the largest military headquarters of the army in Sinai, which is an extremely secure and fortified place. However, the researcher did not see this as a surprise. “The jihadist organizations follow a rule whereby the most unlikely target is the easiest,” he said.

“As for the simultaneous attack on 10 headquarters and bases, the aim was to disperse machine guns and mortars and divert attention from the main operation, which is the attack on the battalion deemed as the mastermind of the military operations in Sinai,” the researcher added.

Asked how the terrorist organization, the former Ansar Bayt al-Maqdis — Wilyat Sinai — penetrated the headquarters of Battalion 101, a dissident from a jihadist Salafist group told Al-Monitor on condition of anonymity, “The place is full of guards and cannot be targeted through direct clashes, hence the suicide car bombs. When the target is heavily fortified similarly to the Battalion 101 headquarters, multiple suicide cars are sent in [from] different directions.”

“The plans and targets vary depending on the field information detected during the planning stage,” the source said. “For example, Battalion 101 is heavily guarded with formidable barriers and sandbags on the surrounding roads, and the plan was to send three car bombs. The first and second were to go in different paths in front of the battalion headquarters to confuse the forces and kill the security elements to facilitate the entering of the larger goal, namely a tank car loaded with 10 tons of explosives. This car managed to penetrate one of the battalion gates. … It is difficult to respond to 10 tons of heavily explosive materials. It is impossible to confront an erupting volcano!”

But the most important question raised in this context is how the first two vehicles reached the forefront of the battalion headquarters. People circulate rumors that the military block is so fortified that even birds cannot fly near it. If a citizen mistakenly reaches that area, he is to undergo heavy fire from security guards.

The jihadist replied, “Such operations are smartly studied based on the information collected during the monitoring process. The type of the bombing car and the timing of the attack are both chosen according to the monitored algorithms.”

“The first two vehicles were microbuses. Analyzing this fact may suggest that these vehicles could have been a microbus belonging to the North Sinai Security Directorate near the battalion, or a microbus belonging to the intelligence apparatus. Also, the vehicles were expected to have had digital plates similar to those used by the security forces. The drivers of the vehicles were expected to have been trained to break through the barriers at high speed and explode at the nearest sand barricade adjacent to the area, and this is what happened,” the dissident added.

As for the timing of the attacks, he said, “There are several indications for the selection of the first few minutes of the curfew, known to start at 7 p.m. which is when security forces are relaxed. The second indication is the start of the nightfall and the easiness of movement. The third indication is targeting the emotions of the people through videos that say that they have chosen a timing during which there is no civilian movement. This would prove that they respect the sanctity of blood, contrary to the Egyptian army, which targets a lot of unarmed civilians. However, the use of 10 tons of explosives in the vicinity of a residential area infers a catastrophe for hundreds located kilometers away from the targeted area.”

The jihadist said several reasons led Wilayat Sinai to choose to target the largest army battalion in Sinai: “The first reason is exemplified by the viral media reports about the results of the large operation in Egypt, a country with significant international standing. The second reason is earning the trust of the Islamic State emir, who provided them with more rewards, money and weapons. The third reason is working in the coming days on issuing a propaganda video to claim responsibility for the attack on Battalion 101 and that this attack was to help innocent civilians get revenge for their harassment in the battalion headquarters — known among the residents as 'Sinai Guantanamo' — and subsequently attract those disgruntled at the repressive security practices.”

Sinai will remain an arena of open conflict until the state’s anti-terrorism approach changes. People say terrorism cannot be defeated unless the security measures adopted to protect unarmed civilians are comprehensively developed.