Counterfeit medications have become a common problem in Egypt, which has no central drug commission or strong laws penalizing their production and sale. 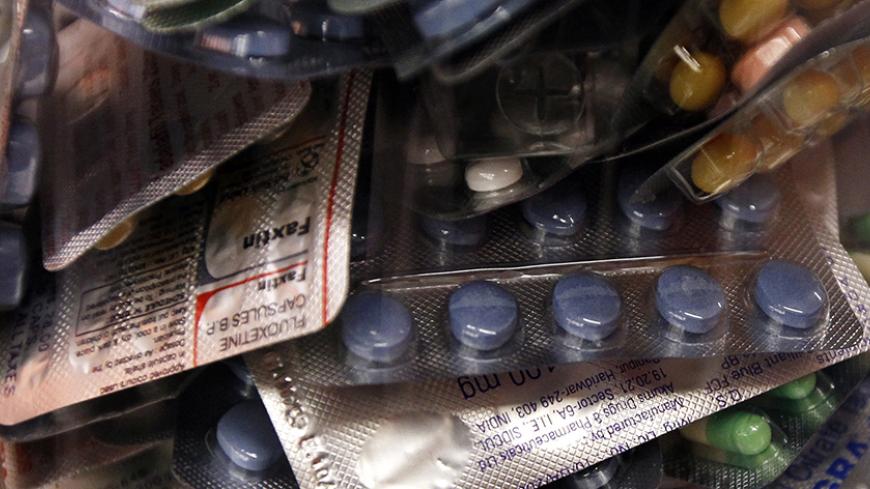 CAIRO — The number of counterfeit medications in Egyptian markets has recently reached 30% of the total of drugs on the market. The prevalence of counterfeit drugs has even extended to several vital medications used to treat cancer, liver inflammation, allergies, diabetes and tumors.

The consumer, torn between the Ministry of Health, the police and the Ministry of Supply, remains the biggest victim, in the absence of an independent Egyptian drug committee that monitors the registration, pricing, sale and quality control of medications. Egypt’s national economy is suffering as well.

Mohamed Seoudi, the undersecretary of the Egyptian Pharmacists Syndicate, told Al-Monitor, “This problem is tightly linked to pharmacies that have multiple branches whose owners hold huge capital and are close to the decision-makers in Egypt. They are the ones mainly selling counterfeit and smuggled drugs.”

He added, “The lack of laws that deter the counterfeiting of medications has led to the spread of this phenomenon, as Law 126 of 1955, dealing with the practice of the pharmacy profession, is not in line with the spread of counterfeiting that surfaced in the past few years. The sanctions range between a fine that is no less than 20,000 Egyptian pounds [$2,600] and no more than 50,000 pounds [$6,600] or a two-year prison sentence. This is not a deterring law.”

Seoudi noted, “We have made several suggestions to the Ministry of Health to make the punishment for counterfeit medications harsher, to reach in some cases execution when the medication causes death.”

Seoudi indicated that because of the lack of direct communication between the Ministry of Health and pharmacists, the phenomenon of counterfeit medications has expanded. Lines of communication such as Internet hotlines are needed to facilitate the reporting of problematic medication to pharmacies, whether they are counterfeit or suspected to be.

Seoudi said, “The project of an Egyptian drug committee presented to the presidency is exactly similar to the American Food and Drug Association.”

He explained, “The Ministry of Health is strictly refusing to pursue the project, as it will deprive it of the huge revenues it receives through the central administration in the ministry. The latter receives money in exchange for registering or pricing any medication on the Egyptian market.”

Seoudi demanded an end to the practice of withdrawing machines used for drug manufacturing from the market and selling them later on, as the Bir al-Selem pharmaceutical factories use them to produce counterfeit medications. These machines, which should not be sold to just anyone, must be smelted and remanufactured. Furthermore, the importation of pharmaceutical-making machinery should be restricted to authorized drug manufacturers.

Amir al-Komi, the head of the quality control for the Egyptian Consumer Protection Association, told Al-Monitor in an interview, “The agency is doing its part to monitor the activities of pharmacies, through inspection campaigns according to the bulletin issued by the Ministry of Health on counterfeit or smuggled drugs.”

He said, “We request that the inspector takes legal action against the concerned pharmacies according to the type of crime or fraud that has been committed. However, we need to employ more efforts to follow up on all the pharmacies’ activities in the provinces and villages in Egypt, which requires larger financial allocations. We also demand that all laboratories analyzing the drug samples be brought under one umbrella to speed up this process.”

Komi added, “The Consumer Protection Agency supports the Egyptian Drug Authority’s draft law. Should the current government refuse to pass it, we will not give up and will refer the law to the upcoming parliamentary session.” He stressed that most countries have established similar associations, including neighboring states Saudi Arabia and Jordan.

The former undersecretary of the Ministry of Health for the pharmacy department, Mustafa Ibrahim, told Al-Monitor, “The [ministry's] central administration charges fees for registering or pricing drugs, after analyzing their samples and before putting them on the market. The Ministry of Health plays its legal role to monitor drugs in Egypt.” He added, “Illegal drug trade ranks second at the international level after arms trade, which encourages many unscrupulous people to tamper with drugs, either by decreasing their active ingredients or completely faking them.”

Georges Ishaac, a leader of the Civil Democratic Current and member of Egypt’s National Council for Human Rights (NCHR), told Al-Monitor that the council called for laws to end the misleading advertisements that threaten Egyptians' health and fundamental rights, most importantly the “right to a secure treatment.”

The NCHR called for a review of the laws addressing health and commercial fraud, an amendment of the consumer protection law to increase its efficiency in protecting Egyptian citizens, increasing the role of its affiliated media watchdog and limiting the sale ​of drugs to pharmacies only.

An Egyptian drug committee is needed to certify any medical or food product made in Egypt or imported from abroad. The committee would also run campaigns to raise awareness about health and protect citizens, as well as require television channels to dedicate time to educating people on harmful products and the risks of counterfeit drugs promoted by misleading ads. Drug producers must be made to declare known side effects on drug packaging.

Ultimately, Egyptian citizens remain the only victims of negligence by the authorities, whose decisions are always issued when crises have already become acute.