The recent decision of Egypt to suspend the works of a private company tasked with the project of linking the Congo River to the Nile stirred much controversy, considering the water quota this project would have provided to Egyptians. 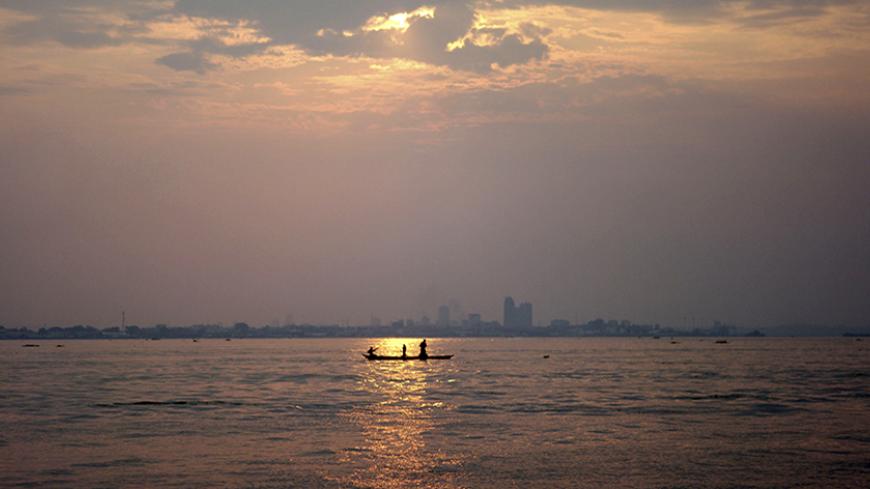 A wooden boat sails at dusk on the Congo River against the backdrop of high rises in the Democratic Republic of Congo's capital Kinshasa, March 7, 2010. - REUTERS/Katrina Manson

CAIRO — After years of controversy surrounding the topic, the Egyptian government made a final decision on Jan. 19 concerning the proposed project to link the Nile and Congo rivers, aimed at providing the country with additional water shares. The government decided to halt any studies on this topic with a private sector company in charge of implementing the project, and officially announced that the project would not be included in its water plan.

This stirred the Egyptian public opinion, especially after farming union leaders announced their support for the project. They had hoped it would alleviate their suffering from the recurrent water crises, which affect drinking water as well. Egypt’s water quota has remained at 55.5 billion cubic meters a year, and there is a crisis threatening a decrease in this amount, as the Nile headwater states are insistent on a redistribution of the river’s water quotas. This is in addition to the threats posed by the new Ethiopian dams, especially the Renaissance Dam, which is expected to deprive Egypt of a large part of its water share when the first stage is completed in 2015.

The Egyptian government’s decision to cancel the project was based on a report prepared by the Ministry of Water and Irrigation and submitted to President Abdel Fattah al-Sisi in January. The report noted 22 obstacles that would make the implementation of the project very difficult, if not impossible. The report included the obstacles that Al-Monitor discussed in an article in October 2013 titled “Egypt’s 'lost dream' of linking Congo, Nile Rivers.”

According to the government report (of which Al-Monitor obtained a copy) to halt the project, the proposal submitted by the team from the Africa Development Project and link the Congo River (which represents Sarco, a private company in charge of implementing the project) is based on transporting 110 billion cubic meters of water annually from the Congo River Basin to the Nile Basin, by linking the two rivers. This would represent about twice the amount of Egypt’s current Nile water quota. However, the project is not internationally recognized as being feasible and the work presented by the company is still at the proposal stage; the stage of exploratory study has not been reached. Moreover, the proposal lacked essential technical details, and the project would require elevating water from the Congo River 800 meters (2,625 feet) to reach the Nile River Basin. This would be very difficult given the nature of the terrain separating the Nile and Congo basins.

The government report warned that, in addition to the technical obstacles that make linking the two rivers a fantasy, there are other obstacles represented by the exorbitant cost of the project wha cancel out its economic feasibility. Moreover, the work team ignored the legal dimensions of the proposal, since the Congo River spans several countries and the principle of requesting to transfer water outside of its natural basin is in violation of international norms.

In an exclusive interview with Al-Monitor, Alaa Yassin, the adviser to the minister of irrigation for dams and the Nile Basin, said, “The implementation of this project is not possible, and [would] have serious consequences for Egypt.” He added, “[Egypt] may ask other Nile countries to transfer water to us, similar to the proposal presented to transfer the Congo River’s water.”

Meanwhile, the debate regarding the economic feasibility of the project has intensified between water experts, with some supporting it and others opposing it.

The company, which was going to implement the project, has launched a campaign against officials from the Ministry of Water and Irrigation, accusing them of obstructing the project and not adequately reviewing initial studies.

Ibrahim Fayoumi, the engineer in charge of the Africa Development Project and link the Congo River, challenged officials in the Ministry of Water and Irrigation. He told Al-Monitor that he and his team concerned with carrying out studies will not be defeated by this governmental rejection and will not stop moving forward toward implementation. “We will meet with officials from the Ministry of Water and Irrigation again, after we succeed in delivering water to the Egyptian border at Aswan, from Congo through South Sudan,” he said.

Fayoumi said he has received blessing from both Congolese President Joseph Kabila and South Sudan President Salva Kiir Mayardit to implement the project, yet he did not deny that this governmental rejection in Egypt might cause panic among African countries involved in the project.

In response to these accusations that the Ministry of Water and Irrigation was obstructing the project, Wael Khairy, chairman of the Central Administration for Bilateral Cooperation with the Nile Basin in the ministry, said that these allegations are false. He told Al-Monitor that government experts who reviewed the studies presented by the working team from the company chosen to implement the project agreed that implementation was not possible, especially since the project was slated to pass through regions with civil conflict and tribal areas.

“There have been problems facing the completion of the Jonglei Canal project, which has been halted for four decades and involves moving only 4 billion cubic meters of water a distance of 360 kilometers [224 miles] from South Sudan to Egypt in its first phase. We must first consider this before we think of a proposal to transfer 110 billion cubic meters a distance of more than 3,000 kilometers [1,864 miles],” Khairy said.

“The Congolese Water Resources Act prohibits the transfer of water from the Congo River outside the nation’s borders, and for this reason multiple proposals from foreign entities to transfer Congo River water outside Congo have failed,” he added.

Adel Abu Bakr, the legal adviser for the project’s work team, denied that the Ministry of Water and Irrigation had unduly assumed the role of the Egyptian Foreign Ministry in its report on the project, in its discussion of legal motives resulting from linking the two rivers. He stressed that the Ministry of Water and Irrigation was only reviewing technical issues, leaving the legal and political issues to the political leadership.

The technical difficulties facing the implementation of this project are still a subject of controversy in Cairo. Fears of violating the principle of international law that prevents the transfer of water from any river shared by more than one country to another river was the main obstacle that drove the Egyptian government to formally refrain from supplying Egyptians with water from the Congo River. Egypt did not want its participation in the project to serve as a pretext for any of the Nile headwater countries to sell their water, especially in light of the repeated Israeli requests to extend the Nile’s water to Tel Aviv.