For more than a century, there's been talk of linking the Congo and Nile rivers to provide Egypt with water, yet successive Egyptian governments have strongly opposed such an undertaking. 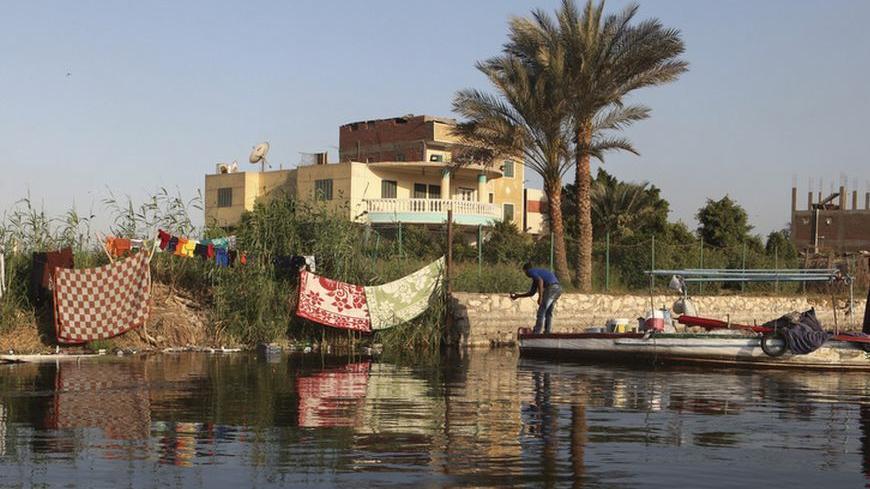 Fishermen hang their clothes out to dry on the banks of the Nile in Cairo, April 16, 2013. - REUTERS/Asmaa Waguih

Linking the Nile to the Congo river has always been the lost dream of Egyptians to achieve water security and provide necessary water allocations for the development of projects, be they agricultural or industrial.

The idea was first seriously explored in 1980 during the administration of the late Egyptian President Anwar al-Sadat. Sadat sent an expedition to the Congo to prepare a conceptualization of the project. However, the idea had first emerged in 1902, and was mentioned in a book written by Apata Basha, Egypt’s former chief irrigation engineer in Sudan.

However, this idea died with the death of Apata, as did the conceptualization of the project with the 1981 demise of Sadat and the arrival of President Hosni Mubarak to power in Egypt. Moreover, successive governments have always found excuses to shun the implementation of the project.

This dream kept recurring from time to time in the minds of Egyptians. Yet, crises have intensified between Egypt and Ethiopia and the countries with the rest of equatorial headwaters of the Nile, either because of the redistribution of water allocations, or because of Ethiopia's set of dams to control the Blue Nile, which provides Egypt with 85% of its water.

This is not to mention the heightened disputes between Cairo and Addis Ababa in particular. Every time these crises escalate, the dream of linking the Congo and Nile rivers returns to the mind of Egyptians, while Egyptian researchers and specialists come up with new research on the matter every now and then.

Some of these new studies emphasize the possibility of supplying abundant water to Egypt by linking the flow of the Congo to the Nile via canal, akin to the Suez Canal linking the Red Sea with the Mediterranean.

According to a new study conducted by Gamal el-Kalyouby, a professor of petroleum and energy at the American University of Cairo, linking the Nile with the Congo River would divert Congo River water that washes into the Atlantic Ocean into the Nile River Basin. It should be noted that the Congo River water that enters the Atlantic amounts to 1,000 billion cubic meters annually. This diversion could be done by establishing a 600-kilometer [373-mile] canal to transfer water to the Nile Basin from southern Sudan to northern Sudan and then to Lake Nasser, behind the Aswan High Dam in Egypt.

The Egyptian government does not pay any attention to the idea, even though it is worthy of consideration, Kaylouby told Al-Monitor. He added that the study also suggests diverting Nile water toward the west and also east toward the Sinai. This would serve to create a Sahara delta to the west and a delta at the entrance to the Sinai, which would provide 15 billion cubic meters of water annually.

Is this idea impossible to implement, as claimed by successive Egyptian governments, whether during the era of Mubarak or after the Jan. 25 revolution? Egyptian Minister of Water Resources and Irrigation Mohammed Abdel Matlab answered this question. He told Al-Monitor that linking the Congo River to the Nile is difficult to implement because it requires a canal that goes through southern Sudan, which is riddled with ponds and swamps. Thus, the project would threaten to inundate its territories. What's more, there are some legal problems relating to the prohibition of transferring river waters outside their basins, which is an international principle that Egypt cannot risk violating, not to mention the very high cost of such a project.

"Linking the Congo river to the main branch of the Nile — i.e., the White Nile in Sudan — [is a difficult undertaking] given the fact that the two rivers have two different levels, which requires the construction of a huge dam and a number of canals as well," he added.

For his part, former Minister of Irrigation Mohammed Nasreddin Allam, who was the last minister of water in the Mubarak era, opposed the idea, as did the ministers of water and irrigation who came after him.

In a statement to Al-Monitor, Allam defended his government's point of view: "If we assume that we have overcome all the technical and financial obstacles in the implementation of the project, we would still be left with the legal predicament. We would be violating an international rule, which prohibits the transfer of the rivers' water out of their watershed. The Congo River has many tributaries in many African countries, such as Cameroon, Guinea, and the Central African Republic."

However, despite Egypt's official stance on the implementation of the project in light of the aforementioned considerations, the Egyptian Mineral Resources Authority — an Egyptian governmental institution — had a different say on the matter. The authority announced a comprehensive study that was conducted after reviewing the geological maps of the Nile. The study revealed that there is some sort of convergence between the Nile and the Congo River, and that the project would have great impact on putting the wheel of development in motion between Egypt and the Congo.

The study undertaken by the Egyptian Mineral Resources Authority to link the Nile with the Congo River included three different proposed scenarios that would determine the path of the water. The length of the first proposed canal would be 424 kilometers [263 miles] with a water-level altitude differential of 1,500 meters [9/10 of a mile], which would be impossible to implement.

The second scenario’s canal length would be 940 kilometers [584 miles], with an altitude differential of 400 meters [1/4 mile]. Meanwhile, the third would carry the water a distance of 600 kilometers [373 miles] with an altitude differential of 200 meters [218 yards]. The last scenario has the best chances of being implemented, through the use of four consecutive water-pumping stations. As a bonus, the project would also have the ability to generate 300 trillion watts of electricity per hour, enough to satisfy all of Africa’s lighting needs. It’s worth noting that the Congo is classified as being able to generate one-sixth of the world’s hydroelectric power, through the use of its waterfalls.

Based on this study, implementing the project would also entail the building of a road network and railway that can connect Alexandria with Cape Town. The time frame for finishing the project, if the third option were adopted, is 24 months, at a price of 8 billion Egyptian pounds [$1.16 billion]. This amount would cover the cost of building the four pumping stations necessary to transport water from the Congo River basin to the Nile River basin, as well as infrastructure works needed to move the water.

While the Mineral Resources Authority’s study assuaged governmental technical concerns about the difficulties associated with implementing the project, other problems still would have to be overcome. In particular, these include legal problems that revolve around international agreements prohibiting the transport of water from one watershed to another, in addition to the important hurdle of securing the enormous amounts of money needed to execute the project.

Egyptian businessman Ibrahim al-Fayoumi, considered one of the most prominent Egyptian investors in the Congo and whose company is currently executing a number of infrastructure and mining projects there, spoke to Al-Monitor concerning the government’s justifications for rejecting projects that link the Nile River with the Congo. “These justifications are nonsensical, for there is no legal impediment standing in the way of linking both rivers together,” said Fayoumi.

“We have reviewed close to 300 river-related agreements, and none of them contained legal deterrents to the project. Taking advantage of the Congo River’s water would not violate international law since the water would be moved between two watersheds that lie within the borders of the same country, and would serve to exploit water that otherwise would be wastefully pushed 300 kilometers offshore,” he added.

As for the level of funding needed to implement the project, which is one of the hurdles mentioned by the Egyptian government, Fayoumi added, “An Arab and international financing group offered to partake in financing the project and dig a canal connecting both rivers, with the Congolese welcoming the initiative.”

The matter went beyond differences in opinion between the government and a number of the project’s backers, to reach the filing of a lawsuit against the Egyptian government for its failure to begin executing the plan and not taking into account the studies made concerning connecting the Nile with the Congo.

In light of the government’s hesitation, the controversy in Egypt revolving around the possibility of linking the Nile River basin with that of the Congo River, has become a major source of disappointment for the Egyptian people’s hopes of achieving a dream that has haunted them for the past century: namely, the realization of water security for present and future generations.