The Egyptian government hopes the Egypt Economic Development Conference will succeed in attracting new investments given an expected drop in aid from the Gulf. 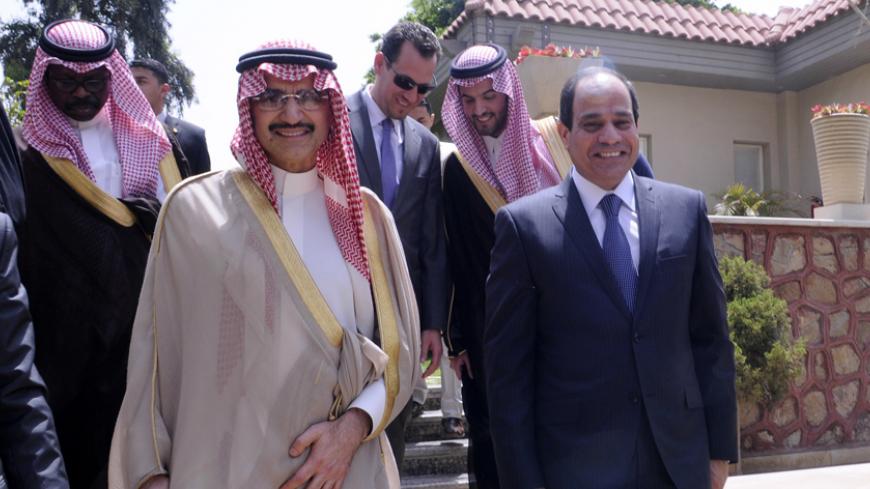 CAIRO — The Egypt the Future: Egypt Economic Development Conference (EEDC), upon which the administration in Cairo is relying to boost the economy in the medium term, is drawing near amid government concerns about a possible unsatisfactory outcome. In a Feb. 5 statement, Prime Minister Ibrahim Mehleb expressed confidence that the conference, scheduled for March 13-15 in Sharm el-Sheikh, will succeed, that it will attract international support and that multinational companies will invest in seven projects that the state will propose at the gathering. Several factors, including fluctuations in Egyptian-Gulf ties — which have been a source of political and economical support for President Abdel Fattah al-Sisi from the ousting of the Muslim Brotherhood regime to his running for president — might threaten the conference's success.

The talk in political circles and the media is that with the death of King Abdullah, Saudi Arabia will change its policies toward the Sisi administration. In particular, it is suspected that for Kuwait, the United Arab Emirates (UAE) and Saudi Arabia, the drop in oil prices and their negative and rapid repercussions on general budgets will lead to reduced financial assistance for Egypt.

Mehleb paid visits to the Gulf, starting with Kuwait on Feb. 2 and later the UAE on Feb. 11. The EEDC conference and future economic and financial support topped the agenda. Signs indicate that the generous support that Egypt has been receiving from the Gulf may not last much longer.

After the overthrow of the Mohammed Morsi government in July 2013, Egypt received $10.6 billion from the Gulf states in fiscal year 2013-14, deposited into non-interest bearing accounts, to support the country’s foreign exchange reserves in addition to oil aid.

A senior economic official in the Egyptian government speaking on condition of anonymity told Al-Monitor, “We have requested additional and direct financial support to be deposited in the state treasury, and we have received reassuring promises.” He would not, however, disclose the nature of the expected support. Meanwhile, Abdul Karim Suleiman, Egypt’s ambassador to Kuwait, said during Mehleb’s visit to Kuwait that he had “no information on any new Kuwaiti aid to Egypt.”

In addition, during Mehleb’s talks, officials in Kuwait and the UAE delivered the message that Egypt will not be receiving additional state financial aid. They did, however, welcome an increase in direct investment and participation in new projects. They also requested a change in the investment climate, with various obstacles removed and bureaucratic procedures amended to benefit investors.

Faisal Al-Shaya, a Kuwaiti parliamentarian and chairman of the Financial and Economic Affairs Committee, told Al-Monitor, “Although Kuwait is witnessing an economic crisis following the decline of oil prices, we must not forget Egypt.” He added, “The revenues almost cover the budget, and there was always a surplus. Oil income at present is 12 billion dinars [$40 billion], and the budget is 19 billion dinars [$64 billion]. There is a deficit of 7 billion dinars [$27 billion], which has dragged Kuwait into a severe crisis.”

In terms of assistance, Shaya explained, “In the National Assembly, we have raised the issue of providing ongoing aid through other means such as investments and deposits, to support the Egyptian economy, but not in the form of grants or loans.”

Omar al-Chunaity, an economic analyst, told Al-Monitor that the drop in Gulf support for Egypt is not unexpected. “The Gulf position was clear from the beginning, through the provision of limited, not endless, support,” he said. “The Gulf countries’ general orientation was not to continue with the provision of direct support, but to provide aid in the form of investments, particularly since oil revenues have declined.”

Chunaity did not expect the EEDC to produce investments that will have a significant impact on Egyptian markets. He said, “Arab investors will attend the conference, and there will be memorandums of cooperation and economic deals. But, the timetable for implementation will not be quick, because of the problems in Egypt’s investment climate.”

Concerns remain that the conference might be a mere platform for trying to talk up the ablility of the Egyptian economy to recover. The conference might not yield the desired results or investment contracts by Arab, Chinese, European or even US companies for the projects the government is proposing in the industrial, telecommunications, power and mining sectors. A ministerial committee formed by Mehleb to deal with conference affairs is still conducting contacts with global trading companies to confirm their participation in the conference.