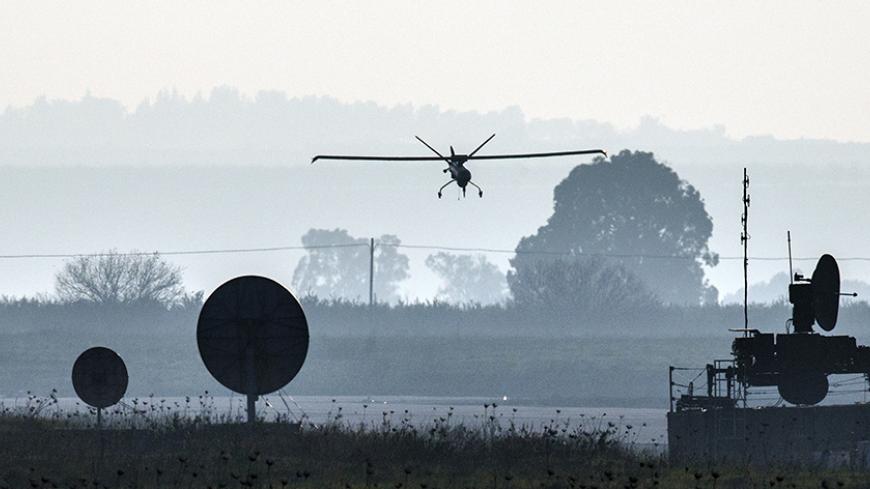 On Jan. 18 news broke that Israel attacked a Hezbollah convoy moving in the Syrian Golan Heights. Although Israeli sources have not officially confirmed the attack, Hezbollah has confirmed it lost six senior officials along with an Iranian general from the Islamic Revolutionary Guard Corps. The attack came at a time when Turkish President Recep Tayyip Erdogan and Israeli Prime Minister Benjamin Netanyahu were engaged in a heated war of words about who should or should not have been present at the Paris solidarity march condemning the Charlie Hebdo terror attacks.

In his address at an Organization of Islamic Countries (OIC) gathering in Istanbul on Jan. 21, Erdogan brought up Israeli attacks on Gaza and how the West turned a blind eye to Israeli atrocities. He again ridiculed Netanyahu for the Paris march. However, there was not a word about the Jan. 18 Israeli attack on Hezbollah forces. Intriguingly, as of Jan. 22, there was no comment or condemnation from the Turkish Ministry of Foreign Affairs on the incident. Pro-Justice and Development Party (AKP) media were silent on the attack as well. A journalist from the government news agency Anadolu, Samet Dogan, tweeted Jan. 18: “In 2006, Hezbollah was at war [with Israel] with the support of the Sunnis. Now, they are alone. God erases one murderer with another.” Other social media users made comments that the fight between Hezbollah and Israel was nothing more than a deception.

Although most pro-AKP media ignored the attack until Hezbollah leadership made the headlines saying, “Hold tight for an attack, prepare your bunkers,” to the Israeli authorities. The Islamist daily Yeni Akit reported this headline with no reference to the names of those killed or the details of the incident. This silence was not lost on some of the social media users, as one mocked AKP supporters in a tweet: “There is commotion on the Lebanese border. Israel is on alert. Let AKP supporters defend the nation against Hezbollah along with Israel on the Golan Heights.” Opposition groups have been implying how Israel and Turkey are in a tacit agreement over Syria.

Middle East expert and journalist for the Hurriyet daily Ali Ornek told Al-Monitor, “I do not think Erdogan’s attitude toward Hezbollah has changed much over the last decade. Remember, Syrian President Bashar al-Assad had criticized Erdogan for remaining indifferent toward the struggle in southern Lebanon in 2006 [the Israel-Hezbollah war]. After the Syrian civil war, of course, Erdogan’s discontent with Hezbollah has increased.”

Asked why Erdogan did not comment on the Israeli attack on Hezbollah, multiple sources close to the government told Al-Monitor it was a complicated situation for Turkey to respond to the attack because it happened on Syrian soil. They were all, however, adamant in criticizing Hezbollah’s actions in Syria. Their criticism was in line with the Anadolu Agency’s Dogan, which tweeted: “Hezbollah cannot give an account of the kids they murdered in Homs, Syria.” Indeed, on Jan. 18 Turkish social media accounts known to be linked with Jabhat al-Nusra claimed responsibility for the attack and declared that those who died were Assad’s fighters. A network allegedly associated with Jabhat al-Nusra, Inca News, ridiculed Hezbollah with the headline, “Welcome to Hezbollah’s Traditional ‘We Will Hit Israel’ Festivities.”

Mahmut Kar, the head of Hizb ut-Tahrir's media relations in Turkey, speaking in a private capacity, examined multiple aspects of the attacks with regard to the regional balance. Kar highlighted a crucial point questioning why Turkey did not officially condemn the attack, with the fact that Hezbollah and Iranian personnel were on Syrian soil. “That the attack took place inside Syria certifies once and for all that the Iranian Revolutionary Guards are actively engaged in the fighting along with the Baath forces. They can no longer hide or deny this fact.”

Different sources reported that Hamas, at a senior level, sent condolences for Hezbollah’s loss and suggested that Hamas and Hezbollah should join forces to fight against Israel. This news also did not make it into the headlines in Turkey, known for its support of Hamas.

In an interview, Alptekin Dursunoglu, senior editor of Yakin Dogu Haber, which focuses on news exclusively from the Near East, cited the intricate balance and potential sore spots of the Turkish approach to the Palestinian issue to explain why Erdogan did not take this opportunity to scold Israel. Dursunoglu told Al-Monitor, “Turkish official policy toward Palestine supports a two-state solution through political dialogue and negotiations with Israel, hence the counterpart is Fatah. That said, the current Turkish government had established strong links with Hamas, a resistance organization that still denies the right of Israel to exist.

“Now, this is a contradictory situation. In a way, Turkey approaches Palestine in the post-Arab Spring context, as an extension of its pro-Muslim Brotherhood policies through its strong alliance with Hamas. This is seen as a part of its policies with Syria and Egypt as well. That is why it is important to see that Turkish Foreign Minister Mevlut Cavusoglu announced, ‘We have convinced Hamas to recognize Israel.’

“For Turkey, Hamas was valuable as a tool to isolate Syria. When Hamas left Syria after the start of the civil war, that was a cause of celebration for senior Turkish policymakers. Yet, in the last couple of months, it is official that Hamas is trying to restore its good relations with Syria and Iran. Yet, Hezbollah was always in the resistance axis. Hezbollah designed its policies on the basis of actual policies, rather than rhetoric. That is why it failed to befriend Turkey, which has increased its trade volume with Israel from $1.5 billion in 2005 to $5 billion in 2014, despite all the political discord.

“Hezbollah could not trust Turkey, whose rhetoric did not match its actions. For example, in 2012 Erdogan had said: 'If we are going to die for Gaza, let’s die as man,' in criticizing Israeli bombing of Gaza, around the same time a cargo ferry between Iskenderun and Haifa had begun. All these contradictory facts generated further suspicion for Hezbollah with Turkey.”

Dursunoglu also explained how in May 2013 then-Deputy Prime Minister Bekir Bozdag, the current justice minister, went on record asking Hezbollah to change its name to Hizbul-Shaitan (from Party of God to Party of the Devil) even though Hezbollah stood with the Palestinian people. Dursunoglu said, “Their [AKP’s] approach to Hezbollah can be explained by what Hezbollah is doing in Syria. As Turkey failed to achieve its goals in Syria and Egypt overall, it clings to the Palestinian cause to overcome its regional isolation. Yet, if Hamas is struggling to rekindle its friendship with Iran, we must question how successful Turkish policies have been toward Palestine.”

Although Erdogan makes international headlines frequently with his angry outbursts, this instance of silence indeed speaks volumes. First, it informs us that despite all his rhetoric, Erdogan is a perspicacious leader who chooses deliberately and carefully when to lash out. Second, despite all denials, sectarianism is gaining hold in Turkey. It has even permeated Turkish perceptions of the Palestinian struggle, which have been a unifying factor for left and right. Last, this silence evinces that AKP’s anti-Assad stand takes priority even over its anti-Israeli rhetoric.