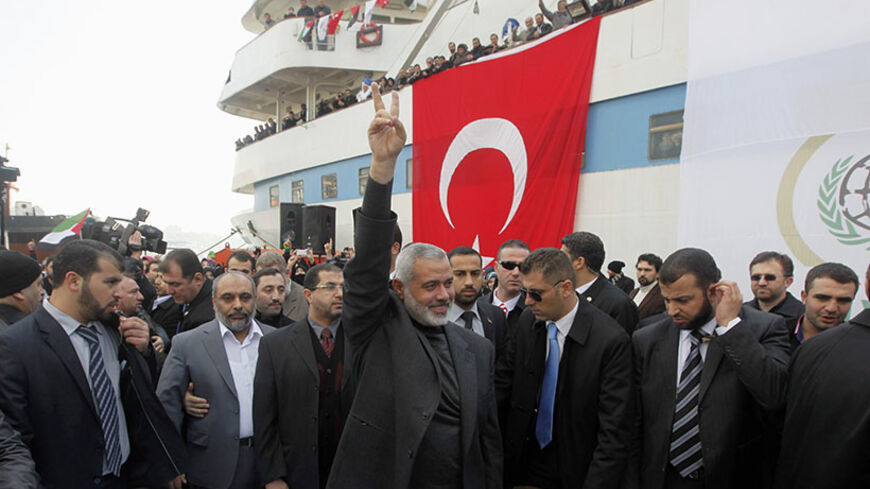 On Aug. 20, at the Association of Muslim Scholars conference in Istanbul, senior Hamas official Salach al-Aruri accepted the long-denied charges that Hamas had kidnapped the three Israeli teenagers on June 12. Their bodies were found at the end of June. From the very beginning, Israel said that the kidnapping and murders were carried out by Hamas.

All along, Hamas has denied its involvement vehemently. Al-Monitor’s Palestine Pulse reported that many Palestinians believe Israelis “orchestrated the kidnapping and murders” to justify an attack on the Gaza Strip. The same conspiracy theory was widely supported in Turkey, too. It is safe to assume that the majority of Turks do not believe the news of Aruri’s acceptance of involvement despite the video recording. Most Turkish pundits are convinced Hamas had no direct involvement, and that the kidnapping and murders of the three teenagers was nothing but an Israeli conspiracy.

However, speaking from Istanbul, Aruri asserted that the Izz ad-Din al-Qassam Brigades' mujahedeen carried out the kidnapping to show solidarity with Palestinians on hunger strike in Israeli prisons. In an interview with Yahoo News on Aug. 22, Hamas leader Khaled Meshaal did not deny Aruri’s contention, and only emphasized that it was carried out without the knowledge of the political wing. Fars News Agency promptly denied the news about Aruri’s revelations as false.

Given all this, why does Turkey, a NATO member country, host Hamas operatives, have high-level meetings with them and support their rhetoric? Hamas is on the list of terrorist organizations of the United States, the European Union, Canada and several other countries, but not on that of the UN Security Council and it is not considered a terrorist organization in Turkey. Therefore, it is safe to say most, if not all, of Turkey’s Western allies considers Hamas a terror organization.

Max Abrahms, professor of political science at Northeastern University, who specializes in terrorism and is a member of the Council on Foreign Relations, told Al-Monitor, “Countries do not gain strategically by hosting terrorist groups. My research demonstrates empirically that terrorism is politically counterproductive behavior that erodes popular support for the political cause and results in a backlash from the target country. Hosting terrorist groups is thus a political liability. There is no strategic sense in supporting terrorist groups because the net strategic effect is almost always negative.”

Domestically, not many even ponder upon such questions with mainstream media boasting how Gazans thanked Prime Minister Recep Tayyip Erdogan for his support. Alptekin Dursunoglu, senior editor of Yakin Dogu Haber, which focuses on news exclusively from the Near East, told Al-Monitor, “I would say even if it may look like Turkey’s heart is with Hamas, its sword is with Abbas. Right now since almost all Palestinian factions appear to act together, I do not see this constituting a risk for Turkey in regard to its relations with the United States.” Dursunoglu explained how difficult it is to convince the Turkish public that Hamas might be planning a plot against the PA; indeed, most in Turkey would not be convinced that Hamas was behind the kidnappings even after a strongly alleged confession from its own senior leader. One of the strongest justifications as to why Turkey is hosting Hamas is because it has payoffs from the majority of the domestic audience. Turkish public opinion strongly sides with the suffering of the Palestinian people, and in the era of the Islamic State (IS) threat on its doorstep, it is not likely to consider Hamas a terrorist organization.

In addition, after multiple attempts at diplomatic efforts in the Middle East, Turkey has accepted that it has failed. It gradually switched its focus to supporting nonstate entities, and thus attempting to make inroads on its neighbors. One diplomat, who is not pro-AKP, told Al-Monitor, “Trying to be a major actor in the Middle East and having felt betrayed multiple times, the Erdogan administration decided we have to be Middle Eastern, which means nonstate entities should be considered as serious actors, partners, enemies and allies. Is there a country in the region that has not taken this road? Is it possible to survive ignoring these nonstate actors?”

This may indeed be the case. Even a few Turkish critics question whether “Turkey is replacing Iran” in being the latest supporter of Hamas. The issue that generates some degree of conflict with rules of engagement is because Turkey is also a member of various Western organizations such as NATO, which was not the case for the former supporters of Hamas, i.e., Syria and Iran. In addition, if the support for Hamas is just a part of “becoming an effective player in the Middle East,” it may be a strategy with mixed blessings as the latest PEW Research Center figures demonstrate that support for Erdogan dropped sharply in four of seven Middle Eastern countries. Interestingly, only in Israel are favorable views of Erdogan on the rise, from 14% to 16% — which is attributed to the Israeli Arabs — while in the Palestinian territories Erdogan’s favorability rating has gone down from 74% to 55%.

Turkey’s support for Hamas — along with Qatar — hampers Israel’s ability to isolate Hamas. The Turkish government has been rather frank and “proud” of its engagement with the organization despite all financial and political repercussions. Whether or not its support for Hamas will provide Turkey more regional influence is yet to be seen, but for now it is fair to assume expansion of Erdogan’s domestic powers would translate into further support for Hamas in the near future.