Many Turks believe Donald Trump will become the next US president, and that his animosity toward Muslims and other minorities represents not just popular but also official American views. 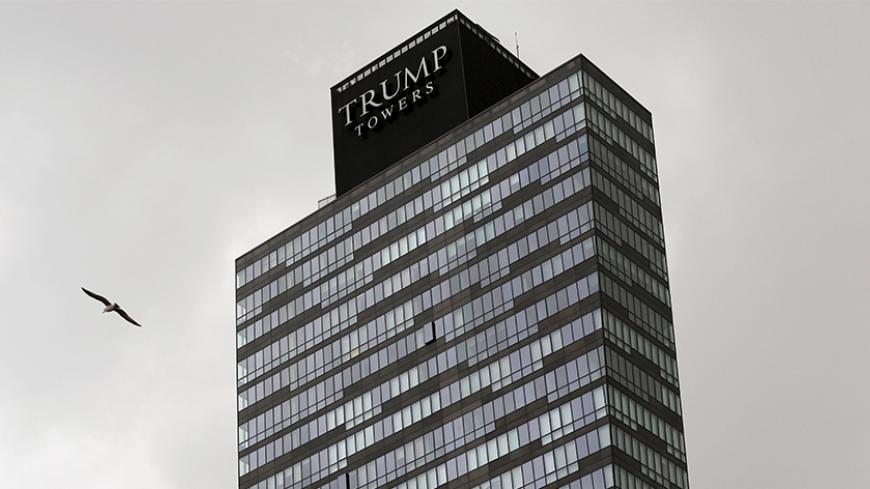 The residence tower of Trump Towers Istanbul, which consists of offices and residence towers with a shopping mall, Dec. 10, 2015. - REUTERS/Murad Sezer

Donald Trump, the Republican presidential front-runner, called Dec. 7 for a ban on Muslims entering the United States. At a public event, Trump read a statement issued by his campaign office: “Donald J. Trump is calling for a total and complete shutdown of Muslims entering the United States until our country’s representatives can figure out what the hell is going on.” While claiming to be the voice of the silent majority, Trump says there is great hatred toward Americans by large segments of the Muslim population.

Trump’s words generated a global outrage, including in his own Republican Party, where various key names asked him to withdraw from the race claiming that by uttering such words he had disqualified himself from the presidency. Yet, Trump neither retracted nor apologized for his statement.

In Turkey, Trump succeeded in unifying opposing camps of the media, all of which reported his words with deep shock and condemnation. Most media commentators in Turkey are convinced that Trump will become the next US president because of his lead in the polls. A joke now heard in the Grand Bazaar in Istanbul goes like this: "Trump will be kicking out a black family from the White House, and it would not be his first time!” Trump’s less flattering photos appeared on Twitter with comments such as, “If this guy becomes the next US president, Muslims won’t be able to enter the US.” These headlines were promptly followed by articles about who Trump is, and what he has said so far. One popular article included 10 controversial Trump statements from his presidential campaign, with a focus on his plans mandating registration for all Muslims in the United States, keeping a database on them and building a wall on the Mexican border.

As reactions on Turkish social media were abundant, Twitter users were quick to remind Trump of his business investments in Turkey and the Muslim world. Several Twitter users called for a boycott of the Trump brand. "Take your partner and your skyscraper and leave Turkey," read multiple tweets. Some stated that Trump was uncomfortable with Islam, but happy to earn profits from Muslims.

Istanbul's skyline has since 2012 been dominated by Trump Towers, which includes an upscale shopping mall; the towers were erected in the heart of Istanbul and opened by then-Prime Minister Recep Tayyip Erdogan. As can be seen in the photo of the grand opening, to Erdogan's right stands Aydin Dogan, CEO and owner of Dogan Holding, a prominent businessman who owns media outlets critical of the Justice and Development Party (AKP).

Pro-AKP media published articles with headlines linking Dogan to Trump, at a time when Trump has generated much fury all over the world; Erdogan’s presence at the opening ceremony of the towers was not mentioned. Islamist daily Yeni Akit published a piece with the headline “Aydin Dogan’s silence about Trump, his Islamophobic partner.” The article claimed, without providing any evidence, that the Turkish social media was calling upon Dogan to cut his links with Trump and stop funding Trump Towers. Similarly, daily pro-AKP Sabah repeated the Turkish social media’s reactions to Dogan about Trump, and highlighted that despite his hatred toward Muslims, Trump is making billions of dollars from his investments in Muslim countries. Sabah’s editorial asked whether or not Dogan would change the name of the towers given the anti-Muslim sentiment.

Zaytung, the satirical website similar to The Onion, tweeted, “Aydin Dogan who had handed out his Freedom [a prominent newspaper owned by Dogan named Hurriyet, meaning freedom] to the government is now expected to change the name of Trump Towers into Erdogan Towers.” Following this media attention, the Trump-Dogan relationship became a trending topic on social media in Turkey, asking why Dogan pays $5 billion to Trump each year and why he has not changed the name of the towers yet.

Finally on Dec. 10, caving under growing social pressure, General Manager of Trump Towers Bulent Kural issued a statement condemning Trump’s words and explaining that they are “evaluating different legal aspects of their relationship with the Trump brand.”

The AKP gave an official reaction on Dec. 9, when AKP spokesman Omer Celik declared Trump’s statement as openly racist and asked for strong reactions from non-Muslim Western nations. Erdogan chimed in on the issue from an unexpected perspective on his official Facebook account. Erdogan did not name Trump, but rather referred to Mark Zuckerberg’s post, the founder of Facebook, and stated he appreciated Zuckerberg’s diligence in differentiating between Islam and terror. Zuckerberg’s post was viewed as a reply to what Trump had said.

Al-Monitor spoke with several small business owners in the Spice Market and Grand Bazaar, most of whom said they are convinced that Trump will become the next president, and that his views are widely shared by the US public and the government establishment. One carpet dealer told Al-Monitor on condition of anonymity, “Americans are racist and they hate Muslims. Because of Islamophobic Trump, Americans had to shut down their consulate here.” Due to high security risks, the US consulate in Istanbul was closed on Dec. 9.

Another shopkeeper in the Spice Market said, “Americans are a wild bunch, they elected Arnold [Schwarzenegger] so why not Trump?” A customer who was shopping for tea added, “Soon enough we will hear Erdogan say on the news, ‘Hey Donald, who do you think you are?’ It will be nice though as Russia has Putin, we have Erdogan and so why should the United States not join in the fun?”

Al-Monitor also spoke with Trump sympathizers. Journalism student Ayse Yilmaz said, “He is honest. He says it as he sees it and that attracts a lot of people who are fed up with political correctness. I mean, look around. We kept the borders open and ended up with 2 million Syrians. No one is happy about their presence here but no one can voice their anger because it is not good Muslim behavior. They are treated horribly, even their kids and women. So it is normal that Trump with his hate speeches will gain more support.” Hakan Akturk, a college student studying sociology, said, “It is also good because Muslims are always labeled as anti-American — but see we are justified because the American government is against Islam. So this is just fair.”

Trump’s comments about banning Muslims entry into the United States received more attention in Turkey than his plan of keeping a registry of Muslims in the United States. When asked about this, medical student Ali Altin told Al-Monitor, “I guess we are kind of used to being constantly under surveillance by our own government, so the Muslim registry did not hit a nerve here. But banning entry [to the United States for Muslims] is serious. I mean, every year thousands of Turks apply for visas to immigrate, to study and to visit the US. I am hoping to obtain a post-graduate degree in the US. If we are disqualified just because of our religion then we will stop looking at the US as the land of free.”

In addition, stories of successful American Muslims were also highlighted on Turkish social media — particularly Mohammed Ali's story and his successful boxing career and conversion to Islam. Ridiculing Trump was also popular; for example, a video where a bald eagle had attacked Trump during a TV show spread quickly online and offline.

Turkey's approach to Trump's hate speech was most visible in the attitude of Nevsin Mengu, a well-respected CNN Turk news presenter, when she asked a pundit on television, “When will the US judiciary prosecute Trump for this hateful rhetoric?” Many Turks can not understand that Republican presidential candidate Trump enjoys freedom of speech under the protection of the First Amendment of the US Constitution. Considering that offending religious sentiments of the public in the Turkish Constitution is a crime, calling for Trump’s prosecution seems plausible.

In an odd way, Turks are accepting Trump’s latest comments as the official and popular American view — which further fuels anti-American sentiment.