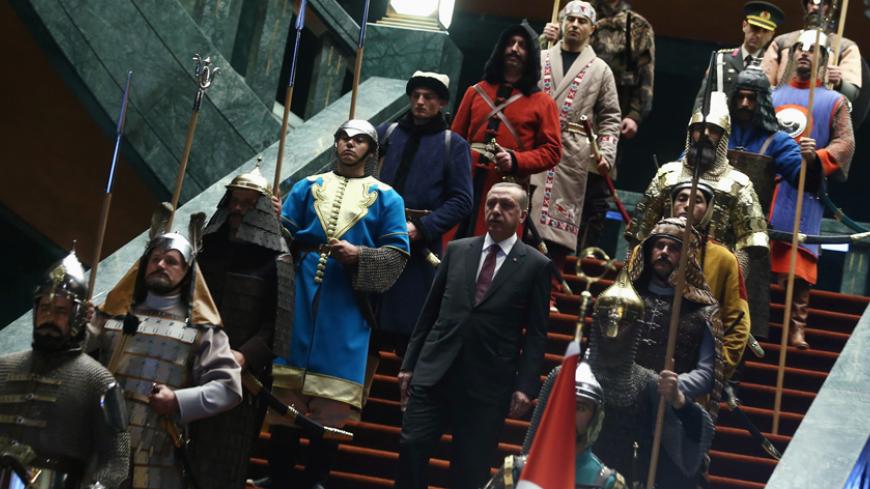 Turkish President Recep Tayyip Erdogan walks down the stairs in between soldiers, wearing traditional army uniforms as he arrives for a welcoming ceremony at the presidential palace in Ankara, Jan. 12, 2015. - REUTERS/Adem Altan

President Recep Tayyip Erdogan is, no doubt, Turkey’s prime opinion shaper, never short of surprises for Turkish and international audiences. While receiving Palestinian Authority President Mahmoud Abbas Jan. 12, he delivered another shot from his unrivaled arsenal. This one, however, produced an unintended consequence. Surely, he did not plan to amuse the public and unwittingly trigger an avalanche of jokes in a society long bereft of humor.

Turkish society, as those familiar with Turkish language and culture would agree, once had a reputation for an abundance of humor. One finds remarkable representations of political satire from the late Ottoman period through the early republic. Under the most adverse conditions of the 35-year reign of Sultan Abdulhamid II (a notorious censor), during the republic's rule by Kemal Ataturk and under Ismet Inonu's leadership (which coincided with World War II), Turkey produced prominent humorists, among them Esref and Neyzen Tevfik. The second half of the 20th century witnessed the immortal Aziz Nesin (notwithstanding his several prison terms for his political views), whose satirical short stories were best-sellers during the 1960s and '70s.

The great Turkish tradition of political satire — which can only be compared with that of Egypt's in the broader Middle East — has been in its death throes for the last few years. Turks, in today's severely polarized political environment, have forgotten how to joke. Thanks to their larger-than-life president, this propensity might be revived.

Erdogan — posing for a handshake with his guest, Abbas, in front of the staircase of Ak Saray (White Palace) in Ankara — was flanked by 16 warriors bizarrely dressed in armor, carrying swords, scimitars and spears and some wearing fake mustaches and thick beards with fearless expressions on their faces. It appears that Erdogan had hoped to evoke public pride and awe in the imperial grandeur of the predecessor states of the republic he now heads.

The unintended consequence, however, was a resurgence of humor.

To people witnessing the spectacle on television, the greeting looked more like a film set stuffed with 16 extras saluting a solemn-looking president. The entire scene was far from awesome or intimidating, and to the contrary, simply looked hilarious. Social media exploded with record-breaking numbers of tweets ridiculing the event.

The most popular humor website in Turkey, Zaytung, had a great two-day run producing tweet after tweet on photographs of the scene. At one point, it tweeted, “We could not find anything to write today. Closing down the shop. Out of business.” With a single stroke, Erdogan had transformed his palace, the target of much criticism because of its 1,150 rooms and cost of more than $600 million — into a comical theater stage set.

Karl Scharro, a satirical phenomenon on Twitter, wrote, “I am officially announcing my retirement from satire because there’s no way I can compete with this. Done.” He kept tweeting, of course, including an imagined conversation between Erdogan and the architect of his palace. At the end of the conversation, Erdogan is demanding of him, “Don’t call me Excellency.” The architect asks, “Something less formal?” Erdogan responds, “Call me The Mightiest and Humblest Ruler of All History.”

The presidency of Turkey and the number 16 have a long association. The official seal of the office has 16 stars arranged in a circle, each one allegedly representing a Turkish empire in history. This is alleged, because it is far from certain that the Turks established 16 empires. Even the most ardent Turkish nationalists contest this. For them, the myth's source is ambiguous, and they claim that at most there were 16 Turkish “beyliks,”​ the principalities that formed in Anatolia between the 13th and 15th centuries after the fall of the Seljuk empire.

One renowned historian, Hakan Erdem, an expert on the history of Turkish nationalism but not a nationalist himself, had said in 2010 on a TV program I was hosting, “Among those 16, some were not Turkish, and some did not deserve to be called states.”

The issue of the 16 has never been a matter of public debate, because as much skill as the Turks have for forming states, they imply that Turkish states do not survive long. Therefore, implicitly, the story of the 16, no matter what they were, is also the story of the demise of each one of them. Thus, no one sees much point in having a public debate on the fate of the previous ones. Whether the 16th is the current Turkish Republic of Northern Cyprus is also a matter of controversy.

Why did Erdogan transform the 16 stars in the presidential seal into 16 farcical guards representing the empires Turks supposedly built throughout history?

The neo-Ottomanism embedded in the mindset of Erdogan, Prime Minister Ahmet Davutoglu and their Justice and Development Party (AKP) is well known. The Islamist-rooted AKP has obviously tried to glorify Turkey’s past as part of its effort to regain regional influence. That glorification mostly means Turkey's imperial Ottoman past, and to a certain extent its Seljuk past, during which Turks were the main bulwark against the invading crusader armies en route to Jerusalem. The imperial Islamic past would be fine for glorification as well, but invoking the mythic 16 Turkish states goes back to Turks' pre-Islamic days. So, again, why would Erdogan seek to evoke this past in such a farcical way?

To ask this question reflects the incurable habit of pundits to always find some rationale for the moves made by people in power. For Erdogan — while engaged in a “peace process” to resolve Turkey's most insurmountable problem, the Kurdish question — there is no tangible interest in reviving and stirring Turkishness by playing on the pre-Islamic period.

The correct answer is to be found in his insatiable urge for grandeur, thus the pompousness, to further enhance his “strongman image.” Why did he want a palace with more than 1,000 rooms at a cost of hundreds of millions of dollars? The same answer might suffice as for any question concerning the new presidential protocol of 16 weirdly dressed guards representing 16 alleged Turkish empires.

It seems, nevertheless, this will become one of the symbols of the “New Turkey” Erdogan and his followers like to talk about. How does one answer the logical question “How can an alleged Islamist revive his country’s pre-Islamic past with such nationalistic pomp?” Islamist presidency à la Turca.