Erdogan engineers his own conquest of Istanbul

The 563rd celebration of Istanbul's conquest was overblown, much like the omnipresent pictures of President Recep Tayyip Erdogan's head on giant posters. 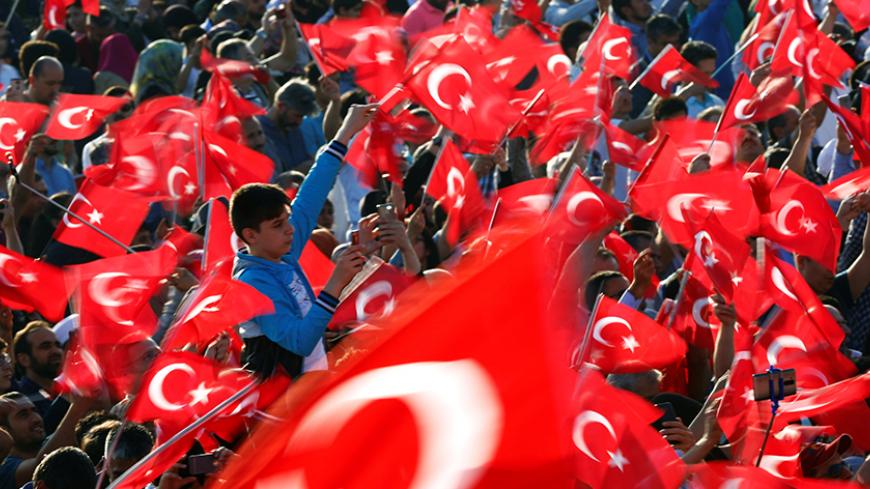 People wave Turkish flags during a rally to mark the 563rd anniversary of the conquest of the city by Ottoman Turks, in Istanbul, May 29, 2016. - REUTERS/Murad Sezer

Anyone trying to reach Istanbul’s international airport on its European side or trying to enter the city after landing on Sunday met with treacherous traffic. The holdups began around noon and continued until almost midnight. In Istanbul, impossible traffic is nothing extraordinary, but on May 29, it exceeded even Istanbul standards.

The reason was simple: People were celebrating the conquest of the city 563 years ago.

It was impossible to miss the huge banners — hanging from bridges, electric poles, anything standing upright — with giant portraits of President Recep Tayyip Erdogan and slogans in Turkish that read “Resurrection, Re-rise.” No eye could miss the number 563 plastered over them.

Big celebrations of the day Ottoman Turks conquered the capital of the East Roman Empire aren't exactly a novelty, yet the 563rd anniversary of the conquest was different from previous years. It was incomparably ornate, overblown and innovative. An expensively produced light and sound show in front of the long Roman walls, supported by digital technology, revisited that fateful moment when Byzantine (East Roman) defenses were breached and the victorious Ottoman forces penetrated the city following a 56-day siege. On that date 563 years ago, the East Roman Empire was terminated and a new era opened in history.

But what is so special about the 563rd anniversary? What made it different than the 500th or even the 550th?

The answer can be summarized in three words: Recep Tayyip Erdogan. The 563rd anniversary was designed to create the perception that Turkey’s mighty president continues the grand and glorious heritage of the great Ottoman sultans.

Mehmet the Conqueror has an exceptional standing in this regard. For pious Muslims, he — being the conqueror of Istanbul, or as it was known then, Constantinople — is the blessed sultan. The fall of Constantinople was a disaster for Christendom but the most glamorous glory for Muslims, establishing their supremacy over the “infidels.”

All the ingenious military tactics the Ottoman army employed, including transporting ships from the Bosporus Strait over land to the Golden Horn harbor, an inlet facing the Byzantine capital, were revisited. Hundreds if not thousands of people dressed up in Ottoman garments took part in the ceremonies and magnificent show. Erdogan's Justice and Development Party spared no expense.

Residents of Istanbul are accustomed to celebrations of the conquest since its 500th anniversary in 1953. According to renowned historian Ilber Ortayli, Turkish nationalists had taken the initiative and forced authorities to start the celebrations. Now Islamists have taken over and reached today’s zenith. The ideological frontiers between Turkish nationalism and Islamism had always been blurred, and the nationalists' lighting of the torch just to pass it on to the Islamists is not surprising from the Turkish Muslim vantage point.

The pompous celebrations this year were attempts to construct a cult of personality around Erdogan's name and persona, much like North Korea's mammoth celebrations for occasions centered around “Supreme Leader” Kim Jong Un, just like those for his predecessor and father, Kim Jong Il, and his grandfather, Kim Il Sung.

From the celebration's format to the disciplined, minute organization and enthusiasm of the participants, the similarities with North Korea were striking. It would not be wrong to say that Erdogan can boast of a strong following among the Turkish population, particularly those of Istanbul’s periphery who attended the celebrations by the tens of thousands with apparent pride in a glorious imperial past.

Whatever the motivation might have been, there is no doubt that the event's attendance and level of organization translates into political capital for the towering figure of Erdogan, consolidating and deepening his mass support. However, there are also those who remained aloof or dismissed the vainglorious display. The non-Muslim minority’s sentiments have generally been expressed with sarcasm.

Some might say such fanfare attempts to overcompensate for a sense of inferiority — to take refuge in the grandeur and glory of the imperial past.

Rober Koptas, the former editor-in-chief of the Armenian weekly Agos, tweeted two days before the anniversary, “[Erdogan and his loyalists] are so distanced from Istanbul that they cannot help but conquer Istanbul every other day, once again.”

Another Armenian journalist, Raffi Hermonn, wrote a blog entry titled, “The conquest of a capital unfinished for 500 years."

For me, the “conquest” of Istanbul has always been a personal issue. Although from one side of my family I am related to Fatih Sultan Mehmet (Mehmet the Conqueror or Mehmet II), my relation with his grand vizier (Prime Minister) Candarli Halil Pasha is more important to those who miss no opportunity to defame me. I am a descendant of the Candarli family, as my surname suggests, and Candarli Halil was executed by Mehmet the Conqueror on allegations that he was bribed and thus was against the conquest of Istanbul. In some nationalist and Islamist circles, he is a traitor.

The historical record is more complicated than that. Steven Runciman, in his seminal book “The Fall of Constantinople 1453,” sets the record straight. Reminding his readers that a few days before the day of the conquest the siege of Istanbul looked doomed to failure, Runciman writes, “On Saturday [May 26], Mehmet summoned his inner council. The vizier Halil Pasha, relying on his record of long and distinguished public service, rose to his feet and demanded that the siege be abandoned. He had never approved the campaign, and events had shown him to be right. The Turks had made no headway; instead they had suffered some humiliating setbacks. … The next to speak was Zaganos [Pasha]. He disliked Halil, and he knew that the sultan shared his dislike. Seeing his master’s look of angry despair at the effect of Halil’s speech, he declared that he had no faith in the grand vizier’s fears. … Mehmet’s spirits rose; this was what he wished to hear. … The sultan then announced that the assault should take place as soon as it could be prepared.”

Let us recall Runciman’s lines, “From that moment Halil must have known that his days were numbered. He had always been a kindly friend to the Christians with the tolerance of a pious Muslim of the old school, unlike such upstart renegades as Zaganos. … Whether he had actually received presents from the Greeks is uncertain. But his enemies now insinuated that this was so; and the sultan was glad to believe them.”

Halil was the first of several prime ministers to be executed. His death became a precedent and took its place in the annals of Turkish history.

At the 563rd anniversary of the conquest, during the extraordinary celebrations, all attention was focused on Erdogan. Nobody remembered my relation to Halil, and I was very happy this time.