Recep Tayyip Erdogan's recent decision to change the date commemorating the conquest of Istanbul from May 29 to May 30 seems to fall into a pattern of altering dates of public holidays to correspond with important political dates — in this case, the June 7 elections. 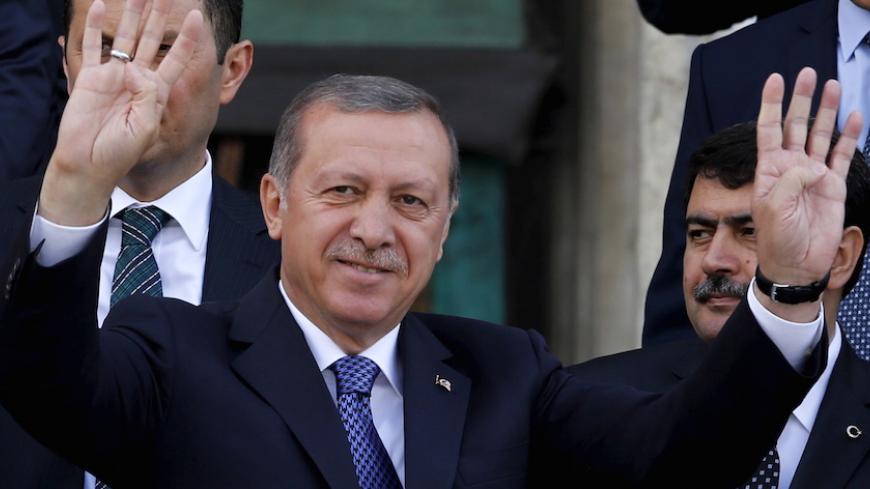 Turkey's President Recep Tayyip Erdogan greets his supporters in front of a mosque after Friday prayers in Istanbul, May 29, 2015. - REUTERS/Murad Sezer

Scores of thick-mustached Istanbul municipality laborers dressed in historic Ottoman army uniforms, marching amid rush hour crowds in modern-day central Istanbul, some pulling replicas of 15th-century galleys by thick ropes, may not look out of place to certain eyes.

The re-enactment commemorates the May 29 holiday of the conquest of Istanbul.

The festivities on May 29 have become livelier than ever, particularly after Istanbul’s municipality began to be run by mayors coming from Islamist backgrounds and starting with the election of current President Recep Tayyip Erdogan as Istanbul mayor in 1994.

Such ardor looked hilarious, at least to some people. Replicas of the original naval galleys used during the siege of Constantinople in May 1453 were used. Under the early summer sun, laborers of the Istanbul municipality dragged these galleys overland using ropes. In the midst of heavy daytime traffic jams in central Istanbul, the sight of the ships moved by scores of sweating people dressed as 15th-century Ottoman soldiers seemed quite amusing for many residents.

Yet, the Islamist mayors of Istanbul for the past 20 years, from Erdogan until today, have taken such festivities seriously, invoking the nostalgia of pious Muslims for the days of glory of the pre-republican, imperial Ottoman Turkey. No day other than May 29 symbolizes the nostalgic grandeur of the gilded age for Turkish society.

In 2015, that will not be the case. Because the celebration of the conquest of Istanbul has been shifted to the next day, to May 30.

Why? Is there newly discovered historical evidence that shows the real date of the conquest was May 30 instead of May 29?

No, nothing to do with that. The reason is simple: Turkey is heading toward a highly important election on June 7. This election is crucial for the political survival of Prime Minister Ahmet Davutoglu. Also, the ruling Justice and Development Party's (AKP) chance to form a single-party government is at stake — a privilege that it has enjoyed since 2002. But, more than anything else, the crucial question is whether the election results could provide Erdogan the opportunity to implement his ambitious project to transform Turkey into a presidential system — a source of concern for the opposition, as the country would end up under an authoritarian one-man rule. And the energetic — if not somewhat panicking — election campaign of both Erdogan and Davutoglu necessitated a mammoth event in Istanbul. May 30 is a Saturday, so the AKP will be able to mobilize its followers from all over Turkey for this seemingly strong show in Istanbul on the eve of the election.

This means, if the interests of the president and the prime minister of Turkey so dictate, even the anniversary of the conquest of Istanbul can be moved one day ahead.

The posters featuring the photos of both leaders can be seen on billboards all around Istanbul. The posters read: “Yeniden Dirilis, Yeniden Yukselis,” meaning, “Resurrection Again, Rising Again.”

In other words, the conquest of Istanbul, the real birthdate of the Ottoman Empire, resonates for the “New Turkey” of Erdogan.

In the historiography of the world, May 29, 1453, is marked as the end of the Roman Empire, which, according to some historians, was the longest serving empire in history, ruling for a total of 1,058 years. For some, the Roman Empire ended when Constantinople was established as a rival capital with the death of Emperor Theodosius in the year 395. The Roman Empire in the East, which later became known as the Byzantine Empire or simply as the Eastern Roman Empire, ceased to exist on May 29, 1453, when the Ottoman Turks, led by the young Sultan Mehmet II, stormed the city and captured it after a long siege.

The new ruling elite turned its back on Istanbul after the declaration of the republic in 1923 and changed the dates of Turkey's National Day and other national holidays. Yet, the commemoration of what is known as the “conquest of Istanbul,” both in official parlance and public use, has never been ignored in Istanbul.

The “fall of Constantinople 1453,” so dubbed in Western historiography, was synonymous with the “conquest of Istanbul.” The victorious Sultan Mehmet is recorded as “Mehmet the Conqueror” (Fatih Sultan Mehmet in Turkish) and along with his grandson Suleiman the Magnificent (or Suleiman the Lawmaker) is considered the greatest figure of the Ottoman dynasty.

The name Mehmet is the Turkish derivation of the Arabic name Muhammad. Therefore, Mehmet the Conqueror is venerated further as being the namesake of the Prophet of Islam. Consequently, the celebration of the “conquest of Istanbul” has always been a source of enthusiasm for the religious segments of Turkish society, including the politically motivated Islamists.

Perhaps one of the best books ever written in English is Sir Steven Runciman’s “The Fall of Constantinople 1453.” The following is how he conveyed what the Islamist municipalities of Istanbul have been trying to recreate:

"[Mehmet’s] ingenious mind had worked out the answer to his problem. It was probably an Italian in his service who suggested to him that ships could be transported overland. The Venetians in one of their Lombard campaigns had triumphantly carried a whole flotilla on wheeled platforms from the River Po to Lake Garda. But there the country had been flat. To transport ships from the Bosphorus into the Golden Horn, over a ridge that rose nowhere less than two hundred feet above sea-level, was a harder problem. But the Sultan lacked neither man-power, nor material. During the early days of the siege his engineers had been constructing a road which leads to the present Taksim Square, then to have turned a little left to the British Embassy to the low ground by the Golden Horn which the Byzantines called the Valley of the Springs and which is known by Kasimpasa … There timber had been amassed to make wheeled cradles for the ships and a sort of tramway; metal wheels had been cast, and teams of oxen collected …

"It was at the first glimmering of dawn on Sunday, 22 April, that the strange procession of boats began. The cradles were lowered into the water and the ships tied on them there; then pulleys dragged them ashore and teams of oxen were harnessed in front of each, with teams of men to help over the steeper and more difficult parts of the road. In every boat the oarsmen sat in their places, moving their oars in the empty air while the officers walked up and down giving the beat …

"Long before noon the Christian sailors on the Golden Horn and the watchmen on the walls above the harbour saw to their horror this extraordinary movement of the ships down the hill opposite to them into the waters of the Horn by the Valley of the Springs."

The "genius" of Mehmet the Conqueror ended with the fall of Constantinople — or, the conquest of Istanbul. At that time there was horror in the eyes of the Christian sailors witnessing this procession in April 1453. Yet, when this practice is re-enacted in the present day over the asphalt-covered avenues of Istanbul during rush hour, the expression in the eyes of the thousands of passersby tends to be amusement instead of horror.

The altering of anniversaries and historical dates has become a feature of Erdogan and the AKP rule. About a month ago, Anzac Day, the anniversary of the Gallipoli Campaign in 1915, was moved to a day earlier, April 24. Anzac Day has been commemorated on April 25 for decades with the participation of the offspring of fallen Australians and New Zealanders. This year, with a lot of fanfare, in the province of Canakkale, a number of heads of state, mainly from Central Asia and Africa, accompanied by Prince Charles of the United Kingdom, listened to a fiery speech from Erdogan.

Needless to say, April 24 is commemorated as "Armenian Genocide Day" in many parts of the world. This year was the centenary of the tragic events.

Moving the historical dates a day before or after has become routine political conduct for Erdogan. According to some, it may appear as a pertness typical of the Third World. However, for many Turks, it is quite worrisome, in the sense that the arbitrariness of their president knows no limits. And thus, it is very perilous for the future of Turkish democracy, which is already jeopardized. And this is no fun.