Is Erdogan losing touch with reality? 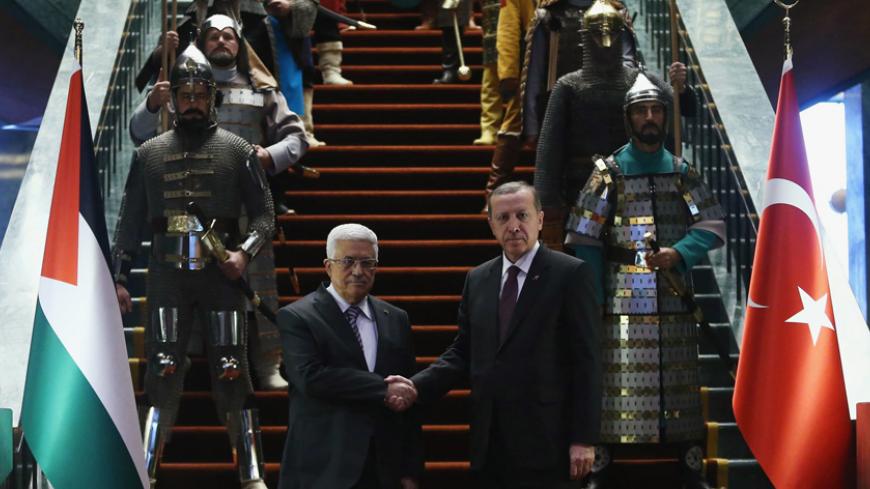 In Turkish culture, the “gate” image is known to symbolize power and dominance. In President Recep Tayyip Erdogan’s “New Turkey,” it is being reinforced with the image of “stairs,” symbolizing the ascent to “prosperity and power.” In this context, Turkey’s newest and most famous staircase is in Erdogan’s pompous new 1,150-room palace. Made of fancy gray marble, the 25-step stairway leads from the palace’s ground floor ceremonial entrance up to the official presidential quarters.

The international audience had a first glimpse of the palace’s staircase on Oct. 31 when The New York Times published a picture of Erdogan posing alone in front of it. On Jan. 12, the same staircase made the headlines again as 16 men, clad in ancient eastern warrior costumes and holding replica swords, maces and spears, lined up on both sides of the staircase, eight on each side. Some were bedecked in chain mail and helmets, sporting fake mustaches and beards.

Climbing down between the warriors in the glimmer of their armor — some golden, others chromate — Erdogan walked to the ceremonial door to greet his guest, Palestinian President Mahmoud Abbas. The pair saluted the Presidential Guard of Honor before walking to the bottom of the staircase, where they posed for a picture, shaking hands. The scene looked surreal with the costumed men — believed to represent Turkic-Mongolian and Ottoman warriors — standing proudly upright in the background.

Later we learned that the 16 men, reminiscent of historical soap opera extras, were soldiers of the Presidential Guard and represented the warriors of the 16 states that Turks had supposedly established throughout history.

The bizarre ceremony, unprecedented in Turkey’s history, instantly became the subject of lampoon on social media, blasted as shallow, ridiculous and problematic, while catching also the attention of foreign media for the same reasons.

I tried to put myself in Abbas’ shoes, wondering what he might have thought of his host’s state of mind when he saw those figurants posing as ancient Turkish warriors who once ruled much of the Middle East. I thought of The New York Times article on Dec. 19, which was headlined "Turkey’s descent into paranoia" and argued that, “Erdogan’s efforts to stifle criticism and dissent show an authoritarian leader living in a parallel universe.”

I had earmarked the piece after reading, and its author must have congratulated himself for making a correct observation days before seeing the surreal welcoming ceremony in Ankara.

Is Erdogan really living in a parallel universe? Is he losing his touch with reality? Is rationality increasingly abandoning his thoughts and actions? Did the ancient warriors in the palace come from the parallel universe where Erdogan is said to be living?

The New York Times editor had diagnosed Erdogan with “living in a parallel universe” following the Dec. 14 detentions of the Zaman daily’s editor-in-chief, Ekrem Dumanli, and the director of Samanyolu TV, Hidayet Karaca, on charges of membership in a terrorist organization. Both media outlets are known to be close to the Islamic-leaning Gulen movement, on which Erdogan has opened a fierce war. But even before the Dec. 14 onslaught on the Gulenist media, a number of incidents had already left many with the impression that Erdogan might be living in a parallel universe.

One of the most striking examples was Erdogan’s address to a Nov. 15 gathering of Latin American Muslim religious leaders in Istanbul, in which he declared that not Columbus but Muslims had discovered America.

In another memorable speech, Erdogan, addressing a gathering called “Women and Justice Summit” on Nov. 24, said, “You cannot make women and men equal. That’s against nature.”

Equally remarkable was his Dec. 8 speech at a meeting of religious authorities in Ankara, in which he made clear he was behind a controversial initiative to make the Ottoman Turkish language a compulsory course in schools. “Whether they like it or not, Ottoman will be taught and learned in this country. This religion has an owner, and this owner will preserve this religion as long as the world goes round. Our duty is to live up to the legacy. If we manage to do that, the sectarian conflicts will come to an end. If we manage to shrug off the roles that have been assigned to us and become ourselves, justice will prevail across the world,” Erdogan said.

The anti-Western, oft-conservative, Islamist and Ottomanist tone of Erdogan’s rhetoric has kept growing. He never misses a chance to speak in this context, even at wedding ceremonies. On Dec. 22, for instance, he attended a wedding in Istanbul, at which he said, “They committed the treason of birth control for years in this country, seeking to dry up our progeny. The strength and significance of progeny is important not only economically but also spiritually.”

The list of such examples is long. If we assume that Erdogan lives in a parallel universe, as The New York Times suggests, this universe, too, has its own political rationales.

Let’s take a closer look at the Erdogan-style Ottomanism, for instance. The warrior representing the Ottomans on the presidential staircase was neither a janissary nor a soldier of the modern Nizam-i Cedid (New Order) army, which the Ottomans set up imitating Western models in the 18th century as they suffered setbacks against the West. Clad in chain mail, this warrior represented the Ottoman soldier of the 16th century, the period of the empire’s largest territorial expansion.

This was a symbol illustrating the “Ottoman paradigm” in Erdogan’s mind. He has consistently negated the Ottomans’ modernization drives and Westernization movement that began in the first quarter of the 19th century, crafting a mythology of Ottomans at the zenith of their power. In today’s Turkey, however, those Ottomans lack any applicability as a model.

Essentially, Erdogan is trying to build an authoritarian Islamic regime in Turkey under what he calls “the 2023 goal,” buying the support of conservative and nationalist masses with slogans and images of a superficial and illusionary Ottomanism. This Ottomanism is kitsch, just as the costumed warriors in the palace. Yet, it resonates with the lumpen segments of the ruling party’s grassroots.

This type of conservatism has nothing to do with “conserving” anything. On the contrary, “a new form of popular understanding of religion is being created,” as Istar Gozaydin, a Turkish scholar renowned for his work on religion-state relationships, points out in a Dec. 28 interview with Milliyet. Hence, Ottomanism here serves only as a package, and what the package contains is Islamism.

The anti-Western and Ottomanist rhetoric has contributed greatly also to changing Turkey’s political culture in the way Erdogan wants it to change.

The second, more recent and important reason for Erdogan’s Ottomanist and Islamist outbursts is related to the fierce struggle he has waged since the December 2013 corruption probes, which have been rightly attributed to the Gulen movement.

Erdogan is trying to convince his electorate that he is the best Muslim and that the Gulenists are hypocrites, which has led him into a religious contest with himself. More Islam and more Islamism are meant to obliterate the deep marks left by the corruption allegations and evidence against his party and government. The next general elections in June represent a key motivation in his efforts.

Never missing a chance, Erdogan speaks on and on, almost on a daily basis, reconstituting his power and building a parallel universe, which is now complete with 16 ancient warriors.