Turkey’s giant Directorate of Religious Affairs, which runs the country’s 85,000 mosques and employs 122,000 people, has assumed an increasingly active role in the government’s foreign policy. 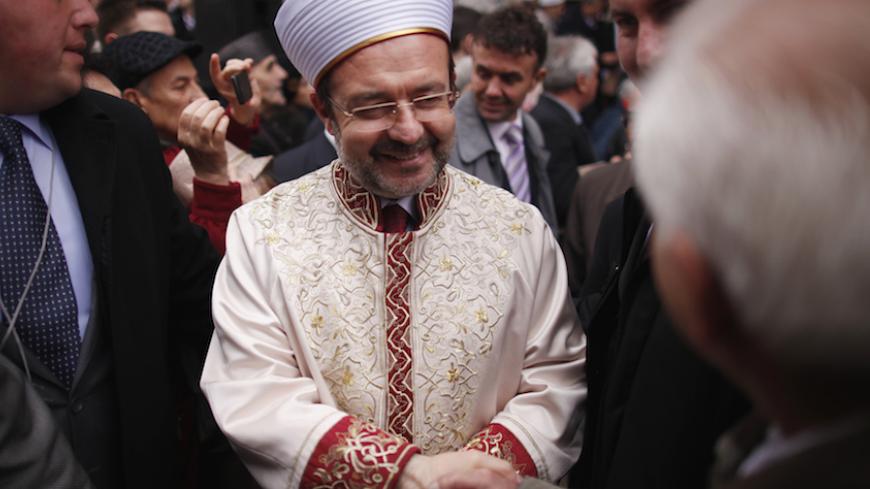 Grand Mufti of Turkey Mehmet Gormez shakes hands with an onlooker after an inauguration ceremony in front of the Gazi Husrev Begova Mosque in Sarajevo, Nov. 15, 2012. - REUTERS/Dado Ruvic

Turkey’s Directorate of Religious Affairs is known for its massive budget and huge network of mosques, muftis and imams, through which it controls religious affairs in the most remote villages. Enjoying generous privileges from the ruling Justice and Development Party (AKP), the institution — which is affiliated with the Prime Ministry and provides religious services according to Sunni Islam — has become a major instrument in shaping the “devout generations” imagined by President Recep Tayyip Erdogan. But not only that. In another function that has drawn little attention, the directorate has emerged as an efficient government tool in advancing Ankara’s foreign policy agenda.

For years, the Directorate of Religious Affairs has carried Ankara’s messages to Muslim believers across the country through the standardized sermons it supplies to the imams of Turkey’s 85,000 mosques, who preach almost exclusively the Sunni Hanafi faith and make up the majority of the directorate’s 122,000-strong personnel. In recent years, however, the directorate has evolved into a body that takes Ankara’s message even farther, beyond the country’s borders.

A glance at its website is enough to see how active the directorate has become internationally. The institution’s 2013 activity report, available on the website, describes a transboundary agenda of “shaping and spreading an objective perception of Islam around the world.” It says the directorate aims “to present an understanding of Islam, which is based on Islam’s scientific foundations, and lead the efforts to spread it.” It notes that 200,267 meetings, conferences, panels and symposiums were organized abroad as part of this objective.

The directorate’s wide range of overseas activities includes 80 visits paid by official delegations to Islamic countries or countries with Muslim communities, as well as joint initiatives in 79 countries, mostly Turkic republics in Central Asia and African nations, to provide mosques, schools and other educational services. A total of 3,791 students have been brought from the Balkans, the Turkic republics and Africa to study in Turkey’s imam-hatip religious high schools, Quranic courses, and post-graduate and doctoral programs.

Observers of the directorate's activities say the institution has notably increased its influence over Islamic institutions in non-Arab Muslim countries, especially in the Balkans.

On March 9, the website’s “news” section announced that the directorate's president, Mehmet Gormez, was visiting Sudan. Most of the news items pertain to Gormez, who is naturally the leader of the directorate's new foreign policy activism. The theology professor, who has headed the institution since November 2010, has a busy agenda of international contacts and is frequently featured in the media. Since the beginning of 2015, he has received the ambassadors of Britain, Mali, Sudan and Thailand, hosted other official guests, mostly religious figures, from Kazakhstan, the Ivory Coast, Lithuania, Bosnia-Herzegovina, Poland, Russia’s Republic of Tatarstan, Cambodia, Azerbaijan and Tanzania’s Zanzibar, and took part in two international meetings of a religious nature.

On Feb. 20, for instance, Gormez received a delegation led by Sheikh Hamid bin Abdullah, head of the International Al-Quds Institute, and said during the meeting, “If the holy al-Quds [Jerusalem] is calling for help, then every Muslim has to heed this appeal.” Since the beginning of the year, he has also appeared as a special guest on five television programs.

In a paper on the directorate’s “structural, social and political economy aspects,” published in December 2014 by the Helsinki Citizens' Assembly, academic Nil Mutluer notes that Gormez “differs from his predecessors with his close interest in current affairs and his choice of taking pronounced attitudes on political issues.”

In this context, it’s worth recalling how Gormez reacted to the protest march in Paris after the Charlie Hebdo massacre: “Twelve million suffering people have been massacred and annihilated in the Muslim world in the past decade, while 12 people were brutally killed in Paris last week [in a murder] that no believer or sane person could accept. Yet, we watched [with regret] how the same humankind, which had kept mum over the killing of 12 million people, rose up over the murder of only 12 people.”

Gormez also voiced his objections to the Haghia Sophia being transformed into a museum by the young Turkish Republic in 1935, after the Ottomans had converted the church to a mosque following their conquest of Istanbul in 1453. “Ayasofya [Haghia Sophia] is an Islamic shrine of significance and of huge symbolic value for this nation, for this civilization, for this history [of ours] and in fact for the whole world. It is not a museum, it’s not a church either,” Gormez said in a September 2013 television interview.

According to Istar Gozaydin, a prominent scholar of law and political science, the directorate is the heir of a tradition that has thrived in these lands since Byzantine times.

In a Feb. 19 interview with Al-Monitor, Gozaydin offered the following historical perspective: “In the Byzantine era, temporal rulers controlled religion. This continued also under the Ottoman Empire. The sultan appointed and dismissed the Sheikh al-Islam [who governed religious affairs]. The relationship between state and religion has never changed in these lands. The Religious Affairs Directorate was created on March 3, 1924, to replace the Ministry of Religious Affairs and Endowments, which was dismantled along with the caliphate. The republic’s founders saw religion as a rival to their modernity project. Yet, they did not ignore religion altogether, aware of its importance. So, they opted to have it as a built-in unit in the government system, both to control it and prevent it from gaining prominence in the future. The directorate also has a mission of providing knowledge. But that’s something one does according to a certain reference. And the reference here is Sunni Hanafi Islam. It has been so since Ottoman times.”

Gozaydin stressed that, just like the republic’s founders, the AKP government imagines a certain type of society. No doubt, secular Kemalists and Islamists imagine very different societies, but they use almost the same tools. “The republic’s founders produced a religious knowledge that fitted the society they sought to create. Similarly, the directorate today is being used as a means to shape the society and family that the current government imagines. It’s the ideological tool of the government,” said Gozaydin.

In the AKP’s Turkey, where the government’s foreign policy has become an extension of its domestic policy, the directorate's expanding its major domestic clout to the foreign policy realm was a natural outcome. The directorate "is seeking an active role in Turkish foreign policy," Gozaydin said. "Wielding influence in regions where the Ottomans ruled in the past, it is an institution of international significance. So, it has come in handy for New Turkey’s cultural imperialism."

According to Mutluer, the directorate’s budget grew by a massive 176% in real terms from 2002 to 2012 under the AKP. It was the largest budget increase the institution has received in republican times, outstripping the increase rates even in the education and health budgets. In 2012, for instance, the directorate budget amounted to 8.82% of the health budget, up from 6.29% in 2002. Similarly, directorate expenditures per capita amounted to 0.3% of the gross national product in 2012, up from 0.16% in 2000.