Turkey's Web watchdog is turning into a "wicked" censorship monster that can arbitrarily target any website, from global prosperity indexes to LGBT forums. 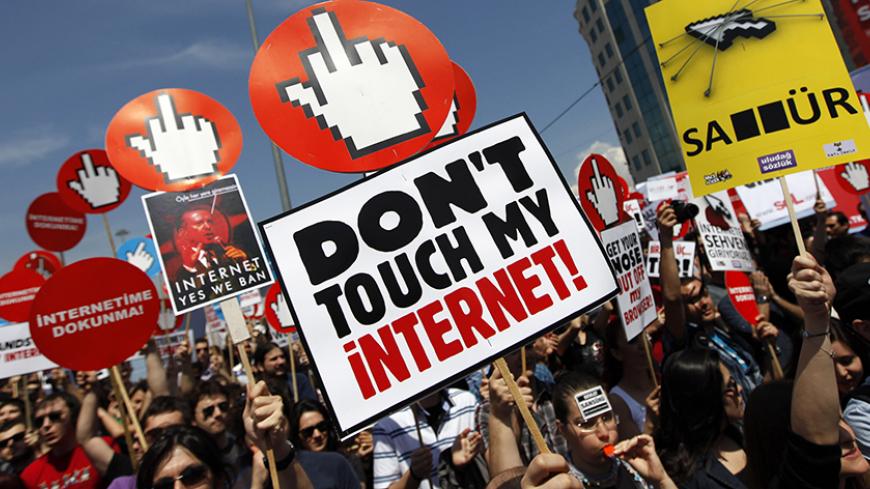 Demonstrators hold placards with some featuring a picture of Turkey's Prime Minister Recep Tayyip Erdogan during a protest against Internet censorship in Istanbul, May 15, 2011. - REUTERS/Murad Sezer

When did Turkey's ruling Justice and Development Party (AKP), which has been praised by international media for its democratic reforms during its first few years in power, start to turn into what it is today — a ruthless political machine that cracks down on free speech with increasingly potent tools, insisting on its "unconstitutional" course as was seen in the Jan. 28 debate at the parliament?

It can easily be argued that the AKP's reform drive had already stopped in 2005, before its truly authoritarian tendencies materialized in 2007 with a more draconian approach toward media following its second electoral victory.

Soon afterward, the government pressure on newspapers started to target social media, too. Daily Hurriyet columnist Ferai Tinc had quoted me in 2008, when, as a foreign news editor then, I was complaining of a newly adopted Turkish ban on Blogger, which deprived my colleagues and me of an important news source.

Tinc was an exception in seeing the coming disaster in Turkey, though. The Turkish media, and particularly traditional outlets, failed to react. Opposition parties did not even seriously question the ruling of a court in Diyarbakir that was the basis of the ban.

"First they came for the bloggers. …" Then, I was personally victimized when my own website was blocked in 2011. I was not the direct target of the ban, though. Once again, Turkish authorities had just opted to enforce a blanket ban on all blogs, because a single blog had infringed copyright laws.

Out of curiosity, I got acquainted with Turkey's digital censorship bureaucracy, which was still in its infancy in 2012, when the United States and Europe were debating freedom-curbing initiatives such as SOPA, PIPA and ACTA. "The real problem in Turkey today," I had written in a February 2012 column, "is the fact that our bureaucracy can arbitrarily block websites without a court order."

As an example, I cited how the website of Rolling Stone, a New York-based biweekly magazine on popular culture, was blocked in Turkey for an undisclosed reason. Authorities unblocked Rolling Stone only months afterward, and again, without any explanation.

The Rolling Stone case encouraged me to find other websites that were strangely blocked in Turkey. For instance, why was access from Turkey to Venus.com, a bikini seller, blocked? I tried to contact Turkish authorities to learn their reasoning for each case, but I often got lost in the Kafkaesque labyrinths of bureaucracy.

The simple questions I lodged under the Law on the Right to Information were rarely answered by officials. As International Press Institute's "Accessing Governments" report showed in 2009, Turkey was among the worst countries at providing information to journalists.

Then I found Engelli Web, a civil society initiative that lists blocked websites in Turkey with an efficient method that involves crowdsourcing and verification. Currently, it lists more than 65,000 websites alongside corresponding rulings.

Only 6.8% of these websites have been blocked by Turkish courts, while 93.2 percent of them are blocked by Turkey's Telecommunications Directorate (TIB), the government body that the AKP keeps trying to equip with even more extraordinary powers despite the Constitutional Court ruling that overturned a similar attempt last year.

Child pornography, which is frequently cited to justify the draconian measures of the TIB, consists only 0.5% of websites blocked by Turkish officials; 90% of those websites are blocked due to "obscenity," despite the existence of family filters of Turkey's service providers mandated by the government.

Out of the remaining 10% — some 6,500 blocked websites — those that violate Turkey's gambling ban and infringe its copyright laws lead the list. Still, it is harder to explain why the rest, hundreds of domains and at least 1,500 IP addresses, have ever been blocked. We don't even know exactly when more than 1,300 websites were blocked in Turkey.

Here are some of the bizarre examples sent to me by the creator of Engelli Web, who prefers to remain anonymous:

The balance between civil liberties and national security is a matter of debate around the world, particularly in the new media age. However, the prospects may be even darker for democracy in today's Turkey, where a Kafkaesque bureaucracy is creating an impromptu monster for digital censorship.

A Turkish official whose input was used in the draft law that started to be debated at the parliament Jan. 28 has told me on condition of anonymity that the process to increase TIB's legal powers was a necessity for Turkey. "We are learning on the fly, so there might be errors. But we need to do it to ensure the security of our citizens," he said.

And we are talking about a unique country where many citizens agree with their government in approving of that Kafka quotation: "It's often safer to be in chains than to be free." But I personally believe that not only free speech advocacy groups, but also Internet giants including Google, Facebook and Twitter should not be intimidated by Turkey's Frankenstein.

For sake of democracy, everyone should side with Turkish citizens' freedom of speech, doing their best to legally challenge Turkish authorities' attempts of censorship, instead of unquestioningly approving official requests and narratives. Most of us have failed in this endeavor so far.