Armenia’s entry in the Euroasian Economic Union has encouraged Prime Minister Ahmet Davutoglu to implement his formal apology and open the border with Armenia before April 24, 2015, the 100th anniversary of the genocide. 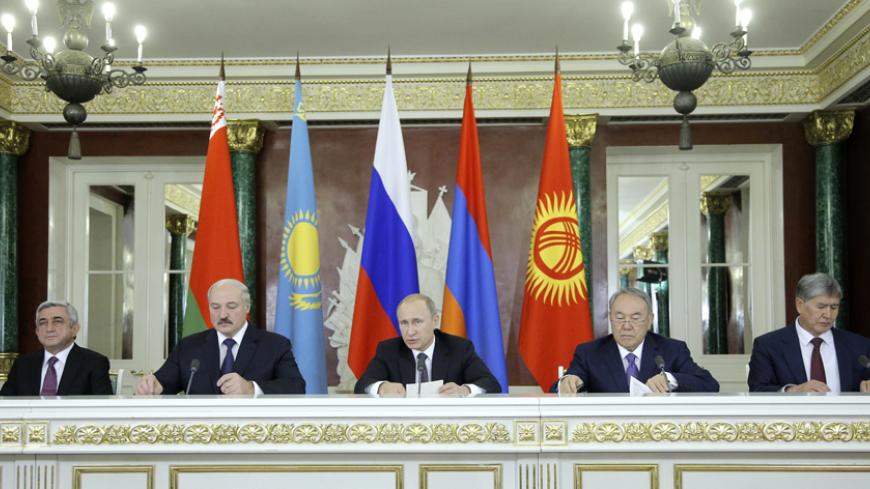 At the latest Eurasian Economic Union (EEU) summit held in Minsk, Armenia became a regular member of the organization, joining Russia, Kazakhstan and Belarus. Kyrgyzstan will officially join the EEU in May.

The Armenian diaspora, gearing up for a worldwide anti-Turkey campaign on April 24, for the 100th anniversary of the Armenian genocide, may actually be disappointed by Armenia’s signing up for the EEU.

There are rising expectations that Turkish Prime Minister Ahmet Davutoglu will revitalize the Armenia opening he had designed as foreign minister in 2009. Signs that the Justice and Development Party (AKP) government will open the Armenia border before the anniversary are gaining credence.

Armenia, after entrusting its national and military security to Moscow with the Collective Security Agreement it signed with Russia in 1992, by joining the EEU as of Jan. 1, is also entrusting its economic future to Russia.

With its endorsement of the EEU charter, Armenia has declared that it has distanced itself from the US-EU bloc that it was counting on to put pressure on Turkey and, in a way, closed the book on Europe.

When Davutoglu was foreign minister, as part of his Armenia opening policy he signed protocols with Armenian Foreign Minister Edward Nalbandian on Oct. 10, 2009, that called for opening their common border within two months. This process collapsed, however, when the Armenian parliament referred the protocols to Armenia's Constitutional Court and made demands for territorial concession and admission of genocide preconditions.

Armenia, which has the weakest economy in the South Caucasus, has problems with all its neighbors except Iran. Borders with Turkey and Azerbaijan are sealed. Although it is a member of the EEU, it has no common borders with the three current EEU members. It is very difficult for Armenia to develop its economic trade and improve the welfare of its people under these conditions.

For Armenia, the gateway to the outside world is Turkey. In 2013, Armenia, under Russian pressure, abandoned its idea of signing the Economic Cooperation and Partnership Agreement with the EU and chose to go with the EEU.

After Armenian President Serzh Sargsyan signed the accord with the EEU, Russian President Vladimir Putin noted that the agreement would provide positive inputs to Armenian’s economy within the first couple of years, its growth trend would improve, people’s real income would increase and employment would rise. Today, about 1 million Armenians are working in Russia as laborers.

Armenia, which had pinned its hopes on Western countries and the political-economic effectiveness of the Armenian diaspora, by signing the Minsk accord has declared that integration with the EU is on the back burner and Russia is in the forefront because of political and economic realities.

It is reasonable to expect that the good economic relations between Russia and Turkey will positively affect Armenia-Turkey relations. Although the 2009 Zurich protocols did not work out, Davutoglu is pursuing the Armenia opening with other moves. It appears that he has also persuaded President Recep Tayyip Erdogan.

Erdogan’s unexpected reconciliation message before April 24, 2014, was one such move. Erdogan, who was then the prime minister, expressed condolences for the suffering of Armenians and for their losses. This was a preliminary step. It should not be a surprise if this year there is another message of apology, this time from Davutoglu.

There are other concrete signs of Turkey proceeding with its Armenia opening. Last year, Turkey allowed Armenians fleeing the civil war in Syria to pass through Turkey.

For the Armenians, the second sacred symbol after Mount Ararat is the city of Van, which is recognized as the former capital of Armenia. Restoration of the Akdamar Church in Van was realized with $1.5 million in donations by Armenians of two countries.

In April 2013, Van-Yerevan direct flights began. Although the flights ended after the bankruptcy of the Armenian Armavia airlines, these are surely signs that Davutoglu is committed to the Armenia opening.

Another important sign was in 2013 when Sargsyan was elected president. One of the first to congratulate him was Turkey’s President Abdullah Gul.

In 2013, Davutoglu said in a parliamentary speech, “Our country believes normalizing relations with Armenia will contribute to cooperation and stability in the southern Caucasus,” giving rise to more hopes for new steps.

Davutoglu, by introducing the concept of “just memory,” has indicated that the AKP government has the Armenia opening on its agenda.

Davutoglu described the just memory concept: “Just memory means not to treat history unilaterally. We must empathize to understand what the Armenians went through, what they felt. But they, too, have to respect our memory.” Davutoglu’s appointment of Etyen Mahcupyan, a Turkish citizen of Armenian descent, as a senior adviser was a distinct message. Moreover, Davutoglu’s recent declaration that Turkey will allow construction of a new church in Istanbul for the first time in the Republic era is also important for the process.

Armenia’s EEU membership will help expedite and facilitate Davutoglu’s steps. It will not be easy for Turkey, which is experiencing serious economic and political problems with the EU, to reject an EEU that will be a union with 170 million in population and a $2.5 trillion economy. Armenia’s situation is not any different.

What is left is to persuade Azerbaijan. Russia’s clear decision to give political-military-economic support to Armenia with the EEU membership will certainly make Azerbaijan ponder hard. It may also expand Davutoglu’s room to maneuver.

Although there is a prevailing perception that the EEU is a project to resurrect the Soviet Union, Putin supported Kazakhstan President Nursultan Nazarbayev’s recommendation to make Turkey a member of the EEU.

Obviously, the pressures by the United States and Western countries on Turkey to recognize genocide and to open the Armenia border will intensify as April 24 nears.

In the United States, where 43 of the 50 states have recognized the Armenian genocide, a new resolution on genocide in Congress will force President Barack Obama to veto it because of the tense and troublesome Turkey-US relationship. Such a decision by the Congress could endow the Armenian diaspora with legal grounds that could lead to Turkey's facing hundreds of thousands of compensation claims.

Davutoglu, in full awareness of the economic-diplomatic-political implications, is getting ready to take the steps for an Armenian apology and opening the border before the June 7 general elections in Turkey.

2015 is increasingly appearing to be a year to open new pages in Armenia-Turkey relations.