Turkey extends hand, but no apology, to Armenia

Turkey is making a fresh move to normalize ties with Armenia as the clock ticks down to the 100th anniversary of the Armenian genocide in 2015. 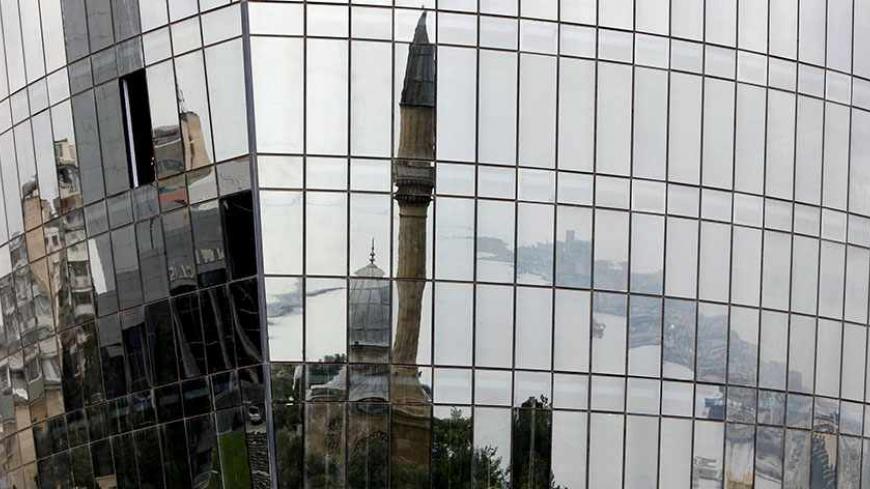 A mosque and the city waterfront are reflected in a new building in the Azeri capital Baku, Sept. 8, 2012. Rising tension between Armenia and Azerbaijan could unleash a new war over the disputed Nagorno-Karabakh region that spreads beyond the countries' borders and has global significance. - REUTERS/David Mdzinarishvili

Turkey’s plan to normalize ties with Armenia, the most critical part of its “zero problems with neighbors” policy, went to the dustbin after Ankara made a surprise U-turn for the sake of Azeri gas. Bilateral relations had been severed in 1994 over the Nagorno-Karabakh war and the Armenian occupation of 20% of Azeri territory.

Following two years of secret talks, Turkey and Armenia signed two protocols aimed at normalizing ties in Zurich on Oct. 10, 2009, attended by the US and Russian foreign ministers. Even though the protocols made no reference to Nagorno-Karabakh, Prime Minister Recep Tayyip Erdogan put forward a condition that Armenia should take a step toward resolving the conflict. In Armenia, meanwhile, the Constitutional Court approved the protocols with reservations before sending them to parliament for ratification. Turkey protested that the court’s reasoning went “against the spirit of the protocols.” Finally, Armenian President Serzh Sarkisyan announced Armenia was suspending the ratification process on the grounds that Turkey was putting conditions on it.

Three years on, Turkey is seeking to revive the Armenian dossier. The first signal came on Nov. 6 from Foreign Minister Ahmet Davutoglu. In a briefing to parliament’s Foreign Affairs Commission, he said, “Our efforts ahead of 2015 are continuing at full speed. Our demand is that [the Armenians] pull out from Karabakh. We are expecting a move on this issue. If it happens, both the border crossing and the railroad will be reopened and other relations will follow. But we want to do this together with Azerbaijan,”

Turkish Foreign Ministry sources told Al-Monitor that the “second Armenian opening” was discussed with Azeri President Ilham Aliyev when he visited Ankara on Nov. 12 and was decorated with a state medal, as well as during Davutoglu’s visit to Washington Nov. 18-19 and Erdogan’s meeting with Russian President Vladimir Putin in Saint Petersburg Nov. 22.

“We are open to all creative ideas that could pave the way for regional peace,” one diplomat said, stressing Ankara’s hope that the Azeri and Armenian governments would be also open to “creative” ideas, now that they have both overcome their election tests. “For every step we take, we speak with Azerbaijan and reach consensus,” the diplomat added. The failure of the 2009 protocols owed much to Azerbaijan’s tough objections.

Several ideas have surfaced ahead of Dec. 12, when Davutoglu will be in Yerevan to attend a gathering of the Black Sea Economic Cooperation Organization. According to media reports, Ankara has outlined the following new proposal: If Armenia pulls out from at least two of the seven regions it occupied in 1993, Turkey will reopen one border crossing. Aliyev was reportedly briefed last month about Turkey’s proposal to reopen the border in return for Armenian withdrawal from parts of the occupied territory. The Armenian Aravot newspaper, meanwhile, reported that Armenia had conveyed its own three-item road map to Davutoglu through secret diplomatic channels in early December. The three conditions the newspaper listed are as follows:

A Turkish Foreign Ministry official told Al-Monitor that the ministry is willing to discuss fresh ideas with its Armenian counterpart in Yerevan, but denied that Yerevan had relayed its own road map. The ministry is reluctant to openly confirm the Turkish proposal, but Turkish pro-government newspapers describe it as “Turkey taking action for both peace in the Caucasus and normalization of ties with Armenia.”

Could Turkey’s new move yield results? The Armenian government is unlikely to accept a proposal that falls behind the 2009 terms, as it already had difficulties in explaining to its public why the protocols did not include an apology for the genocide. This is also evident from the snippy remarks of Armenian Deputy Foreign Minister Savarsh Kocharyan: “If Turkey wishes to have civilized relations with Armenia, it must recognize the genocide and open the border. Instead of making provocative statements that could hurt the prospect of any positive development, the Turkish foreign minister should use his visit to Yerevan to visit the genocide memorial and pay respect to the genocide victims.”

And that’s the point where the whole process becomes deadlocked. For any Armenian, recognition of the genocide is the one and only doorstep to friendship, whereas Turkey is scrambling to go a different route.

Davutoglu’s new Armenian opening has little chance of success. The initiative will no doubt be seen as a maneuver to counter the pressure that will pile up on Turkey ahead of 2015, the 100th anniversary of the genocide. Listening to the debates in parliament is enough to reach this conclusion.

Deputy Prime Minister Bulent Arinc, speaking Nov. 5 at the parliament’s Budget and Planning Commission over the budget of the Turkish History Institution, explained how Turkey would counter the Armenians’ international campaigns for 2015.

“2015 is the 100th anniversary of the Gallipoli battle on the one hand, and the so-called Armenian genocide allegations on the other. We are working seriously on that. Work is underway on symposiums, conferences, panels, book publications and documentaries,” said Arinc. “But at the same time, we are working also on some very special initiatives in other realms that could have an impact on all countries around the world in terms of public diplomacy.” The institution, he added, would organize 14 “scientific meetings” in 2014 and allocate 8,239,000 Turkish lira ($4,045,000) for its activities.

Making such preparations for 2015 sours the positive impact the new opening could make on Armenians. The Turkish Foreign Ministry believes the political atmosphere in Yerevan is favorable for a new opening, but given the traumatic conditions the 2015 anniversary is already creating and Armenia’s deepening relations with Russia, the prospects for Ankara-Yerevan ties are far from promising.

Yerevan has fully delegated its security to Russia with a decision to extend the Gyumri Base treaty until 2044 and decided to join the Russian-led Eurasian Union instead of entering into a free-trade agreement with the European Union. Both moves stand out as discouraging external factors with respect to Turkish-Armenian rapprochement.

Restoring the 2009 momentum seems difficult in any case. Sadly, the barrier in front of Turkish-Armenian peace is rising even higher ahead of 2015, rivaling Ararat Mountain itself.