Turkey and Armenia's third round of rapprochement talks have produced little of substance as Armenians protested by in the thousands and called for Prime Minister Nikol Pashinyan to resign. 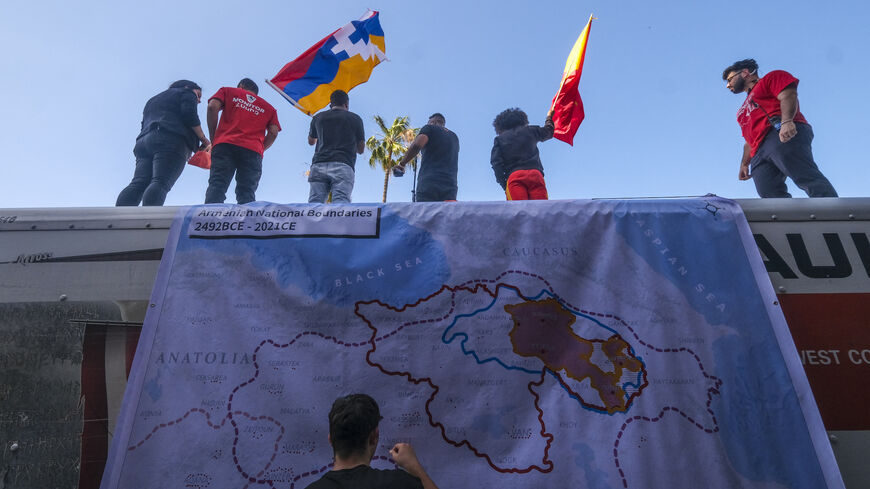 People wave Armenian and Republic of Artsakh flags as they protest outside of the Turkish Consulate on the anniversary of the Armenian Genocide in a demonstration organized by the Armenian Youth Federation of the Western United States on April 24, 2022, in Beverly Hills, California. - RINGO CHIU/AFP via Getty Images

Turkish and Armenian negotiators met in Vienna Tuesday for a third round of talks aimed at establishing diplomatic ties and reopening the long-sealed land border between the two countries as thousands of Armenians demonstrated against the effort and called for Prime Minister Nikol Pashinyan to step down.

The talks that began in January, more than a year and a half after Azerbaijan defeated Armenia with Turkey’s help in a bloody 44-day war over the disputed Nagorno-Karabakh enclave, have yet to yield any substantial results. Turkey is resisting Armenian demands for confidence-building measures such as allowing diplomatic passport holders from both sides to use the land border for future meetings that would be held either in Armenia or in Turkey.

The lack of movement was reflected in official statements put out by Yerevan and Ankara.

The Turkish Foreign Ministry said the envoys had “a sincere and productive exchange of concrete views and discussed possible steps that can be undertaken for tangible progress in this direction.” The Armenian side issued an identical statement saying that the envoys had “reiterated their agreement to continue the process without preconditions.” Diplomatic sources briefing Al-Monitor confirmed no progress had been made, but said that the meetings will continue.

The outcome prompted a flurry of mockery on social media, with photos of Turkish negotiator Serdar Kilic, 64, and his Armenian counterpart Ruben Rubinyan, 32, as they would look in their “39th meeting.” 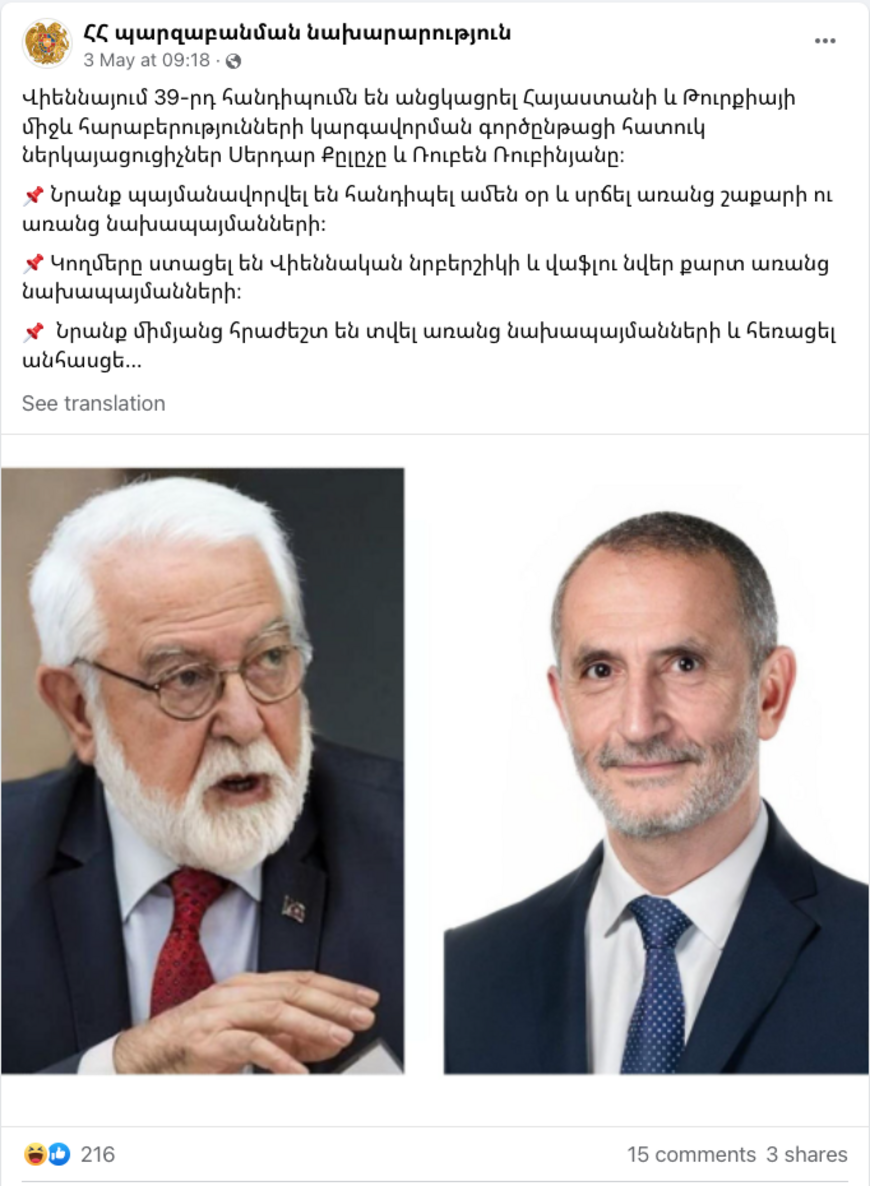 (A Facebook post, coming from a mock account named the "Ministry of Clarification," jokes that the two sides agreed to "meet every day and have coffee without sugar and without conditions")

Turkey is thought be holding back in order to allow Azerbaijan to press its advantage to extract further concessions from Armenia before signing a final peace treaty. They include getting Armenia to shelve all and any claims over Nagorno-Karabakh, a majority-Armenian enclave that is internationally recognized as Azerbaijani territory.

The war in Ukraine has bolstered confidence in Baku and Ankara alike, with Turkey’s geostrategic value and Azerbaijan’s vast energy resources back in the spotlight.

Armenia seized control of Nagorno-Karabakh in a previous war in the early 1990s as the Soviet Union collapsed along with seven adjacent regions. In the latest war in the fall of 2020, it lost four of those regions along with a third of Nagorno-Karabakh. It ceded the remaining three regions as part of a truce brokered by the Kremlin in November that year. The war marked the biggest humiliation the nation of 2.9 million has suffered since formally declaring independence in 1991.

Turkey has long signaled that an Armenian withdrawal from the occupied territories would be enough for the two countries to normalize relations. By backing Azerbaijan’s quest for more, Ankara may be missing its best opportunity in decades to make peace with its neighbor and to help heal the wounds of the Armenian Genocide. It will also forfeit the chance to balance relations with Azerbaijan’s strongman Ilham Aliyev. His deep pockets and long arms in the Turkish economy and media allow him to manipulate Turkish nationalist sentiment — at times against Turkey’s own interests, as when he torpedoed an earlier effort at Turkish-Armenian reconciliation in 2009.

Pashinyan is seeking to build on the shelved “Zurich protocols,” which assured mutual respect of existing borders. Similarly, he has said that Turkish recognition of the Armenian Genocide is not a precondition for peace. At the same time, he has agreed to set up a commission with Azerbaijan to help demarcate their common borders.

“Turkey should not leave Pashinyan in the lurch and vindicate the opposition’s claims that he is being used,” said Alin Ozinian, a Yerevan-based Turkish-Armenian analyst.

Azerbaijan’s other key demand, which is thought to be backed by Turkey, is for it to be granted access via Armenia’s sovereign territory to Nakhchivan, an Azerbaijani enclave bordering Turkey. But it wants an exclusive customs regime, which Yerevan argues would be in breach of its sovereignty.

Pashinyan has hinted at flexibility over Nagorno-Karabakh, or Artsakh as it's known in Armenian. In a bold speech to parliament on April 13, Pashinyan noted that he was under pressure from the international community and suggested that Armenia’s options were limited and no matter how bitter a pill, the country’s leaders needed to prioritize peace in the interest of its future generations. Pashinyan’s words triggered a maelstrom among his nationalist opponents, who accuse him of selling the country out.

“The protest movement, which started in Armenia after Pashinyan’s April 13 speech, proves one thing,” observed Armenian commentator Benyamin Poghosyan in a recent briefing. “The majority of the politically active part of the Armenian society does not and will not accept any solution that will make Nagorno-Karabakh part of Azerbaijan under any circumstances or guarantees. Any efforts by international actors, be it Russia, the EU, or the US, to convince the Armenian government to agree to such a solution will inevitably trigger political destabilization in Armenia,” he added.

Poghosyan told Al-Monitor separately, “President Aliyev, with his demands to sign a peace treaty with Armenia within months which recognizes Nagorno-Karabakh as part of Azerbaijan is only making the situation worse and is only bringing closer the possible formation of a more hard-line government here.”

“Turk” and “traitor” are among the slogans being chanted by the thousands of demonstrators who continue to gather in central Yerevan. Robert Kocharyan, a former president and hard-liner from Nagorno-Karabakh with close ties to the Kremlin, has taken part in the protests along with his children. To many he is emblematic of the institutional corruption and mismanagement that contributed to Armenia’s defeat.

“The demonstrators want a return to the old regime but they have yet to present any plan of their own describing how Armenia will win back lost territories or stop Turkish aggression,” Ozinian said. Like many, she does not believe that Pashinyan is under imminent threat.

The government appears to think so, too. As demonstrators clashed with police back home, Armenia’s Foreign Minister Ararat Mirzoyan was in Washington, where he signed a memorandum of understanding on nuclear cooperation with US Secretary of State Antony Blinken on May 2 and thanked the United States for its “support for Armenia-Turkey normalization.”

“In a critical moment like this for Armenia, when there is public pressure on the street calling for this government to resign, the idea that senior government figures are going off not only out of the country but to foreign countries that did not support us shows us where their marching orders come from and where their loyalties lie,” said Alison Tahmizian Meuse, an Armenian-American lecturer at the American University of Armenia in Yerevan. The foreign trips show “they are not interested in hearing what we have to say and only want to preserve themselves and their rule.”