Armenia's Nikol Pashinyan announced plans for the meeting, which may be a step towards peace with Azerbaijan. 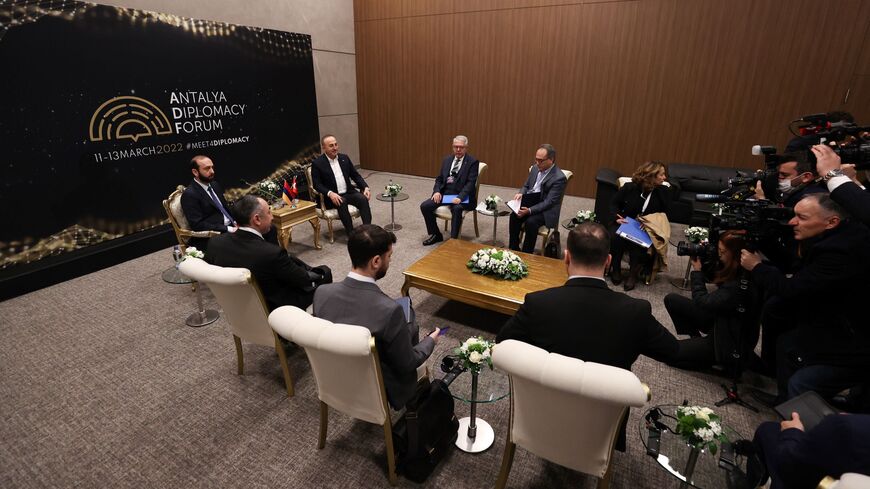 Armenia’s Prime Minister Nikol Pashinyan told the Armenian parliament today that he would be meeting Turkey’s President Recep Tayyip Erdogan on the sidelines of a European conference tomorrow in Prague.

The two leaders will be meeting in person for the first time since the two countries embarked on an effort to normalize ties after Turkey helped Azerbaijan defeat Armenia in a 44-day long war over the Nagorno-Karabakh enclave two years ago.

Armenian officials, commenting on background to Al-Monitor, hailed the event as “important” but declined to comment on the agenda. Armenia’s special envoy for Turkey engagement, Ruben Rubenyan, will be present at the talks, an official confirmed. Ankara has not commented so far.

Erdogan and Pashinyan share some common traits. Both come from humble backgrounds and are populist demagogues who are willing to take big risks. Personal chemistry matters a lot in Erdogan’s dealings with foreign leaders.

Pashinyan is also due to meet with Azerbaijan’s President Ilham Aliyev at the inaugural session of the European Political Community to resume talks on a final peace treaty to end the Nagorno-Karabakh conflict. The grouping is the brainchild of France’s Emmanuel Macron and is aimed at fostering dialogue between 27 European Union members and 17 other non-EU European states.

Armenian officials speaking not for attribution said there were no plans for Erdogan and Pashinyan to hold trilateral talks with Aliyev. However, Pashinyan and Aliyev will hold four-way talks with Macron and EU Council President Charles Michel.

Ankara and Yerevan have yet to establish diplomatic ties after Turkey became the first country to recognize Armenia’s independence from the Soviet Union in 1991. Their land borders have remained sealed since 1993, when Turkey froze access to show solidarity with Azerbaijan in the early days of the first Nagorno-Karabakh war, from which Armenia emerged victorious.

The effort to normalize ties, the second in 11 years, is bound up with Armenia’s own push to reach a comprehensive peace deal with Azerbaijan. Turkey is backing Baku’s demands that Armenia renounce all claims to Nagorno-Karabakh and allow Azerbaijan to establish a quasi-sovereign land corridor to Nakhichevan, its exclave bordering Turkey and Iran, as a prerequisite for peace.

The Armenian opposition has denounced these demands as total capitulation. However, Azerbaijan’s recent attacks on Armenia proper and its occupation of bits of Armenian territory along the border, is said to have been a tipping point.

Most commentators believe that Azerbaijan provoked the hostilities to strengthen its hand at the negotiating table. Benyamin Poghosyan, a Yerevan-based analyst, told Al-Monitor, “I believe [the latest attacks were] a warning from Azerbaijan that if no peace treaty is signed soon, maybe until the end of 2022, then the new 44-day war will start and this time directly against Armenia.”

The United States is believed to have played a facilitating role in ending last month’s violence, which killed at least 287 people, most of them Armenians. The sides are now involved in drafting a peace agreement, which Aliyev can easily ram through his own parliament. Pashinyan commands 70 seats in the 107-seat Armenian legislature.

However, the consensus is that he will need Moscow’s blessing for any deal. Distracted as it is by the war in Ukraine, Russia still holds sway over Armenia, where it has thousands of troops. Any US plan would want them out.

Yesterday, Azerbaijan freed 17 Armenian prisoners of war after US mediation.

Speaker of the House Nancy Pelosi visited Yerevan on Sept. 17, including a memorial dedicated to victims of the genocide of the Armenians by the Ottoman Turks in 1915. The visit provoked fury in Ankara and Baku alike.

The latter refers in particular to a video posted on Azerbaijani social media of people dressed in Azerbaijani uniforms executing Armenian prisoners of war. The EU is demanding a probe. Peter Stano, an EU spokesman, told reporters on Monday that the video, if proven authentic, “shows acts of war crimes and clear violation of international law.”