Erdogan has made it clear that progress in the talks is contingent on progress on Armenia’s negotiations for a peace treaty with Azerbaijan. 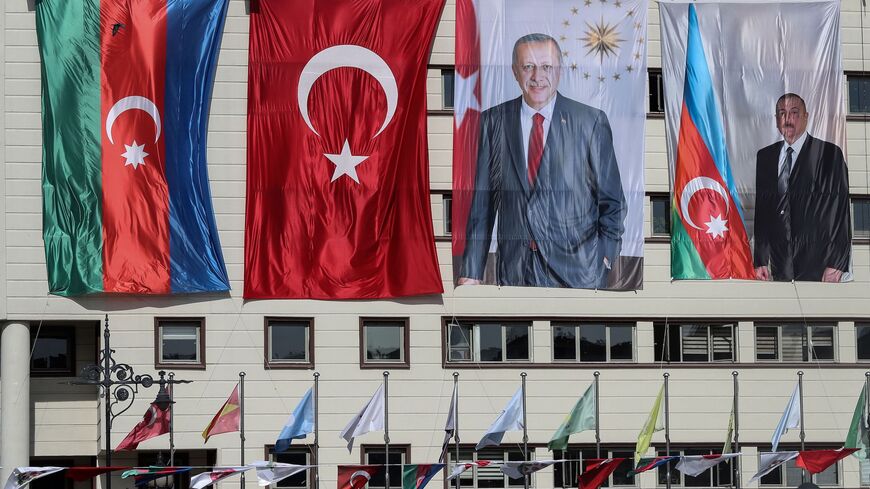 The national flags of Azerbaijan (L) and Turkey, and portraits of Turkish President Recep Tayyip Erdogan and Azerbaijani President Ilham Aliyev (R) hang side-by-side on the mayoral building in the Kecioren district of Ankara on Oct. 21, 2020. - ADEM ALTAN/AFP via Getty Images

Armenia’s Economy Minister Vahan Kerobyan announced that cargo flights from Turkey would start “in the near future,” in line with normalization efforts that resumed early this year following more than a decadelong pause. Kerobyan told a local TV channel this week that once Armenia’s land border with Turkey is opened to trade, Armenia’s economy would grow by 30% in “just two to three years.”

Kerobyan’s bullish comments follow the first substantial steps that were agreed upon during the meeting held in Vienna on July 1 between Armenia’s special envoy for normalization with Turkey Rubin Rubenyan and his Turkish counterpart Serdar Kilic. In that meeting, the parties agreed to open their long-sealed land border to third-country nationals and start the direct transportation of goods between Armenia and Turkey.

Armenia had been pressing Turkey to let diplomatic passport holders through as a first confidence-building measure, but Ankara refused. So Yerevan came up with the idea of allowing those carrying foreign passports to come through, ostensibly to promote cross-border tourism.

The stated objective of the talks launched at the start of this year is to establish full-fledged diplomatic ties and fully open the border. The frontier was shuttered by Turkey in 1993 when Armenia occupied large chunks of Azerbaijan in a bloody war over the Armenian-majority enclave of Nagorno-Karabakh that is internationally recognized as part of Azerbaijan.

For the latest news and top analysis on all things Turkey, subscribe to Amberin Zaman's weekly Turkey Briefing

In 2020, Azerbaijan wrested back all of those territories thanks to Turkey and — to some extent — Israel’s military support. A shaky Russian-brokered cease-fire is holding with Russian peacekeepers deployed along the lines of contact in Nagorno-Karabakh. However, as recently as Aug. 1, local Armenian officials accused Azerbaijan of mounting multiple attacks against the enclave. Azerbaijan denied the claim.

The 44-day-long war shook Armenia to the core and triggered a protracted bout of soul searching in a country that long prided itself on its military prowess. It also propelled the government of Armenia’s prime minister, Nikol Pashinyan, to seek peace with Turkey amid howls of protest from Armenian nationalists and diaspora communities.

On July 11, Pashinyan and Turkish President Recep Tayyip Erdogan spoke for the first time over the telephone and, according to the readouts from both sides, “expressed their expectation for the early implementation” of the July 1 agreements. Kerobyan said the opening of the border would turn “Armenia from a dead end into a crossroads,” while others spoke of “a breakthrough.”

The United States, which mediated between the sides over a decade ago, welcomed the exchange. US Secretary of State Antony Blinken told Pashinyan in a July 25 call that Washington was ready to support the process.

However, Erdogan poured cold water on Armenian expectations that same day, making clear that any further progress in the talks were contingent on progress on Armenia’s negotiations for a comprehensive peace treaty with Azerbaijan. “Azerbaijan has been our red line from the beginning. We said that we will open our doors after problems with Azerbaijan are solved,” Erdogan told Turkish state television in an interview.

The remarks fly in the face of Turkey’s claims that its talks with Armenia, launched at the start of the year, were “unconditional.” The conditions are very clear — observed Benyamin Poghosyan, a Yerevan-based analyst — that Armenia should accept all of Azerbaijan’s demands, chiefly that Nagorno-Karabakh belongs to it and not to Armenia. At most, Azerbaijan would grant some form of cultural autonomy that would result in the enclave’s majority Armenian population leaving en masse.

Turkey is also backing Azerbaijan’s demands for the establishment of a land corridor connecting Azerbaijan to Nakhichevan, an exclave carved out by the Soviets that borders Turkey.

Members of the Armenian opposition say this would effectively cut off Armenia from its border with Iran. It would also set the stage for a fresh Azerbaijani assault — with Ankara’s help — to invade Syunik, Armenia’s southernmost border that borders Iran.

Iran’s Supreme Leader Ayatollah Ali Khamenei made his objections known in a July 19 meeting with Erdogan in Tehran. “If there is an effort to block the border between Iran and Armenia, the Islamic Republic will oppose it because this border has been a communication route for thousands of years,” Khamenei said.

Turkey’s stance should not come as a surprise. Turkey said from the get-go that it would proceed in lockstep with Azerbaijan, a top regional ally that exports oil and gas to Europe via pipelines running through Turkey. As Europe seeks to reduce its dependence on Russian gas in the wake of Russia’s invasion of Ukraine, Turkey is looking to use the existing Azerbaijani line, which has spare capacity to also carry Turkmen gas. In any case, Erdogan is unlikely to make any moves that would upset Azerbaijan for fear that Baku would mobilize nationalist opinion inside Turkey against him ahead of critical presidential elections that are due to take place no later than June 18, 2023.

“The normalization process seems to be increasingly viewed as a fait accompli, even among its detractors,” said Khatchig Mouradian, a professor at Columbia University who has led more than 20 research trips to eastern Turkey over the past 15 years. “On the other hand, despite the refrain that the negotiations are progressing 'without preconditions,' the open secret that Ankara and Baku are operating in tandem to maximize concessions from Yerevan remains a concern, even among supporters of the current normalization process,” Mouradian told Al-Monitor.

All of this begs the question of why Armenia is so keenly pursuing peace with Turkey, whose combat drones were instrumental in the deaths of hundreds of Armenian soldiers. Poghosyan told Al-Monitor that it is because “Pashinyan thinks that the continuation of negotiations with Turkey, even with very little chance of success, will stabilize the situation in the south Caucasus and decrease the probability of a large-scale attack by Azerbaijan on Armenia.”

“That is why our government came forward with the idea [of opening the border to third-country nationals] to have at least [a semblance of] progress,” Poghosyan said.

The International Crisis Group noted in a recent report that “opening the border has become more urgent in face of the economic downturn that Armenia expects as Western sanctions hit Russia, to whose economy Armenia’s is deeply linked.”

Following the Russian invasion of Ukraine in February, Armenia’s Central Bank lowered economic growth forecasts from 5.3% to 1.6% for 2022, the report said. As the war grinds on, the numbers can only get worse, as will Pashinyan’s ratings. But for now, his peace initiative appears to have the public’s backing.

Rallies organized by the opposition to protest the normalization effort failed to gain traction in part because leaders of the previous regime that was bloodlessly replaced by Pashinyan in the 2018 Velvet Revolution have taken part in them. “And this gave Pashinyan the opportunity to say that these are old corrupt elites who would like to use the Nagorno-Karabakh issue to come to power and to continue their robbery,” Poghosyan explained.

Mouradian predicts that once the border is opened to third-country nationals, diaspora Armenians visiting or working in Armenia “will likely seize the opportunity to cross the border to visit the ruins of Ani or visit their ancestral towns and villages.” Mouradian was referring to the ruins of the ancient Armenian kingdom of Ani in Turkey’s eastern province of Kars bordering Armenia. “Pilgrimages to those sites — typically through Georgia — have been time-consuming and cumbersome, holding back many,” Mouradian said.