The Syrian civil war has challenged Sunni-Alawite couples in getting their families' approval for marriage and society's acceptance of their relationships. 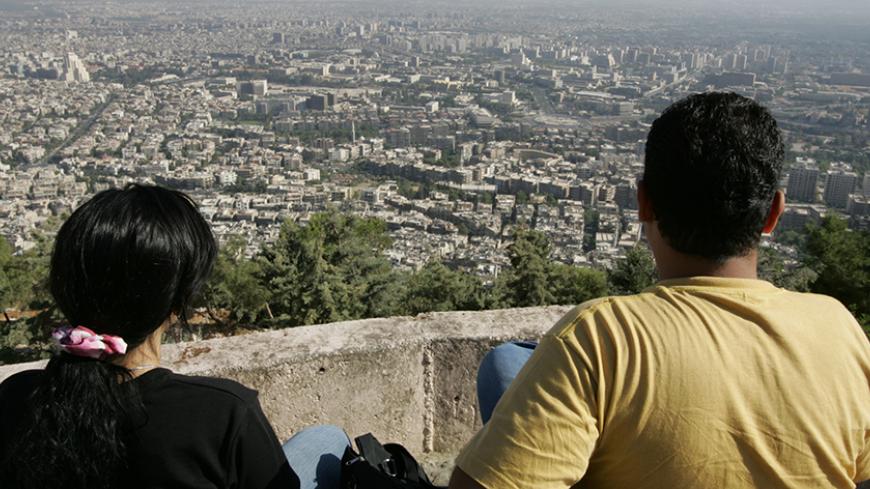 A correspondent in Damascus
January 13, 2015

DAMASCUS, Syria — Many believe that the conflict in Syria is a power struggle between Sunnis and Alawites, while others assert that the conflict is between a dictatorial regime and armed revolutionaries. In both cases, there is no doubt that sectarianism and hatred between Alawite extremists and Sunni extremists plays a major role in this conflict.

Still, there are young men and women from different communities who continue to challenge this paradigm through love, determination and marriage. Damascus, despite the war, is still able to witness such love stories in these difficult days.

“I come from a Sunni family from the city of Homs, and when I was in college I met a young Alawite man from Homs, and we have lived a long and beautiful love story that the war almost put an end to. I had to leave Homs with my family after an artillery shell destroyed our house, and the man I love fled the country to escape conscription, but we are determined to defend our relationship and ultimately marry,” a 27-year-old woman, who holds a B.A. from Homs University, told Al-Monitor on condition of anonymity.

The woman lives with her family in a small house in a Damascus suburb after they lost their property in Homs. Her father said he initially was fine with the marriage, but growing pressure from relatives was adding strain to the relationship. “I know that my daughter is in love with an Alawite, and this was unacceptable for many, even before the outbreak of the revolution in Syria, but I was ready to defend her and facilitate her marriage to him. However, after the outbreak of the revolution, my relatives became more sectarian and intransigent. They say that Alawites are the ones who displaced us from Homs, and I think they will be quite angry if I agree on marrying her off to him,” her father told Al-Monitor.

The woman said her fiance’s family were also opposed to the marriage for sectarian reasons. “My fiance’s family is completely against this marriage. They tell him that all Sunnis in Homs are criminals and that they will wash their hands of him if he marries me. Under such circumstances, there is no way that my family will accept and defend this marriage,” she said, adding her fiance is currently working in Turkey, and she intends to follow him and marry him there. “We will come back in the future to Syria with our children, and we will tell everyone that our love was stronger than their struggles.”

In a small basement in a poor suburb of Damascus, a 32-year-old man lives with his wife in harsh conditions. The damp smell is inescapable, the basement is cold and dark due to the lack of heating and the long power cuts. Yet, the couple do not look miserable, but rather they seem determined to carry on.

The young man spoke to Al-Monitor on condition that both he and his wife remain anonymous. “I am a young man from a Sunni-Damascene family, and when my father found out that I intended to marry a Alawite woman, he went ballistic and kicked me out of the house,” he said. “He said Alawites are occupying Damascus and that it is not right to marry their daughters. However, I was determined to defend my love, and I married the Alawite girl whom I love without any help from my rich family. And here we are, struggling for life.”

The wife looks confident in her ability to cope with the difficulties of life with her husband, “Just like my husband’s family, my family abandoned me. My marriage has caused major problems in the family, but one of my brothers supported my decision, while the other brother threatened to kill me. They eventually let me marry and leave the house safely, but asked [me] to never return. I cry a lot whenever I remember my mom and dad, but I am confident that I made the right decision and that they will forgive me and embrace me as soon as they come to find out that sectarianism is not the right choice.”

Her husband said both he and his wife are neutral in this war, supporting neither side, and determined to combat extremism and sectarianism through the example of their marriage, “Neither my wife nor I support the Assad regime’s dictatorship, but neither do we support the militants fighting this regime. We are confident that the future will be in our favor and in the favor of our fellow nonextremists.”

Damascus, which is full of stories of prisoners and suffering of their families, also has similar stories of love. But the difficulties for cross-sect couples in seeking marriage do not only stem from objecting families, but also from customs that permeate through the Syrian system. Judges in Syria refuse to marry off women without the consent of their parents.

One such case is a 32-year-old man who hails from the predominantly Sunni region of Hama. “I have been in love with an Alawite woman for seven years now, and her family is completely against me marrying her. When we went to the forensic judge's office in the Palace of Justice in Damascus, the judge refused to marry us without notifying her father for approval. The only choice we have left now is to flee the country and get married in a foreign country, and this is what we will eventually do because we will not allow them to destroy our love,” he told Al-Monitor.

Not all love stories are this painful and complicated, and not all Syrians have succumbed to sectarianism. We met an Alawite engineer who was proud that his daughter fell in love and married a Sunni man from Damascus. The elderly man seemed brave and confident when he told Al-Monitor, “I fully supported the marriage of my daughter, and she lives with her husband now despite all the pressure that we've had from our relatives and social surroundings. The love story of my daughter and her husband is just a usual love story, but it has acquired an additional value under the current circumstances and we are against blind hatred.”

In Damascus, which is reeling under the brunt of a grinding war raging in its surroundings, there are still many Syrians who do not adhere to the script of sectarianism and hate that war imposes. Mixed-sect marriages are not only an expression of profound love in the face of hostility, but a tool in itself against the rhetoric of hate.