Two mixed Jewish-Muslim couples, one residing in Jaffa and another in Umm al-Fahm, talk to Al-Monitor about how the current unrest is complicating their already cautious lives. 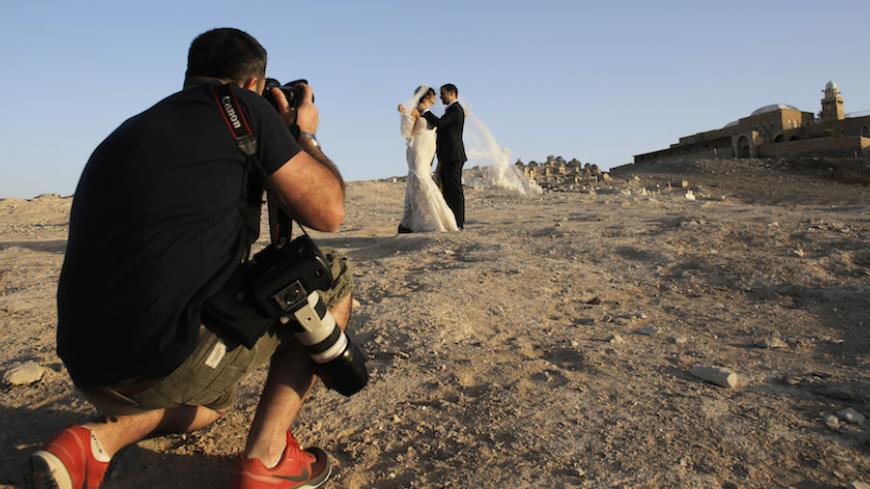 An Israeli couple poses for their wedding photographer as graves and a mosque (R) are seen in the background at Nabi Musa in the Judean desert near the West Bank city of Jericho, Nov. 28, 2013. - REUTERS/Ammar Awad

It was a real challenge to find people who agreed to be interviewed for this piece. While there are quite a few mixed couples in Israel, with one partner Jewish and the other Muslim, many of them are afraid to provide a glimpse into their fascinating lives. Now especially, when the street is becoming a jungle and hatred is bubbling over and blinding so many people from both religions, these families prefer to seclude themselves until the rage passes.

“Right now, everybody is afraid. It’s not something you can hide,” Alaa Agbariyah tells Al-Monitor. He and his wife Hagar have a young daughter. While many mixed families lived in mixed cities, Alaa and Hagar live in the Arab town of Umm al-Fahm. “I work together with Jews. I’m not afraid that anything will happen there,” he says, “but on my way to work, on the bus, anything can happen. I’m worried about someone getting hurt near me. Ever since this all began, I’ve preferred to drive to work with friends instead of taking the bus.”

He says that the current wave of violence has had no impact on his relationship with Jewish friends and colleagues at work. Still, people are afraid to visit him at home, and he understands why. “There were several cases of rocks being thrown here, so I won't say, ‘Come visit Umm al-Fahm now.’ That would be presumptuous of me. Still, I think that things will calm down soon,” Agbariyah explains.

Tamar lives with her husband Yusuf (not their real names) and their three children in the mixed city of Jaffa. She is also concerned about the situation, though she isn’t particularly worried about an Arab attack. She said that Jews from the West Bank settlement of Bat Ayin moved into her neighborhood a few years ago. When the current wave of violence began, she says, they took part in the local riots. “Jews, Arabs and border police were involved in those riots,” she tells Al-Monitor. “We heard everything. If there’s anything I am afraid of, it’s them. I lock my door now, which is something I haven’t done in a very long time. I’ve been living here for 10 years and I know lots of people, but I still feel more vulnerable now. It’s an unpleasant feeling.''

Tamar and Yusuf both try to ensure that what happens outside their home stays outside their home. “We have no television at home, because some of the information is distorted,” says Tamar. “I take extra precautions to ensure that our children aren’t overly exposed to stories about what is happening. Whenever my husband and I talk worriedly about what might lie in store, we make sure not to do it near the kids. On the other hand, my son does go to school, and I’m sure he hears a lot there, despite all my efforts to protect him.”

As a Jew who married a Muslim man and now lives within an Arab community, Tamar says that she feels “a strong sense of identification with the Palestinian side.” She points out that their children still haven’t asked about their parents’ inter-religious relationship.

Alaa and Hagar also try to shield their daughter from what is happening. “We understand the situation and have almost the same opinions,” says Agbariyah, a veteran political activist aligned with the Arab Hadash Party. “The situation is present in our lives, but it is an overall feeling we have, not something that can impact our relationship as a couple.”

They say they are both news addicts. “I watch channels from both sides, while Tamar mostly watches the Hebrew channels,” Agbariyah explains. “She gets the rest of the story from me. Obviously, we argue sometimes. I’d start to worry if we didn’t have any arguments. We argue about everything. It’s not like we argue about what’s right. We both have the same goal. What happens is that in some cases, during some incidents, one of us sees things a little differently. On the other hand, there are other incidents where we both feel the same way.

“We get angry about every attack,” he adds. “I was furious at the person from Umm al-Fahm who committed the attack in Gan Shmuel. We agreed that the security forces could have responded differently in the case of the female student from Nazareth" who security forces shot while she stood holding a knife. Many people have questions about her intentions to attack Jews, and there is reason to believe that she was trying to commit suicide.

As far as these two couples are concerned, there is nothing unusual about their love. “I’m not fulfilling some vision of coexistence or anything ideological like that,” Agbariyah says decisively. “I met a woman 12 years ago, fell in love with her and married her. Don’t put the whole conflict on us.”

Agbariyah admits that their relationship is challenging, but he thinks that they have a better chance of making it work than a “normal” couple. Maybe it’s because of all the obstacles that couples like them struggle to overcome from the very beginning. “My family responded like her family at first,” he says. “There were strange looks. There were problems. They even shunned us, but that’s all past us now.”

The beginning wasn’t easy for Tamar and Yusuf, either. Actually, for most of their relationship, important members of Tamar’s family had a hard time accepting the man she chose to share her life with. There were also people in Yusuf’s family who also opposed the mixed marriage. “My family underwent a process,” Tamar says. “They now accept my choice, and they accept my husband too.”

She concludes, “Each such wave of violence tells us, yet again, that Israel is not a place to live in. We don’t think it’s over yet. In fact, we think that it will get worse. There is so much war and hate and evil here. We are people of peace. We are people of faith. We have one god, and we each worship him and love him in our own way. We celebrate all the holidays. We love to read all the prayers in all the different languages.”

In the blood-drenched reality that we are all facing, it is encouraging to find oases of sanity and love in its simplest form, where hatred cannot penetrate to sow discord. At the same time, however, choosing to be part of a mixed couple makes the surrounding reality inescapable. It is always there, even at home.