After a 36-hour silence following the storming of Roumieh prison, the Arsal terrorists holding Lebanese soldiers resumed contact with the government's mediator. 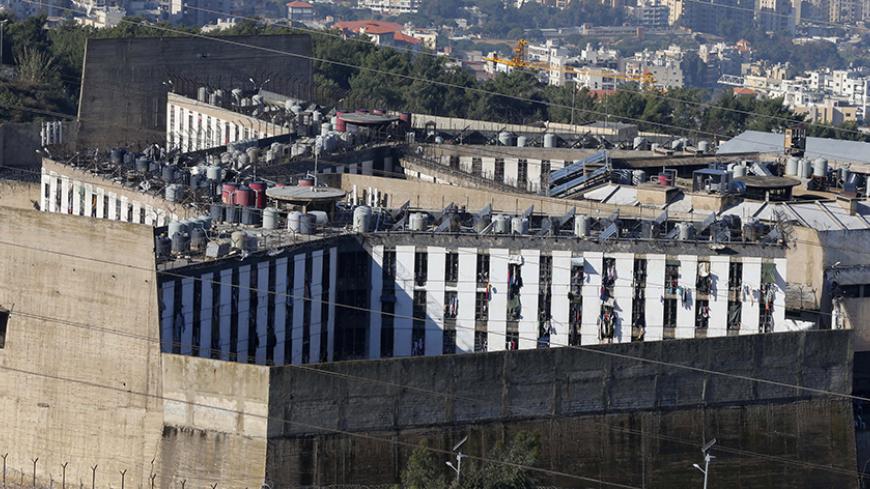 A general view shows Roumieh prison, Lebanon's largest prison and a detention center for Islamist militants, which was stormed by Lebanese forces on Monday as they searched for those responsible for a double suicide attack, Jan. 12, 2014. - REUTERS/Mohamed Azakir

Al-Monitor witnessed, by sheer coincidence, a phone call between a Lebanese government official and the mediator in contact with terrorist groups in the rugged mountains of Arsal, at the northeastern Lebanese border.

The call was made in the case of Lebanese soldiers who were kidnapped on Aug. 2, 2014. This call came 36 hours after Lebanese Internal Security Forces stormed the Roumieh central prison near Beirut on Jan. 12, to regain control of the cells of the arrested Islamist extremists and separate them from one other.

The operation was carried out after the Lebanese authorities discovered potential connections between those arrested and the suicide bombers who carried out the double attack in the northern Lebanese city of Tripoli on Jan. 10.

The Lebanese official told Al-Monitor, on condition of anonymity, that he and the mediator had not heard from the armed groups since the storming of the prison. The silence was worrying and there was news that they threatened to use the kidnapped soldiers to avenge the prison operation.

While the official was talking to Al-Monitor, his cellphone rang. He immediately stopped talking and his expression became serious; then his eyes slightly lit up. “It is the mediator,” he said. He looked anxious before answering the call, because there had been no contact with the militants and there was conflicting information about the situation. The call was either to inform the official of the return to negotiations between the Lebanese government and the terrorists, or to announce the name of the latest victim whom the terrorists had decided to kill in retaliation.

Since the kidnapping of the Lebanese soldiers last August, the terrorists had killed four of them: Ali al-Sayyed on Aug. 29, Abbas Mudlij on Sept. 7, Mohammad Hamiyeh on Sept. 19 and Ali al-Bazal on Dec. 5.

For its part, Jabhat al-Nusra on Aug. 31 released five other prisoners, thus making 25 the number of soldiers detained by the two groups.

The Lebanese official answered the call and listened to what the mediator had to say. He asked brief questions, while the mediator, known as Abu Ahmad, gave long answers. When the call had come to an end, the official took a deep breath expressing relative satisfaction and said that fortunately there was no bad news and no one had been killed, though the negotiations were still suspended.

The government official put down his cellphone and continued talking to Al-Monitor. He said that two Lebanese mediators were facilitating negotiations between the government and the insurgents. The role of the Qatari mediator, Ahmed al-Khatib, who had previously been handling the negotiations, ended after Doha announced that it halted its mediation in this case.

On the opposite side, there are also two parties: Jabhat al-Nusra, represented in the rugged mountains by its leader Abu Malek al-Talli, and the Islamic State (IS), which was until recently represented by its leader known as Abdul Salam. However, Salam was summoned to Syria to fulfill other duties, the same official learned from the two Lebanese mediators. Subsequently, the contact channels with IS were suspended in anticipation of a new leader being identified.

Asked how the contact channels with the militants had been established, the official said, “The most important shift was when we discovered that there was an Islamist detainee in Roumieh prison who is a remarkable doctrinal reference for insurgents. His initials are N.J. and his name has always been present on the lists of prisoners that the gunmen asked to be released. N.J. follows the religious doctrine of 'the reality-based fiqh,' a fundamentalist religious diligence that allows adaptation with thematic data. This doctrine authorizes reconciling dogmatic fundamentalist beliefs with practical conditions. Thus, the man was open to dialogue and was ready to persuade the other militants. Subsequently, several sources confirmed to us that the man has a relative influence on the militants.

“We checked his legal status, and we found out that he was still under investigation, that no judicial verdict had been issued against him and that he was not detained on criminal charges. We established a series of contacts with the involved government and judicial agencies, and we managed to release him. The man is Lebanese, and he hails from a village in the Bekaa Valley close to areas where insurgents are present. Thus, the released 'sheikh' returned home and started helping us contact militants and negotiate with them. However, the first condition for the negotiation process was to end the liquidation of prisoners.”

The liquidation of soldiers stopped more than a month ago, but the threat that these killings would happen again resumed after the recent Roumieh prison operation. Yet, the government official seemed more reassured after his call with the mediator. He said that general foundations had been laid for the negotiations and that many details were being discussed, but most importantly, that the gunmen had started moving toward other non-Lebanese priorities. Time will tell what these foundations and emerging priorities of the terrorists are.