The escalation on Israel's northern border should have driven Israeli politicians to explain their specific security approaches, but most of them chose to repeat the usual deterrence slogans, without any reference to other diplomatic options. 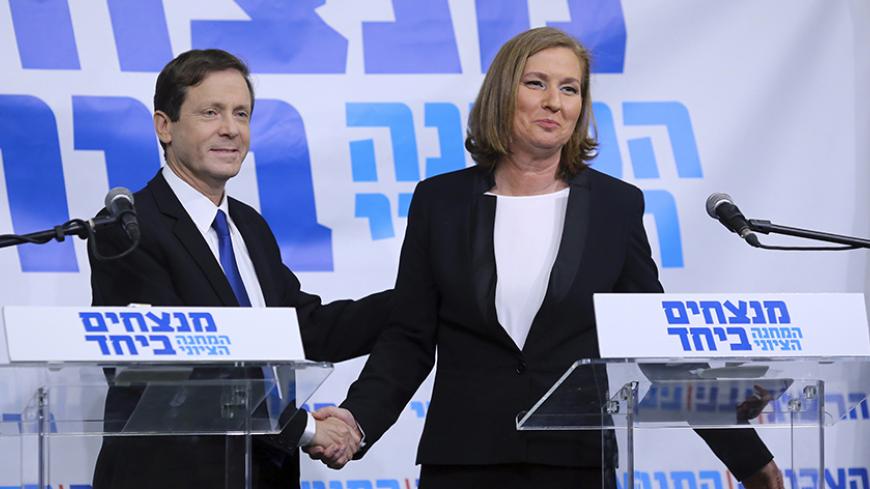 Just one day after Hezbollah’s deadly attack on an Israel Defense Forces patrol on Mount Dov, Tzipi Livni, the No. 2 candidate for the Zionist Camp list, appeared on Israeli news site Ynet studios and with a stern face told viewers that Prime Minister Benjamin Netanyahu had harmed Israel’s power of deterrence. She went on to claim that his poor relations with the Barack Obama administration is costing Israel in terms of security.

This is, of course, a legitimate and justifiable position, even for someone who sat, until just two months ago, in the Security Cabinet of that same Netanyahu. Now, however, Livni is in the No. 2 slot in a rival party that seeks to run the country. It is therefore only fitting that she would publicly hone the security worldview differences between the Zionist Camp and Likud. Instead of doing that, however, she fell back on the same easy rhetoric that she used against Netanyahu from 2008 to 2013, when she was chair of the Kadima Party, the opposition, and later of the Hatnua Party. In this rhetoric, Netanyahu is presented as posing a danger to the security of Israel. Livni is a good campaigner, a credible and intelligent interview subject and an experienced politician. In the past few weeks, she has even been mentioned as a seemly candidate for defense minister. That is why anyone who expected to listen to this interview and learn what makes the security position held by her and her colleagues in the Zionist Camp any different from that of Netanyahu, or of current Defense Minister Moshe Ya’alon, would walk away feeling disappointed. With all due respect, personal attacks do not make up a worldview.

In that interview, Livni described how she joined co-leader of the Zionist Camp Isaac Herzog and Maj. Gen. Amos Yadlin on a visit to the Golan Heights on the morning of the incident, “to send a message to the other side that they should not even think that they can cause a rift between us. When it comes to Israel’s security and Islamist terror, we will respond harshly.” It was a militant message, intended to emphasize that the leadership of the Zionist Camp realizes that Israel is not Switzerland. It was intended as a wink to the center-right, which may have been influenced by efforts from both Netanyahu and Naftali Bennett to brand the Zionist Camp as far left.

It is quite possible that Livni’s approach to security issues is different from Netanyahu's. After all, she was part of the country’s diplomatic and security leadership during the Second Lebanon War (2006), Operation Cast Lead (2008-09) and Operation Protective Edge (2014). But rather than presenting her approach, she went back to claiming that she and Herzog know how to win international support for Israel, unlike Netanyahu.

In the past two days, Livni and Herzog were not the only ones guilty of engaging in a shallow discussion with more than a whiff of electioneering about it. Almost all of the speakers, led by the prime minister, of course, and senior members of the Likud and even Yesh Atid Chairman Yair Lapid, made no effort to explain to the people what is special about each of their security approaches.

Netanyahu offered the same dog and pony show that he usually gives in such a situation. After conducting a situation assessment meeting at the Defense Ministry in Tel Aviv, he said, “Whoever is behind today’s attack will pay the full price. For some time, Iran — via Hezbollah — has been trying to establish an additional terrorist front against us from the Golan Heights. We are taking strong and responsible action against this attempt. The Lebanese government and the [Bashar] al-Assad regime share responsibility for the consequences of the attacks emanating from their territories against the State of Israel.”

The next day, Netanyahu accused Iran of being behind the attack. This was the same rhetoric he offered in the two weeks leading up to Operation Protective Edge. Everyone remembers how he was eventually dragged into a campaign against Hamas, how that campaign ended, and most of all, what didn’t happen diplomatically in its wake. At the time, Netanyahu spoke about a new diplomatic horizon based on a coalition with moderate Arab states, but all those statements were left hanging in the air.

And what has happened to Lapid in the meantime? While he may not be an old hand in politics like Livni, he took a crash course over the past two years and was one of the decision-makers during Operation Protective Edge. Does he think it is necessary to respond differently to Hezbollah? And how is his approach to security issues different from that of Netanyahu? Given his response to the events of this week, there is no difference between the two approaches. In fact, it looks like he would prefer not to veer from his campaign against corruption. In his statement, Lapid said, "Israel will not tolerate attacks by terrorists on its territory, its soldiers and its civilians. Hezbollah cannot hide behind the argument that Israel started it. They started the previous round, they started this round and they should know that Israel knows how to respond with full-force to attacks like these.”

Lapid may actually be signaling to right-wing voters even more than the Zionist Camp. Now, with security issues escalating, the public traditionally shifts to the right. Lapid is simply aligning himself with that narrative. Much like Livni, Herzog and now Yadlin from the center-left, Lapid also appeared before the press clenching a knife between his teeth. Even so, that was hardly enough to hone his diplomatic worldview for public consumption.

Livni and Herzog could have taken advantage of this opportunity to present some other alternative to the direct negotiations with Palestinian President Mahmoud Abbas, which have failed. At a moment like this in particular, Israeli citizens deserved to hear meaningful arguments that would have underscored the differences between the party leaders. Yet, even after it has been accused of being aligned with the extreme left, when the Zionist Camp wants to emphasize its uncompromising approach to security in response to the Hezbollah attack, any real differences between them and the other parties are barely emphasized at all. And this is seemingly on purpose. Livni's declaration that “Netanyahu doesn’t know how to talk to the US” is hardly a point of distinction.

Even those seeking a more in-depth debate in parties to the right of the Likud were likely to find themselves disappointed. The Chairman of HaBayit HaYehudi Naftali Bennett, who normally tweets or updates his Facebook status several times a day, suddenly went silent and vanished from the dialogue. It looks like in his case, the reason is that he did not want to sound too belligerent, particularly at a time when he is trying to show that his party is not the unhinged far right.

As for Foreign Minister Avigdor Liberman, who is currently fighting for his party’s future, with ominous polls looming in the background, it seems as if there is nothing new under the sun. Before the corruption scandal in Yisrael Beitenu was revealed, he had been showing signs of moving to the center and even presented a moderate diplomatic program. He has since put that aside and called for a disproportionate response instead. In his case, too, the public was left confused. Rather than receiving any thought-provoking arguments, it was treated to a bevy of campaign slogans intended to win back the support of the right.

Ever since the 2011 social protests, Israelis, and especially young Israelis, have become more involved in the way the country is run. While this is certainly true about economic and social issues, the trend will surely start trickling toward security issues as well. That is why, two months before the elections, candidates claiming to lead the various parties should present detailed positions and platforms on security issues, too.