Why US, EU should intervene in Israeli elections

The United States and European Union should explain to Israeli voters what is at stake at the international level in the March elections. 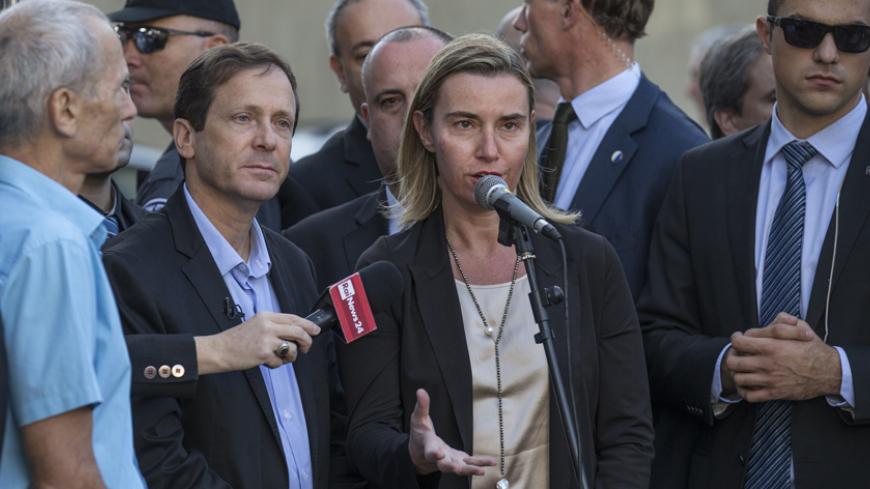 High Representative of the European Union (EU) for Foreign Affairs and Security Policy Federica Mogherini (C) gives a speech during a visit at the memorial site where the late Israeli Prime Minister Yitzhak Rabin was assassinated in November 1995, in Tel Aviv, Nov. 7, 2014. - JACK GUEZ/AFP/Getty Images

"Carrots, Sticks and EU-Israel Relations." This is the title of a conference to be held at the Hebrew University in Jerusalem at the end of January. The head of the European Union delegation to Israel, Lars Faaborg-Andersen, appears among the list of speakers. Despite the expectations of the organizers, it is doubtful whether his speech on this topic, less than two months before the March 17 elections in Israel, will make sensational headlines.

One of the conference organizers, who asked to remain anonymous, told Al-Monitor, "Today you won't find one ambassador who would speak out notably on this topic." The EU delegation in Israel said in response to Al-Monitor's inquiry, "The European Union does not intervene in electoral processes in third countries, including Israel."

Federica Mogherini, the EU's high representative for foreign affairs and security policy, has, however, criticized the Israeli government's decision to freeze the transfer of tax revenue to the Palestinian Authority (PA) following the petition of Palestinian leader Mahmoud Abbas to join the International Criminal Court at The Hague. She made sure, however, to balance her statement, noting that "recent steps taken by Palestinians and Israelis could aggravate the already tense situation on the ground and bring them further away from a negotiated solution."

​Behind closed doors, European ambassadors serving in Israel have expressed great frustration at the dead end that the contacts between Israel and the PA have reached, but their capitals have instructed them not to wield the "sticks" that are planned if the present situation continues after the election or dangle the "carrots" that will be offered to encourage a breakthrough. All this stems from fear of appearing to intervene in the electoral process, or more gravely, from fear that they could tip the scales toward those who oppose talks with the Palestinians.

France expressed the great frustration felt in Paris in light of the dead end the peace process has reached when it decided to support the Palestinian petition to the UN Security Council calling for an end to the occupation. After vocal protest by Israel, France quickly admonished the Palestinian leaders for turning to the International Criminal Court at The Hague following their failure at the Security Council. Foreign Minister Laurent Fabius expressed "wonder at the logic in this step."

In a speech to US envoys to Europe on Dec. 19, US Secretary of State John Kerry said that Washington would not allow the Security Council to reach a decision on the peace process in the Middle East before the Israeli elections. He explained that such a decision would strengthen the extremists who oppose the diplomatic process.

Uri Savir reported Jan. 4 in Al-Monitor on a consensus among Western powers to put the demands to the Israeli government concerning the future of the settlements, but noted that they would only be raised after the election! Even if these demands are accompanied by carrots and sticks, as will be discussed at the Hebrew University conference, for the time being no one is presenting them to the Israeli voter. Socioeconomic matters and the "cost of living" are the issues that most trouble Israelis these days. Various polls show a vast majority stating that the economy is the top priority in the election. The peace process has ranked third, dozens of percentage points below the economy.

Few of the politicians campaigning in Israel are pointing out to the voter the connection between the continuation of the occupation and their economic situation. Those who do so often keep it vague because they too have seen the polls.

Prime Minister Benjamin Netanyahu, the Likud's candidate for his current job, repeatedly emphasizes that the State of Israel is the only Western democracy in the Middle East. "An island of democracy in a stormy sea," he said some time ago at the residence of the US ambassador here. But Israel is also the only democracy that occupies another people, that is responsible for the lives of about 4.5 million Palestinians who lack any rights (2.7 million in the West Bank and 1.8 million in the Gaza Strip). The State of Israel forces its allies in the free world to confront colonialist values that they themselves rejected and abandoned long ago.

A legal professional who is a high-ranking official close to Netanyahu has told me in the past that his colleagues in European governments emphasize that the criticism they put to Israel is backed by the understanding that it is a democratic state. Unlike Syria, Iran, Eritrea or Yemen, the State of Israel is considered part of the family of civilized countries, and thus subject to moral standards and international laws. This is how they relate to it, and since this is so, Western nations find it difficult to accept Israel's devotion to the occupation and the discrimination stemming from it.

If one listens to what diplomats and statesmen are saying behind closed doors, the coming election will be critical. More than determining the composition of the next government, it will determine the place of the State of Israel in the family of nations. Patience is running out, and there are those who speak of a "price tag," "sticks" and, more bluntly, economic sanctions. Few in Israel are aware that such steps would further worsen the economic situation and the socioeconomic issues currently at the top of the public agenda.

The distinction that the Israeli voter makes between the two issues is mistaken and misleading. It should be clarified now rather than ignored until after the election. The possibilities before the voter should be presented now. The carrots and the sticks. The support German Chancellor Angela Merkel provided former French President Nicolas Sarkozy in the 2012 elections and, on the other hand, the German Social Democratic Party's support of French President Francois Hollande are indeed exceptional. It is not common for foreign governments to intervene in electoral processes, even among friendly nations, but this time is different.

If Washington, London, Paris, Berlin or Brussels are considering packages of threatening sticks or enticing carrots, these should be presented now. Since Israel faces a crossroads, the voters must be given all the information available. Israelis, who so excel at technological advances, startups and exits (selling startups to high-tech giants), will know how to handle the facts and how to weigh the possibilities before them. It is the duty of Israel's primary allies — the United States and Europe — to present voters in Israel the full array of consequences before they cast their ballots, as abstaining from interference can also sometimes be outright interference.