Decentralization of powers weakens IS

The Islamic State leader, Abu Bakr al-Baghdadi, is forced to limit his movements while relying on primitive means of communication, which weakens the organization. 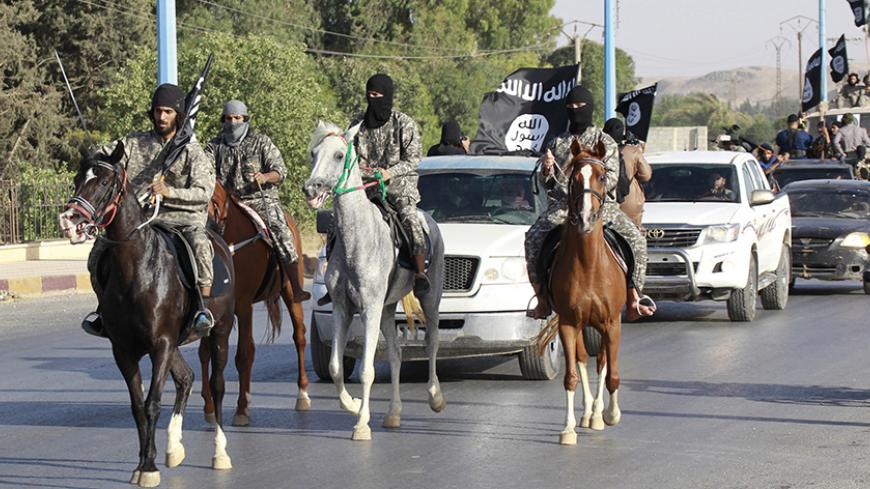 Militant fighters of the Islamic State on horseback take part in a military parade on the streets of Syria's northern Raqqa province, June 30, 2014. - REUTERS

Just like any Middle Eastern leader, Islamic State (IS) leader Abu Bakr al-Baghdadi (Ibrahim al-Badri) relies upon his relatives to guarantee his own security. However, ever since his spectacular appearance in the Mosul mosque in July, he has been missing a great deal of freedom of movement, which has prompted him to resort to traditional ways to camouflage his whereabouts. Meanwhile, the new generation of leaders in contact with him remains anonymous after leaders close to him were killed during recent months.

A researcher in the field of armed groups, Hashem al-Hashemi, spoke to Al-Monitor about leaders currently surrounding Baghdadi. Chief among these is Abu Bakr al-Khatuna, who hails from Zammar in Mosul, and Hashemi — who published a few weeks ago a book titled “The IS World” — knows that he is one of the most prominent leaders that Baghdadi counts on, being his personal friend. Noman al-Zaidi, according to Hashemi, is another friend of Baghdadi who was killed in Anbar in 2011.

“Baghdadi’s council was made up of 18 leaders, most of whom were killed in 2014, most notably Abu Abdul Rahman Albiloa, Abu Ahmed al-Alwani, Abu Muhannad al-Suedawi, Abu Muslim al-Turkmani and his security minister Abu Musa Al-Shawakh,” Hashemi said.

According to information obtained by Al-Monitor from sources in Mosul, Baghdadi’s movements are surrounded by a great deal of vagueness. After his appearance in Mosul, he never made any other public appearance, and IS associates did not mention any meetings held in his presence, nor have they informed of any visit he made to a certain place.

According to these sources, the same applies to the Syrian city of Raqqa, where some areas were targeted by the international coalition.

According to multiple sources, and Hashemi believes this is more reasonable, Baghdadi is moving about a series of villages scattered on the Syrian-Iraqi border line, where he can safely reach the Syrian interior, Mosul and the Anbar desert without being tracked down.

In November, there were reports according to which Baghdadi was killed or wounded in a US airstrike against a gathering of tribal leaders that convened to swear allegiance to IS in the border town of Qaim, which IS annexed to the Syrian town of Abu Kamal. The two towns were named the “Euphrates Wilaya.”

However, the news was not true and it was denied the following day. What is true, however, is that the information that evoked the airstrike indicated the movement of multiple convoys of armored cars and military tankers loaded with weapons from various areas in the desert of Mosul, where Baghdadi is suspected to reside. This was coupled with mobile phone cuts, which were also cut during Baghdadi’s sermon in Mosul in July 2014.

According to some sources, the security team surrounding Baghdadi is planning on making things more complicated and resorting to further camouflage to cover his movements. Moreover, Baghdadi does not circulate with large convoys; he is only accompanied by two of his most loyal associates, who, according to Hashemi, are Abu Talha al-Libi and Abu Miqdad al-Yemeni. “The organization of the movement and the accompanying communications and changing plans are of the responsibility of Baghdadi's brother, whose name is likely to be Jumaa Awad al-Badri,” a source said.

Baghdadi’s loss of a group of the most important leaders and the restriction of his scope of movement are two factors that forced him to rely on the figures who are not known to be in the leadership of the organization. Baghdadi was forced to delegate many of his powers to IS field commanders. This has given rise to differences within the organization. According to sources close to him, these differences will set the stage for internal cracks in the organization.

The decision-making decentralization in IS is not new. It is part of the nature of the organization, especially during its secretive work and its adoption of the landline communication between its members and leaders. However, the situation has changed, as IS has managed to occupy large areas and key cities such as Mosul, Tikrit, Fallujah, Qaim and hundreds of surrounding villages. This expansion requires a different management system and a clear relationship at the level of responsibilities, not only in terms of battle leadership but also in terms of the civilian life management in those towns and villages.

Witnesses from Mosul said to Al-Monitor that the management efficiency of the IS leaders varies from one neighborhood to another, as all the leaders are now somehow directly responsible for the areas they administer. Each and every leader in IS is now in charge of the affairs of the area under their control and it is they who have to solve their problems and distribute the spoils of war away from the organization’s leadership.

The conflict of powers in IS is over three aspects:

IS' ability to impose its current influence in areas it settled in is mainly related to the risk it is exposed to both inside and outside these cities. This risk often justifies the quelling of conflicts and disputes in favor of military mobilization.

The limited scope of Baghdadi’s movement forced him to increasingly rely on primitive methods of communication and delivery of letters, such as conveying oral messages or using complex codes for the exchange of electronic and phone messages knowing that these are changed weekly. This constantly weakens IS’ ability to directly lead the organization.

This has emerged in an attempt on the part of IS to attract more people with technological skills to develop communication capabilities without IS’ network being monitored. Although IS took in skilled people to prevent breaches through communication within the organization, these efforts did not succeed; meanwhile, the international coalition succeeded in striking severe blows to the organization.