The Islamic State has imposed strict conditions for books entering Iraq by land, confiscating all those related to Christianity and slowly destroying cultural pluralism in Iraqi society. 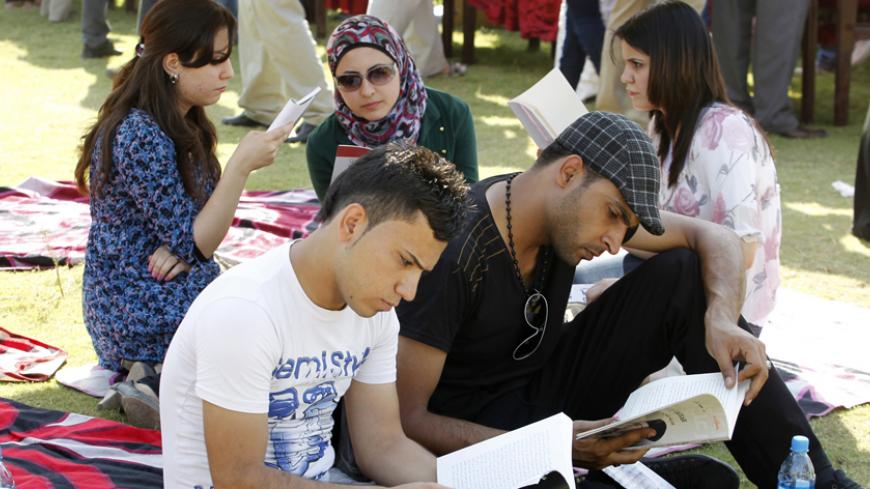 People read books at the start of a reading initiative in Baghdad, Sept. 29, 2012. - REUTERS/Thaier al-Sudani

NAJAF, Iraq — For decades, the overland route between western Iraq and Lebanon has been the busiest and most important passage for the transportation of books and publications to Iraq. Today, the route has fallen under control of the Islamic State (IS), with fighters censoring book shipments to prevent the entry of material and information they consider to be contrary to Islam. Given that the transportation of books by air and sea is much more costly, IS’ control over land routes will affect the market for and distribution of cultural products in Iraq.

Fighters usually inspect cargo, impose custom duties and confiscate any publication deemed contrary to their principles. The offending books are burned or otherwise destroyed on the spot. Moreover, the vehicle drivers face serious consequences. In many cases, they are only released after their relatives or the publishing houses they work for agree to pay large sums of money as ransom.

At one point, publishing houses began resorting to trickery to distribute their products, placing potentially sensitive books under copies of the Quran. This led some fighters to believe that entire loads consisted of the Islamic holy book, so they would allow the cargo to pass on to Baghdad and other southern cities. IS members eventually recognized what was happening and tightened inspection procedures and supervision.

Al-Monitor learned from the Beirut publishing house Dar al-Rafidain that in early December 2013, IS had confiscated one of its latest publications, “Christians in Iraq: Comprehensive History and Current Challenges.” The volume is an encyclopaedia of some 900 pages on the historical roots, cultural presence and social heritage of Christians in Iraq. IS fighters detained the driver and only released him after obtaining a $5,000 ransom from the shipping company.

In an interview with Al-Monitor, Mohammed Dujaili, director of Dar al-Rafidain, asked, “Haven’t Christians suffered enough killing and displacement? I do not know what scares terrorists about this book! Maybe they are destroying this book, which documents the deep Christian roots in this country, to complement the brutality of their terrorist acts? I feel sorry for my fellow Christians in Iraq.” He also said that IS had confiscated a large number of other books, costing his company close to $80,000.

This censorship of publications falls within the scope of IS' general goal of “purifying” Earth of all that differs from their Salafist version of Islam, including humans who do not believe as they do, religions, architecture and educational curricula. In December, the German journalist Juergen Todenhoefer spoke to CNN about his visit to IS-controlled territories. He interviewed a number of fighters, including one who claimed that the organization was preparing the largest religious cleansing campaign the world has ever seen.

The IS project is being carried out not only at the territorial level, but also at a temporal level. IS seeks even to cleanse history of the of Christians, Yazidis, Shiites and all other non-Salafists. Thus, the group's censorship of publications not only includes those involving non-Salafist religious concepts or opposing Salafism, but also those covering cultural history and religious diversity in the areas under its control. IS believes these publications potentially consecrate the historical right of non-Salafist minorities to their lands in Iraq.

The Salafists' extremist classification of people is based on the concept of you are either with us or against us. There is no place in between. This derives from the Salafist principle of “tawally”​ and “tabarry.” According to tawally, human connections and mutual relations are bound within the narrow scope of believers. Meanwhile, relations with nonbelievers fall within the scope of tabarry, disassociating oneself from nonbelievers and separating them from believers so as not to affected by them.

Thus, men and women must convert to IS' belief system or be killed and all memory of them removed from history. Accordingly, IS has been converting the use of such religious buildings as churches, changing religious names and titles relating to other sects and rewriting religious curricula to conform to its Salafist vision. The tawally and tabarry project is applied at the level of history and memory to create a new kind of human being, completely removed from his or her national and cultural affiliations.

IS thus seeks to raise a new generation within a Salafist religious system with the value of hostility toward others. Thus, one finds photos and video footage of children holding severed heads of the alleged enemy or violators of Salafist rules, combat weapons and signs with hostile religious slogans, ultimately pointing them toward lives of separation, isolation and inhumanity.

Todenhoefer said the “nuclear tsunami” that is IS has yet to rise. It is slowly preparing itself to become the most destructive force in history. Its project is the complete destruction of civil life that has emerged in the region over thousands of years and its replacement with a barbaric system vehemently opposed to religion tolerance and cultural pluralism.