The shrine of Prophet Jonah was held as sacred by Jews, Christians and Muslims. 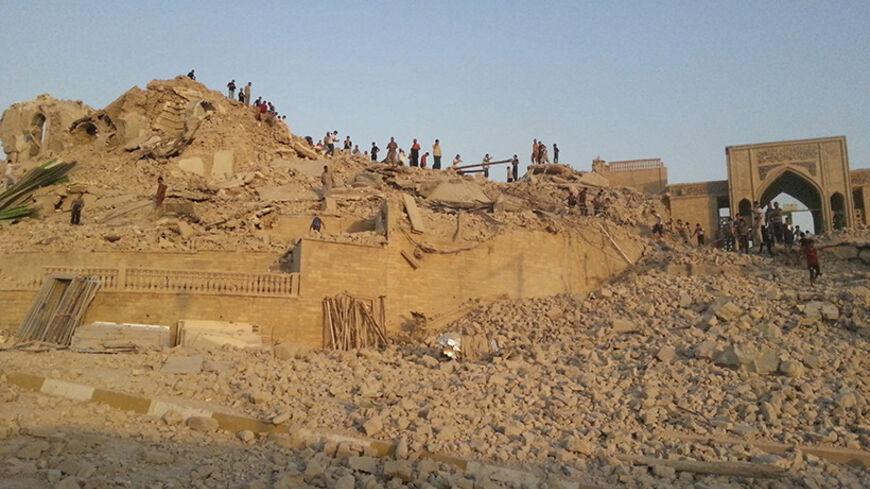 People walk through the rubble of the tomb of the Prophet Jonah (Yunus) in Mosul after it was destroyed in a bomb attack by militants of the Islamic State, July 24, 2014. - REUTERS

The Islamic State (IS) bombed and destroyed the tomb of the Prophet Jonah east of Mosul on July 24.

Previously, IS had carried out numerous bombings, destroying important cultural sites such as the shrine of the Prophet Daniel west of Mosul, the shrine of one of the grandchildren of the second Caliph Omar Bin al-Khattab, as well as mosques, various shrines and numerous other churches. These sites are not only for Shiite Muslims or non-Muslims. Most of them are sacred places for Sunni Muslims as well, and some are even only affiliated with them, in addition to a significant number of statues of famous figures and other cultural sites that also were destroyed.

Sources inside the city confirmed this information to Al-Monitor. Activists on social media networks uploaded pictures and several videos showing the magnitude of the destruction of cultural sites around the city. Sources told Al-Monitor that a state of sorrow and regret reigns in the city and that they have seen plenty of people crying while witnessing the destruction of Jonah’s tomb. Jonah is considered sacred by all Abrahamic religions: Judaism, Christianity and Islam.

What these groups are doing is based on an endemic Salafist principle common to most Salafist movements, whether they are jihadists or not. This principle underlines the need to purify the earth of polytheism and disbelief. These groups consider religious shrines or any other sites related to a certain person to be a kind of sanctification, which is, according to them, a true sign of polytheism.

The destruction of these sites is part of the process of returning to the authentic Islam and eliminating all alien elements, according to the Salafist understanding. This contradicts the traditional understanding of Islam by all Muslim confessions, which means that Islam does not contradict other sanctities, but rather understands them and considers them sacred, especially when the people of these sacred places are prophets of the Quran, such as the prophets Jonah and Daniel and many others from both the New and Old Testaments. 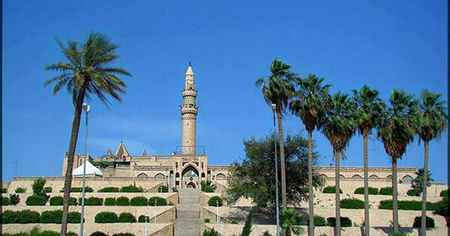 The tomb of the Prophet Jonah before its destruction. (Twitter/@IraqPics)

Therefore, international Muslim figures, such as the mufti of Egypt, condemned the destruction of sacred places by IS. The mufti also called for an urgent intervention from the authorities in Iraq and international organizations such as UNESCO to protect these sacred places.

The destruction of sacred places also happened during the establishment of Saudi Arabia, which was described as the first political entity for Salafists in the Islamic world. Hundreds of shrines of the prophet’s companions and family have been destroyed, in addition to other important historical sites related to different eras of Islamic history, from the establishment of the first and second Saudi states until this day. These actions also occurred in Afghanistan, Syria and certain areas in Iraq that fell under the control of Salafist groups.

IS threatened to continue the process of destroying sacred places of other confessions and religions, as well as others related to Sunnis. These threats raised the concerns of most Iraqis, especially the Shiites and the religious minorities, in addition to Sunnis who share the same respect and sanctification for these shrines and religious places.

It's mandatory for the international organizations concerned about human rights and preserving religious freedom and heritage, specifically UNESCO, to work harder and on a larger scale to put an end to this destruction. This is essential since a large number of these places are sanctified and respected by Judaism, Christianity and Islam.

The concerns about the destruction of sacred places are not limited to them being historic and cultural sites; they include forgiveness and coexistence between different religions and confessions in Iraq. Such destruction harms the long history of coexistence among Iraqi religions. It targets the symbols and main sites which attracted and gathered all confessions and paved the path for communication and understanding, and thus, their coexistence.

It also heightens intolerance and religious hatred and hostility between different confessions. This usually does not quickly fade away, and could create social divisions and demographic subdivisions on a large scale across Iraq. This could eliminate any sort of communication between the various elements of society and create severe conflicts between them.

Iraq is heading toward total destruction of its historic and human heritage, which will turn it into a barren desert isolated from its time-honored cultural and religious history. This is taking place in light of chaotic circumstances involving terrorism that is on the offensive, Iraqi government ignorance, global silence and an international letdown — specifically from the United States, which completely abandoned its responsibilities toward the situation in Iraq.