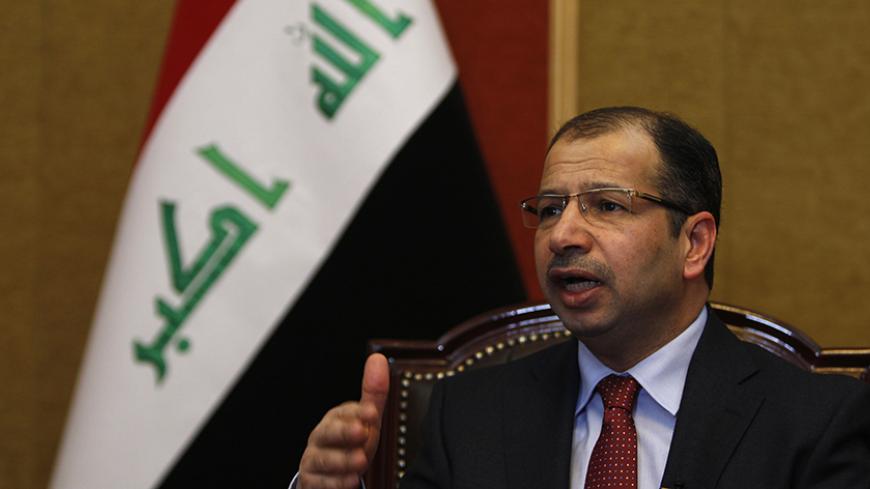 Speaker of the Iraqi Parliament Salim al-Jabouri speaks during an interview with Reuters in Baghdad, Jan. 14, 2015. - REUTERS/Ahmed Saad

After the US invasion of Iraq in 2003, the most used terms in the country are likely "political consensus," "consensual democracy" and "consensual decision." However, failures on all levels are often attributed to the lack of consensus, as some believe that achieving consensus in Iraq has become impossible and that division is inevitable.

One can say that the lack of consensus between different Iraqi parties and authorities has cost the country many opportunities at recovery. One can hold the political parties accountable for not believing in consensus from the beginning, and convince them of the importance of achieving — or at least seeking to reach — a consensus.

The year 2014 will be recorded as the year of historical setbacks in Iraq. It is also the year that Iraqi parties had to accept, perhaps for the first time, the concept of consensus as the standard for the upcoming phase, as a way to ensure the country’s unity and stability.

Ever since its formation, Prime Minister Haider al-Abadi’s government has adopted a method of consensus to represent all Iraqis, at a time when the country needs its citizens united on one goal, namely, to free the country from terrorism.

The current calm relations between the three key leadership figures — Abadi, President Fouad Massoum and Speaker of Parliament Salim al-Jabouri — and the ministers and deputies are an accurate reflection of the term “consensus.” This calm comes after years of standoffs between the three governmental heads, which was reflected on the political scene and the community.

Abadi, Massoum and Jabouri have witnessed a history of calm, moderation and the avoidance of political and sectarian conflicts, clearly foretelling the nature of the upcoming phase.

Though brief, the Iraqi “consensus” phase succeeded in reaching a fair agreement on oil revenues and the budget between Baghdad and the Kurdistan Regional Government (KRG) after years of conflict. This is a positive index to measure the possibility of reaching agreements on the basis of common interests and fair solutions.

It is true that the country is facing the threat of the Islamic State and that the atmosphere is veering toward war, not calm — however, Iraqi achievements in this crucial moment deserve attention. Instead of leaders seeking to acquire more power and suppress freedom during times of war — or even committing massacres and eliminating opponents — Iraqi leaders are behaving differently.

In a moment that could have led to the emergence of a dictator who would have escalated the situation to a religious war, the Iraqis, with international support, were able to come to a consensus; the agreement between political blocs on the September 2014 government formation is an example of where mutual concessions can lead.

The current political consensus in Iraq has not yet produced concrete, permanent and effective legislation, and it has not yet found a solution for the country's security, legal and economic crises. However, it clearly paves the way for all of this.

Abadi has allowed parliament to reshape the 2015 federal budget to adapt to declining oil prices and for the budgetary decision to be a collective decision, not one at the expense of one party over another.

The ongoing meetings between Abadi, Massoum and Jabouri reflect the image of a team that has been absent for years among these positions. The trio's relationship has changed the widespread image that these positions are separate.

True, all this does not exceed the symbolism of "consensus" and does not extend to the deep differences that still prevail in Iraq. But key politicians showing team spirit has a positive impact on the mood of the Iraqi street, which seems optimistic despite the gravity of the ordeal.

Starting with common political ground and working toward political and social consensus in Iraq are crucial steps in the country’s history. Its decisive results will be linked to the seriousness of the Iraqi parties in extending and deepening this atmosphere.