Iraqi leaders on track for cooperation

The atmosphere of cooperation currently prevailing among the Iraqi presidency, government and parliament should turn into a long-term project leading Iraq toward a better future. 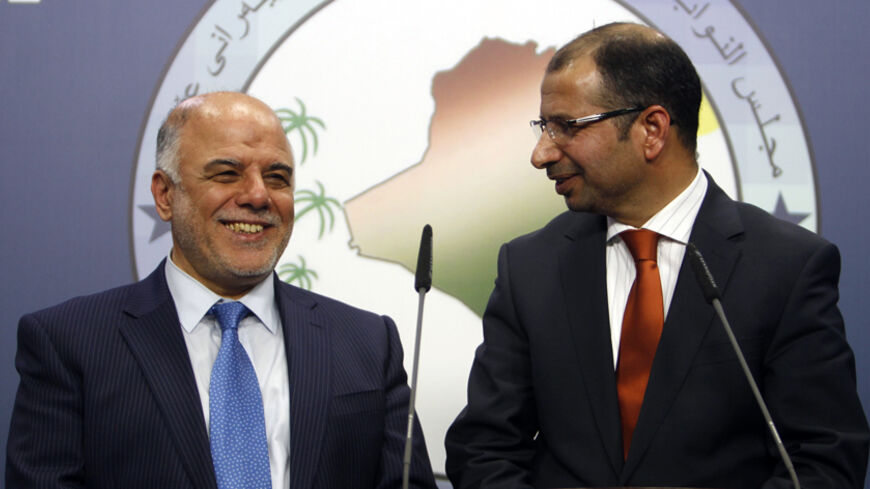 Relations among the top three Iraqi leaders — Prime Minister Haider al-Abadi, President Fouad Massoum and parliament Speaker Salim al-Jabouri — are thus far on the right path, with the tense atmosphere that plagued such relations over the past years having given way to friendlier interactions and a desire for cooperation and integration. This cooperation, however, should not be limited to fodder for the media. It should be integrated into the working context and turned into mechanisms that will allow these authorities to guide the country past the danger currently threatening it.

It is clear that cooperation between Abadi and Jabouri was positive early on and contributed to completing the formation of a government with the selection of ministers of defense and interior. Notably, neither man tried to blame the other for the delay for weeks in the selection of these last two ministers. This set the stage for filling their positions, which had be left vacant throughout the second term of former Prime Minister Nouri al-Maliki.

This important step could not have been achieved in the absence of an atmosphere of cooperation, which has prevailed since Abadi was tasked with forming a government. Abadi has even been asked to address the parliament on the security situation, and the prime minister has asked parliamentarians to open a discussion about developments on the ground, a request not made in previous legislative sessions.

The attitudes and statements of the top leaders reinforce the spirit of coordination between Abadi and Jabouri on the one hand and with Massoum on the other. The latter’s statements appear to be consistent with the general framework of the government, which differs from the previous situation, when the views of the president often seemed conflicting or divergent from the government's position on key issues.

The prime minister, president and speaker represent Iraq's three main societal components — the Sunnis, Shiites and Kurds. The performance of these three leaders can greatly influence relations between and among the components. Disagreements at the level of their governing positions could turn into conflict among their communities, which would be an extremely troubling development, as in the past this has negatively affected the overall situation in Iraq.

The current harmony relies to some extent on the efforts made by the leaders themselves, each presenting a conciliatory personality. In catering to domestic and international political and security pressures, they have all voiced the need for Iraq to be united in the fight against the Islamic State. This atmosphere needs to be used as the basis for Iraq's future and in that capacity turned into an ongoing, unified work project.

To preserve cooperation among the top three officeholders, their powers should be better delineated. According to the Iraqi Constitution and legal interpretations, there is overlap in the powers of their offices, but these should be clarified and codified by law to achieve long-term stability in terms of cooperation at the top of the leadership.

In accordance with Article 66, executive power rests with the presidency and the parliament, but the constitution does not specify the powers and responsibilities of each office. In addition, the parliament has suffered in the past years from misinterpretation of Article 60, where the prerogatives of the parliament and the government concerning the enactment of laws overlap. Article 103, on the supervision of the independent institutions and bodies, has also been problematic, creating constant conflict between the government and parliament.

The current healthy climate among Iraqi authorities must be quickly exploited to try to resolve the problems at the intersection of these powers and mechanisms. Events in Iraq have always allowed for the outbreak of major disputes, but without the possibility of relying on the leadership's qualities to maintain social peace and forge a long-term political consensus.

Reaching an understanding about these mechanisms is not impossible today, with everyone finally aware of the value of cooperation and the disastrous results caused by an atmosphere of conflict and partisan and personal bickering. The Abadi government should insist on submitting such mechanisms to parliamentary inquiry and control, and the parliament ought to secure more control of politics. Meanwhile, the two sides should reach an understanding on how to pass laws without delay and without the government’s bureaucracy obstructing implementation of fundamental laws. They must find a way to prevent internal parliamentary conflicts from blocking the actual passage of laws. This is the only way to put Iraq on the right path to the future.