To offset the drop in oil revenues, Iran can look to its petrochemical industry. 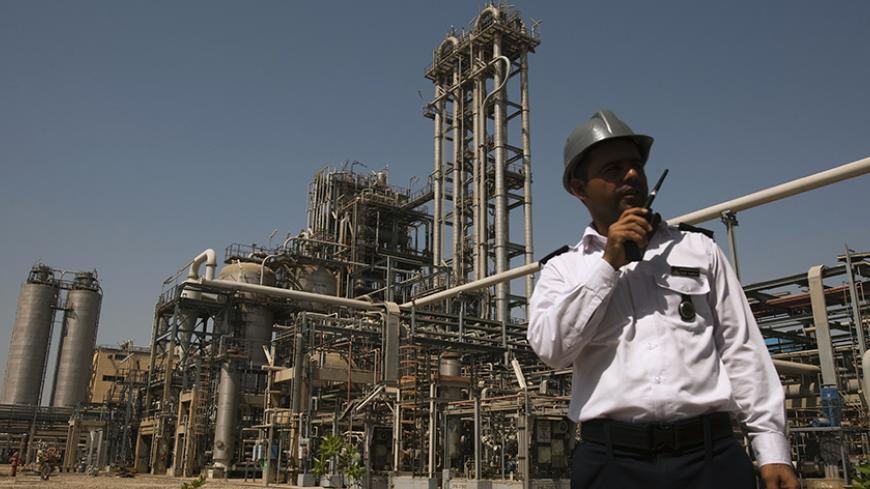 With oil prices in free fall, the more oil-rich OPEC member states, which chiefly depend on oil exports, are revising their projected revenues for their upcoming budgets downward and placing spending cuts on their agendas. Iran, as one of the top holders of energy resources in the world, is no exception, and senior officials have recently said it has suffered over $100 billion in revenue losses over the oil nosedive.

Already hit with years of Western sanctions over its nuclear program, the government of President Hassan Rouhani now finds itself facing a new source of pressure since oil prices have fallen 60% from their June 2014 peaks. In its proposed budget for the upcoming Iranian calendar year, which begins March 21, the government initially proposed a spending scheme based on the crude oil price of $72 a barrel. But with the continued slump in the energy markets, this figure was later lowered to $40 per barrel. For comparison, last year's budget was calculated assuming $100 per barrel of oil.

Meanwhile, Saudi Arabia, as the world's largest producer of crude oil and another OPEC member, has similarly admitted that the precipitous fall in oil prices since June will leave Riyadh with its first budget deficit since 2011. Some in Iran have lashed out at Saudi Arabia, accusing it of conspiring with the West to keep oil prices low in a bid to put more pressure on Tehran. On Jan. 13, Rouhani also warned that any countries contributing to the fall in global oil prices would regret the move and warned that Saudi Arabia and Kuwait would suffer alongside Iran.

For years, Iranian leaders have called for reduced reliance on oil, but the country has so far failed to see the dream realized, despite lowering its dependence on petrodollars and increasing its non-oil goods sales overseas. According to Iran's Customs Administration, the country's non-oil exports increased to $35 billion during the first eight months of the current Iranian year. The figure indicates a 20% increase compared with last year's corresponding period. As Iran's Oil Minister Bijan Namdar Zanganeh said, the country's oil industry could even weather crude oil prices as low as $25 per barrel.

The country's petrochemical industries, which enjoy abundant hydrocarbon reserves, soon began to develop. Their production capacity reached 5 million tons before the Islamic Revolution in 1979. Following the revolution and during the eight years of war with Iraq, the Iranian industry went into recession. It was, however, revived after the war during the presidency of Akbar Hashemi Rafsanjani and reached its peak in terms of investment and development during the tenure of Reformist President Mohammad Khatami.

Addressing a conference on the half-century-old Iranian petrochemical industry, Zanganeh pointed out that the Oil Ministry is seeking both foreign and private financing for Iran’s petrochemical projects. He went on to criticize the former government of President Mahmoud Ahmadinejad and stressed that the halting of investment in the country's petrochemical industry during his presidency was the result of "mismanagement and not the sanctions."

In addition to Iran’s oil exports, the country’s petrochemical industry was also struck with US-led sanctions. But under the Geneva interim agreement, signed by Iran and the five permanent members of the UN Security Council plus Germany in November 2013, the embargoes on Iran’s manufacturing and petrochemical industries were suspended. The results were immediate: The export of petrochemical goods, which after oil are Iran's second-largest source of income, saw a sharp increase.

According to Abbas Shari Moqaddam, the deputy oil minister and NPC president, Iran, which now plans to raise its petrochemical exports to $12 billion this year, has exported approximately 12 million tons of petrochemical products worth some $9 billion during the first nine months of the current Iranian year. The figure was a little above the $8 billion exported in the same period last year. Pointing to the current production capacity of 60 million tons, the NPC head added that the country's total capacity would increase to some 70 million tons per year once the unfinished petrochemical projects become available next year.

With the technological advancements in oil and gas hydrocarbons, "The value of produced products could increase by 10-20%," said Saeed Razmkhah, an Iranian expert on the oil and petrochemical industry in Tehran. He believes that Iran could use the petrochemical industry to both increase its revenues and cut the country’s reliance on crude oil. Razmkhah added, "Diversity of products, providing raw materials to thousands of factories and downstream workshops and creating job opportunities and fetching hard currency revenues have placed this industry in a prominent position in the country's economy."

Apart from attracting investment, which still looms as a major hurdle in the materialization of some goals in Iran's petrochemical industries, most of these industries have already been operating below their full output capacity due to the shortage in required feedstock. Oil Ministry officials have promised to resolve this shortage within the next few months.

With some energy experts predicting that oil prices will average below $60 per barrel in 2015, officials hope to attract enough investment for the country's petrochemical industries, which have been described as key to the government’s stated policy of maintaining a “resistance economy.”

Experts now believe Iran’s petrochemical industries will become an alternative economic engine and a platform for development. They also stress that for Iran, with a population of some 80 million, and also the developing economies of its neighboring states, the country's petrochemical industries could play a key part in jolting the economy out of its slump and bringing about growth Rouhani had promised in his election campaign.