Why did Iran, Morocco resume relations?

Economics, Iran's desire for greater international standing, the Islamic State and Western Sahara may be factors in Iran naming an ambassador to Morocco after a nearly six-year break in ties. 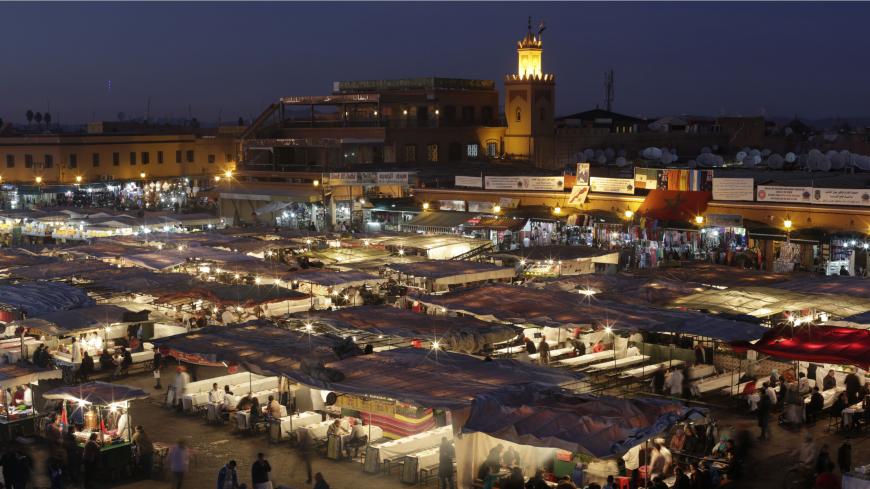 A view of Djamaa Lafna Square in Marrakesh's old city, Dec. 18, 2014. An Iranian ambassador has returned to Morocco after a nearly six-year absence. - REUTERS/Youssef Boudlal

Iran officially announced the appointment of Mohammad Taghi Moayed, a career diplomat familiar with the Maghreb who previously served in Tunisia. Rabat, however, has been more discreet about its rapprochement with the Islamic Republic. The kingdom has put conditions on resuming relations with Tehran; one of them is to obtain guarantees that Iran will refrain from proselytizing its own brand of Shiite Islam. Suspected religious activism, especially in northern Morocco, was one of the reasons that led Rabat to break diplomatic relations with Iran in March 2009. Morocco also cited Iran’s interference in the affairs of Bahrain, an allied Sunni monarchy ruling over a majority of Shiites. Diplomatic cables revealed by WikiLeaks later alleged that King Mohammed VI, without the knowledge of the Moroccan government, had unilaterally put an end to his country’s relations with Iran at Saudi Arabia’s request.

“Morocco’s relationship with Gulf countries is of prime importance, both economically and politically, especially since the Arab Spring, when Sunni monarchies formed an alliance to ward off popular revolutions. The kingdom’s relationship with Iran is anecdotal by comparison,” said Youssef Belal, an Iran specialist and a researcher in anthropology at the University of California, Berkeley. Gulf Cooperation Council (GCC) countries committed $5 billion in aid for the 2012-17 period to help sustain Morocco’s economy.

Why, then, has Iran been intent on a rapprochement with Morocco? “Because since Hassan Rouhani’s election [in June 2013], Iran is no longer a rogue state; Iran must show it is respectable again and seek out allies that are close to the West,” Belal told Al-Monitor in reference to Morocco’s alliance not only with Arab Gulf countries but also with European countries — particularly France and the United States.

Francois Nicoullaud, a French international policy analyst and former ambassador to Iran, said, “From the time they took office, President Rouhani and his team chose to erase the bad memories of [former President Mahmoud] Ahmadinejad’s reign and restore cordial, or at least normal, relations with several countries, starting with countries in the Arabian Peninsula and Morocco.”

Iran may have more to gain from its rapprochement with Morocco than the other way around. Nicoullaud said the Islamic Republic, since its formation in 1979, has vowed to spread its model to the rest of the Arab world. Article 11 of its constitution states that “it must constantly strive to bring about the political, economic and cultural unity of the Islamic world,” not only of the Shiite world. Also, Iran’s supreme leader is not only the guide of Iran but also of the ummah — the nation of all Muslim believers. In that sense and although Iran understands that Morocco will not accept its proselytizing activities, “Iran believes it must have relations with each and every Muslim country,” Nicoullaud said.

For Rachid Yalouh, a Moroccan who is a researcher in Iranian studies at the Emirates Policy Center, said, “Rouhani’s government needed to resume relations with Morocco in the face of its opponents at home, to show that it is now committed to moderation and its integration in the international community.”

And how would the kingdom of Morocco benefit from renewed relations with Iran? “From an economic standpoint, Morocco has very little to gain; even before relations were severed, exchanges were very limited with Iran. Morocco is much more dependent on its economic relationship with Arab Gulf countries,” Belal said. Although Iran and Morocco discussed a free trade agreement in 2004, by 2008 Morocco’s exports to Iran, mainly consisting of phosphates, only accounted for 1% of the kingdom’s total exports. Its imports from the Islamic Republic, mostly oil, only represented 2% of its total imports, according to official sources. WikiLeaks, however, published what it said was a 2010 cable from the US Consulate in Casablanca that indicated the economic ties were much stronger.

“If and when sanctions are lifted, Iran could develop into a more significant partner for Morocco, the way Turkey has over the past 10 years,” Belal said. The only way Morocco stands to benefit from stronger economic ties would be with the arrival of Iranian tourists and perhaps from cooperation in the agricultural field. For the rest, Iran’s industrial development and market of 78 million people dwarf Morocco’s emerging economy.

Though not essential to Moroccan diplomacy, reinforcing political ties with Iran could come in handy at a time when relations with Algeria are becoming increasingly strained over the Western Sahara file. In November, the separatist Western Sahara Polisario Front, which is supported and armed by Algeria, threatened to resume hostilities against Morocco following a speech by Mohammed in which he said the kingdom would stay in the contested territory “until the end of time.” Iran does not recognize the Sahrawi Arab Democratic Republic and does not the support the independence of Western Sahara, a territory controlled by Morocco since 1975. “Morocco is searching for new partnerships, perhaps to be used later as chips to put pressure on traditional partners who have not shown enough support regarding Western Sahara,” Yalouh said. The kingdom has also come to realize that “good relations between Tehran and Algiers were at the expense of Morocco’s interests,” he added.

Last but not least, Iran is increasingly becoming an unavoidable player in the fight against the Islamic State (IS), which is yet another shared topic of concern with Morocco. The kingdom has been dismantling cell after cell of jihadist hopefuls on its territory and fears that some of the 2,000 Moroccan nationals fighting along IS in Iraq and Syria will one day come back to strike. Like Iran, Morocco is very intent on neutralizing the advent of IS in the region.