Why Morocco really wants back in the African Union

The king of Morocco's recent declaration that his country wants to return to the African Union after a 32-year absence appears to be a political maneuver to gain ground in the Western Sahara dispute. 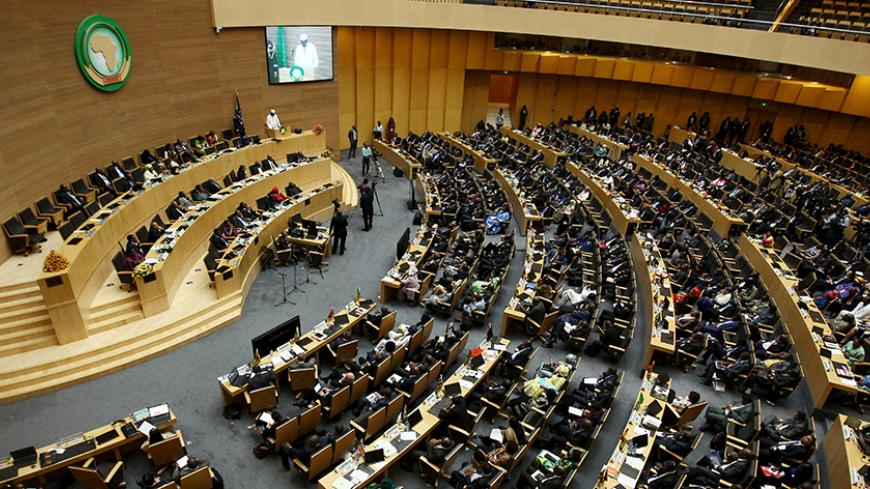 A general view shows the 26th Ordinary Session of the Assembly of the African Union (AU) at the AU headquarters in Ethiopia's capital, Addis Ababa, Jan. 31, 2016. - REUTERS/Tiksa Negeri

CAIRO — In a lengthy letter to a recent African Union (AU) summit in Rwanda, King Mohammed VI of Morocco declared his country’s intention to once again become a member of the union. Morocco withdrew from the AU’s predecessor, the Organization of African Unity (OAU), 32 years ago in protest of the group's support for the Polisario Front separatist movement and OAU's recognition of the Sahrawi Arab Democratic Republic (SADR).

The king’s July 17 message wasn’t void of reproach and blame toward the AU for its support of SADR, which has been a conflict zone since the Polisario was founded in 1973 to liberate Western Sahara from what it deemed “Moroccan colonialism.” However, the king did not explicitly call for the suspension of SADR’s membership as a condition of Morocco’s return to the AU.

Referring to Morocco’s anger over the AU’s support for SADR, Mohammed said, “That immoral fait accompli, that coup against international legality, led the Kingdom of Morocco to seek to avoid the division of Africa, and the price Morocco had to pay was the painful decision to leave its institutional family.” Yet, the king wrote, “On reflection, it has become clear to us that when a body is sick, it is treated more effectively from the inside than from the outside. … Morocco firmly believes in the wisdom of the AU and its ability to restore legality and correct mistakes along the way.”

An official at the AU general secretariat told Al-Monitor, on condition of anonymity, “The AU general secretariat is concerned that Morocco wants to return in order to argue the SADR issue from within the AU.” The official added, “Of course the African family welcomes Morocco’s return, but no one wants any debates or diplomatic disputes between member states. We want to work together for the benefit of the continent.”

The official added, “Morocco has now realized the AU’s importance and strength as a strong and influential entity and that leaving it is a significant diplomatic loss for any African country."

Morocco suspended its AU membership to pressure African countries, the official said. "It might be counting on [convincing] 16 African countries to withdraw their recognition of SADR and form a front to expel SADR from the AU. However, such action is neither recognized in international law nor in the AU charters.”

On the same day the Moroccan king conveyed his message to the AU, 28 of the union's 53 member countries signed a statement and had it delivered to AU Chairman Idriss Deby asking him to take legal action to suspend SADR's membership, to enable the AU to contribute to the United Nations' efforts to solve the regional dispute. At the same time, AU Commission Chairwoman Nkosazana Dlamini-Zuma reaffirmed the AU’s support for Western Sahara's independence.

Despite Egypt and Tunisia’s links to Morocco by virtue of a common Arab identity and geographic location, the two countries did not sign the statement to suspend SADR, nor did they issue any statements or official comments regarding Morocco’s return to the AU.

In this regard, Moroccan Foreign Minister Salaheddine Mezouar noted in a July 21 press conference in the country's capital, Rabat, “Friends of Morocco need some time to determine their position.”

Meanwhile, Algeria rejected any attempt to suspend SADR’s membership, with Prime Minister Abdelmalek Sellal saying in a press statement, “Demanding SADR to leave is impossible. Algeria does not have any problem with Morocco returning to the AU, as long as it does so without conditions.”

Statements given by officials in Morocco and Algeria revealed a new diplomatic disagreement between them over Western Sahara and place each in the awkward diplomatic position of picking sides within the AU.

For instance, the Moroccan press fiercely attacked Cairo, describing Egypt’s position as “a shock.” Although the Moroccan foreign minister had visited Cairo ahead of a summit on July 10 and informed the political administration of Morocco’s intention to return to the AU, Egypt remained silent during the entire summit.

Meanwhile, Mona Omar, former assistant to the Egyptian foreign minister on African affairs, told Al-Monitor, “Egypt had never recognized SADR, but Algeria strongly supports it, and Egypt is committed to taking neutral positions when it comes to Algeria and Morocco.”

Political science professor and expert on African affairs Hamdi Abdel-Rahman said the statement signed by 28 countries to expel SADR from the AU expresses “a political value rather than a legal action.”

“The political bonds between Egypt, Algeria and South Africa explain why Cairo did not sign,” he said.

Abdel-Rahman told Al-Monitor, “Egypt may see that cooperation with Algeria and Tunisia is more important at this stage, particularly with regard to joint coordination when it comes to the Libyan issue [the divided government and rise of the Islamic State], which directly threatens Egyptian national security.” However, he stressed that “Morocco’s return to the AU will have major repercussions, especially since it is a pivotal country in Africa and has strong relations and a significant influence in the Western African region. Morocco is not only important on political and economic levels, but from a cultural and religious perspective. Some Muslim countries in Western Africa praise the king of Morocco in Friday prayers as the caliph of the Muslims.”

Abdel-Rahman added, “Morocco adopts the stick-and-carrot policy in the dispute over the Sahara. First, it threatened to withdraw troops from peacekeeping missions in Africa and then pressured countries close to it to mobilize political positions to expel SADR from the AU. But such policies will be confronted by major African powers, most notably Algeria, South Africa and Nigeria, which believe in and defend the rights of the Sahrawi people.”

Meanwhile, Sabri al-Haw, a Moroccan expert in international law, told Al-Monitor, “The issue of unity and the dispute over the Sahara are the heart of Moroccan politics, and the decision to return to the AU was necessary to break the African consensus in support of the Polisario Front and protect Moroccan interests in Africa.”

Haw considers the statement signed by the 28 countries asking the AU to expel SADR to be a major political win for Morocco. “This statement shows a wide division within the AU and a lack of a deep-rooted doctrine to support Polisario,” Haw said.

It seems that Morocco’s new political and diplomatic orientation to return to the AU not only expresses its desire to exercise influence within the African institution, but also highlights a political maneuver through which Morocco is trying to undermine and restrict SADR since several countries have withdrawn their recognition of it during the past 10 years. This is bound to open a new chapter in the Moroccan dispute over the Western Sahara.