On the backdrop of significant efforts by Israeli Prime Minister Benjamin Netanyahu to strengthen ties with Africa, the invitation of Palestinian President Mahmoud Abbas to speak at the African Union summit could be considered as an Israeli failure. 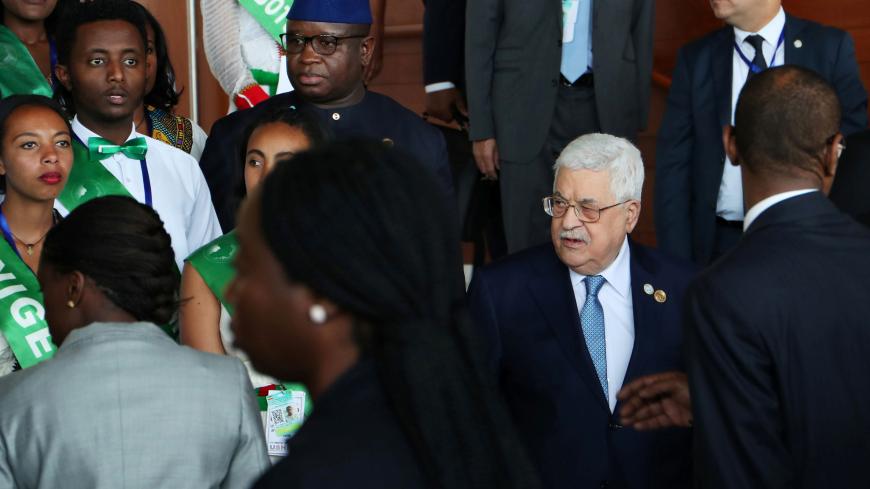 Palestinian President Mahmoud Abbas (R) arrives for the opening of the 32nd Ordinary Session of the Assembly of Heads of State and Government of the African Union in Addis Ababa, Ethiopia, Feb. 10, 2019. - REUTERS/Tiksa Negeri

Palestinian President Mahmoud Abbas arrived at the African Union (AU) summit Feb. 10 with a specific and detailed wish list. Addressing African leaders at the AU headquarters in Addis Ababa, Abbas asked for “additional support for the Palestinian issue in the coming period in order to achieve full membership for the State of Palestine in the United Nations.” He also called on African states “to support the idea of an international [Israeli-Palestinian peace] conference and to participate in it.”

The list of speakers at the summit was long and Abbas maximized well his five-minute speaking slot. Still, the important part of his visit was not really his speech, but rather the family photo taken at the end of the opening ceremony, with the Palestinian president standing right in front. Abbas was there; Israeli Prime Minister Benjamin Netanyahu was not.

And it is not as if Israel did not try hard enough. Israeli diplomats told Al-Monitor on several occasions that the Foreign Ministry prioritized links with AU seniors, hoping to regain the lost status. Special efforts were made on the level of AU officials posted in the Addis Ababa headquarters. True, when South African Nkosazana Dlamini-Zuma was elected AU Commission chair in 2012, Israel toned down its efforts, anticipating that Dlamini-Zuma would block Israeli advocacy. South African leadership had repeatedly expressed its support for the Palestinian cause in both words and deeds, and it is one of the leading countries of the boycott, divestment and sanctions movement to boycott Israel. But when the South African politician stepped down, Jerusalem felt that the road was clear again for a renewed campaign.

More so, in January 2018, Rwandan President Paul Kagame was elected AU chair, an appointment that opened for Israel new horizons and new hopes. Netanyahu and Kagame have developed over the past few years a close relationship and alliance. Kagame visited Israel several times; Netanyahu visited Kigali in July 2016, and is careful to meet with the Rwandan leader at international forums. During their latest meeting in November 2018, the two leaders agreed to open embassies in each other’s countries. This strong partnership even survived an unpleasant episode in 2018, when Kigali denied the existence of an agreement with Jerusalem to receive African immigrants deported by Israel. And with such a strong friendship, no wonder that the Israeli Foreign Ministry redoubled its efforts to integrate the AU.

Another reason for optimism lies in the Jan. 20 resumption of ties between Israel and Chad, especially since Chadian politician Moussa Faki Mahamat has been serving for the past two years as chair of the AU Commission. It would have been natural for Netanyahu to ask his new friend, Chadian President Idriss Deby, to support Israel on its AU campaign. In addition, renewing ties with Muslim Chad meant one less hostile voice to Israel in that forum.

But what for? Why does Israel need the observer status at the AU? A senior diplomatic source who had long served in Africa told Al-Monitor that there is more to it than just a competition with the Palestinians over visibility in international forums. Speaking on condition of anonymity, he said, "The AU is changing and becoming a real political power, representing the African continent. No serious moves can be taken on any conflict in the continent without the AU being involved. Its ties and cooperation with the UN, for instance, have considerably developed and evolved, and the group has gained much credibility in terms of security policy."

Despite Jerusalem’s hopes, 2018 went by without any tangible results on the AU front. In fact, Israel signaled on more than one occasion that it is more interested in bilateral alliances than multilateral ones — not the most constructive approach. And so, Jerusalem reached the end of Kagame’s mandate at the head of the AU with little results to show. Sentiments in Jerusalem were that significant diplomatic efforts had not been matched by significant efforts on the leadership level. On Chad, for instance, negotiations and talks focused on security, and to some extent on smart agriculture; the AU was not really an issue.

A senior Israeli political source told Al-Monitor on condition of anonymity that Israeli participation in regional cooperation projects could have played a role also vis-a-vis the AU, giving AU reluctant members the "excuse" they might have needed to bypass Muslim objections. "North African countries, for instance, are committed to the Palestinian struggle, but are not necessarily eager on campaigning against Israel. These countries have their own interests as well. If Israel would have advanced on regional water projects or other regional development projects with Jordan or with Egypt, these African countries could have tacitly dropped the Palestinian cause in the AU forum," the source said.

Indeed, Egypt could be a major factor in Israel’s African integration policy, for better or for worse. No doubt, the election of Egyptian President Abdel Fattah al-Sisi to replace Kagame at the helm of the AU for 2019 expedited the invitation for Abbas to speak at the February summit. And so, Israeli diplomats are not so optimistic. "Israel has many friends in Africa, including powerful countries such as Ethiopia, Kenya and Nigeria. Still, by nature, the AU likes making decisions on consensus, and Israel is far from being a consensual topic on the African continent," the source added.