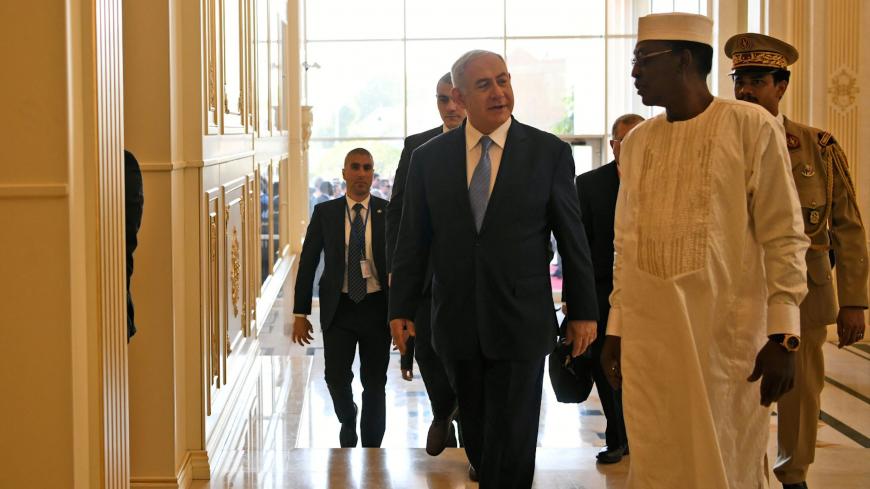 Standing side by side with Chadian President Idriss Deby at the presidential place in N’Djamena, Prime Minister Benjamin Netanyahu announced on Jan. 20 the resumption of diplomatic ties between the two countries, stating that "Chad is a very important country, and very important for Israel." Israeli media titled the event as historic, and correspondents from Jerusalem sent home descriptions of the city and its inhabitants for all Israelis to take part in the celebration.

Indeed, the resumption of bilateral ties, which were broken in the 1970s following Arab anti-Israeli pressure, is cause for celebration for Israeli diplomacy and a clear sign that winds in Muslim African countries are changing. Yet the enthusiastic coverage of the visit and Netanyahu’s declarations stood in stark contrast to the coverage of another international event two weeks ago on Dec. 31, namely Israel’s official exit from UNESCO. In fact, the word "noncoverage" would have been more appropriate in this case since local media ignored it almost completely.

The Israeli resolution to exit UNESCO was taken about a year ago after US President Donald Trump decided in October 2017 that the United States would quit the UN agency. At the time, Trump argued that UNESCO was bias against Israel, which was why the Americans were leaving. Israel rushed to join the United States, announcing that it would do the same. Still, for many pundits, the explanation provided by Trump was not the real reason behind his decision to bolt. There was the issue of financing, of course. More so, leaving UNESCO and stopping the American contribution was part of a global Trump approach against international organizations.

Ever since he took office, Trump expressed his dislike and contempt of the UN, of international law and even of the European Union (EU), considering them ineffective and anti-American. Apart from quitting UNESCO, the United States also withdrew from the UN Human Rights Council in June 2018, and senior American emissaries sharply criticized institutions like the International Criminal Court in The Hague.

Now it seems that Trump’s dislike of international forums has become contagious, planting deep roots in Netanyahu’s office as well. In fact, Prime Minister and Foreign Minister Benjamin Netanyahu has developed a foreign affairs worldview that goes even further. In August last year, Netanyahu said that "Israel is often mistreated by the EU in Brussels." One month later, he accused UNESCO of an anti-Semitic approach, citing that agency’s "persistent and egregious bias against Israel," and the list goes on. The UN, its agencies, the European Union and other international groups are all against Israel and its prime minister, he believes. This is why Israeli diplomacy must focus on establishing and deepening ties with "individual" countries, preferably countries that are ostracized by the international community the way Israel perhaps is. This way, the government can continue with its present policy of occupation while avoiding international isolation.

This approach was perhaps the reason why Israel decided to ignore the trip of Palestinian President Mahmoud Abbas on Jan. 15 to New York to assume the chairmanship of Group 77, a major coalition of developing countries at the UN. Netanyahu had apparently decided to let go of the battle on some of the international fronts, focusing on those countries that could offer him good photo-ops and the kind of alliances that suit him.

But this has not always been the case. For two years, until the end of 2017, Israel had delivered a fierce battle against Interpol accepting the Palestinians as a member state. Upon their acceptance in September 2017, Netanyahu warned that this step "seriously harms the chances to achieve peace," adding that the “diplomatic warfare” carried out by the Palestinians will not go unanswered. An Israeli diplomatic source admitted at the time to Al-Monitor that this was not just a diplomatic-declarative Israeli-American failure, but a move that could generate concrete and worrying consequences for senior Israeli security officials.

This change of strategy by Netanyahu, from international to bilateral, is visible on many occasions. In December 2017, Netanyahu visited Brussels, meeting European leaders and EU’s High Commissioner for Foreign and Security Affairs Federica Mogherini. Ahead of his meeting, Netanyahu stated that “Europe and Israel are important partners in three main areas: in the area of security, in the area of prosperity, in the area of peace. […] Europe is important; that's why I'm here.” But in the months that followed, Netanyahu multiplied his meetings with leaders considered anti-Europeans or Eurosceptic, like far-right Hungarian Prime Minister Viktor Orban, who visited Israel in June 2018, or neo-nationalist Italian Deputy Prime Minister Matteo Salvini, who visited Israel in December 2018. The only time Netanyahu has traveled to Brussels since December 2017 was on a few-hours trip on Dec. 3, 2018, to meet with US Secretary of State Mike Pompeo.

Israeli diplomats deplore this trend of ignoring the multinational arena. A senior source in the Israeli Foreign Ministry told Al-Monitor that leaving UNESCO hurts Israel first and foremost. "The one-on-one projects between Israeli academic institutions or nongovernmental organizations and UNESCO committees will continue, but we won’t have any voice in this forum, which has grown more important since French Audrey Azoulay was nominated chief. She is doing a great job at re-dynamizing this agency, and Israel could have used UNESCO as a showcase for our innovations and technologies, what we call ‘soft power,'" he said. According to the diplomat, instead of multiplying efforts on Israeli presence in international bodies, Israel seems to withdraw.

Still, sometimes bilateral and multilateral interests apparently converge. For several years, Israeli diplomats have been campaigning to regain the status of observer at the African Union (AU), which was lost in 2002. A window of opportunity opened at the beginning of 2018 when Rwanda President Paul Kagame took over the presidency of the AU. The excellent ties between Jerusalem and Rwanda lead several diplomats to believe that Kagame could advance the Israeli request. After meeting with Kagame in New York at the margins of the UN General Assembly, Netanyahu told reporters that they agreed to open embassies in each other’s countries and launch direct flights. No word was uttered about Israel re-entering the AU.

Resuming relations with Chad would certainly boost Israel’s efforts on that front. Chadian Moussa Faki Mahamat currently serves as the chairperson of the African Union Commission, the most powerful body of this forum. But for that to happen, Jerusalem — including on Netanyahu’s level — must refocus on multilateral diplomacy.

Israeli diplomats, so it seems, have not given up. Signaling their boss that they can still make a difference on international forums, Israel was elected on Tuesday to vice-chair of the committee of NGOs at the UN. True victories, they say, are achieved one step at the time.