What's on Morocco's agenda as it rejoins African Union?

Morocco wants to take advantage of its strong economic presence to gain political support in the Western Sahara dispute while becoming a hub for Western investments in the African continent. 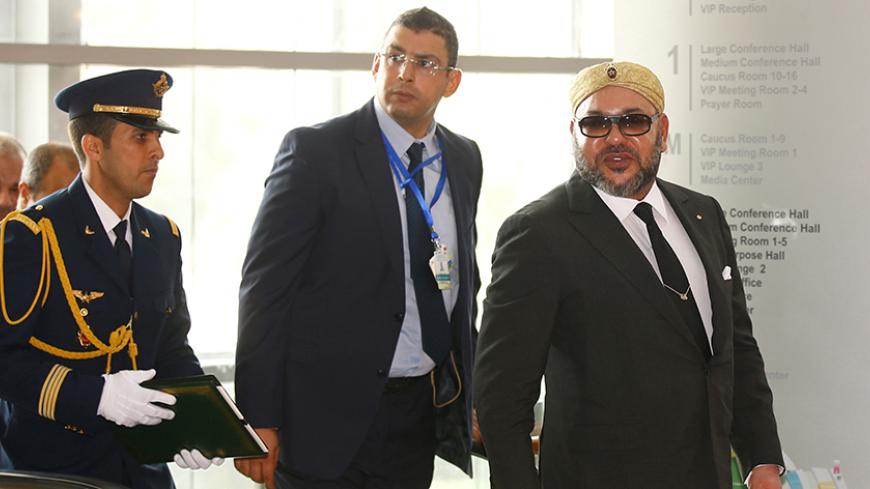 King Mohammed VI of Morocco (R) is escorted as he arrives at the 28th Ordinary Session of the Assembly of the Heads of State and the Government of the African Union in Addis Ababa, Ethiopia, Jan. 31, 2017. - REUTERS/Tiksa Negeri

Morocco is ready to raise its global stature, flexing its muscle before the world by joining the African Union (AU) and making clear what it can offer — or withhold — in the areas of finance and security.

The country’s investments, security and migration control will remain its power points with which to bargain for political support from the West, which in turn wants a greater presence in Africa.

Morocco wants to put to bed international friction over its decadeslong battle with the Polisario Front independence movement over disputed Western Sahara territory recognized by some countries as the Sahrawi Arab Democratic Republic (SADR). In fact, Morocco left the AU’s predecessor, the Organization of African Unity, in 1984 to protest the group’s admission of SADR.

But now Morocco is back.

On Jan. 31, Moroccan King Mohammed VI gave his first speech before the AU at a summit in Addis Ababa, Ethiopia, seeking to open a new relationship with the African bloc. Thirty-nine countries reportedly voted for Morocco’s return to the AU. Counting Morocco, 55 countries are now members of the union. The king has been touring eastern Africa during the past six months to gain support for his country’s AU bid, meeting with African leaders from Nigeria to Ethiopia to sign trade agreements.

Although Morocco has been out of the AU for decades, it maintains economic ties with other African countries. The king made that clear in his speech, emphasizing Morocco’s economic presence in the African continent.

“Strong bilateral relations have thus been significantly developed: Since 2000, Morocco has signed nearly a thousand agreements with African countries, in various fields of cooperation,” he said.

Some 85% of Morocco’s foreign investments are in Africa, varying from banks and agriculture to car insurance. Morocco is also Africa’s third-largest exporter after South Africa and Egypt. According to African Development Bank President Akinwumi Adesina, Morocco “is one of the bank’s best-performing portfolios on the continent.”

However, Morocco’s lengthy absence from the highest decision-making body in Africa has left it without much political capital regarding the Western Sahara issue.

Africa has a long history of decolonization, and the sensitivity of this particular matter has given the Sahrawi people’s right of self-determination a top priority on the AU agenda. Over the past three decades, the AU has been calling for a UN Security Council referendum on what is considered Africa’s last colony.

Issandr El Amrani is the Crisis Group’s North Africa project director, based in Rabat, Morocco’s capital. He believes there are two reasons Morocco insisted on becoming part of the AU.

“First, Morocco has gained little political support on the Western Sahara question within the AU, so it wants to weigh in along with other West African ally states,” he said. “Second, Morocco wants to become the intersection point between the West and West Africa.”

Amrani told Al-Monitor that Tanger Med Port in Morocco is considered one of Africa’s most important transshipment points, linking West Africa to the rest of the world, from Europe to North America to Asia.

Perhaps these goals explain the friendly tone of the Moroccan king’s speech, which was well-received and applauded by other African leaders.

“It is so good to be back home, after having been away for too long! It is a good day when you can show your affection for your beloved home,” Mohammed said.

Previously, Morocco set the expulsion of SADR as a precondition for it to join the AU. Though that demand has been dropped for now, observers still see the new approach as simply a way for Morocco to get along with others while it develops its long-run plan.

Academic and lecturer Patrick Delices, who specializes in African and Caribbean studies, told Al-Monitor, “The policy of Morocco remains the same regarding SADR, but its political approach is different, as it now elects to win over various member states within the AU in hopes of weakening the political influence of SADR, Algeria and South Africa on the continent of Africa.”

Nevertheless, SADR has had the upper hand within the AU for the past 30 years. Its allies — Algeria, South Africa and Nigeria — have been the major powers shaping the continent’s policies. Morocco has watched the developments closely, but has much less influence, so it is entering the union using a new strategy, rather than issuing demands.

“By joining the AU, Morocco is planning to become a major economic and political player in Africa by capturing markets and by eroding and subverting the political influence of SADR and its Polisario Front,” Delices said.

Beyond that, Bourita confirmed Delices’ assessment by adding that his country will “redouble its efforts” so African states that recognize SADR “change their position.”

The Moroccan king demonstrated that intention when he traveled to Juba immediately after the AU summit to meet South Sudan’s president, Salva Kiir Mayardit. During the early February state visit, Morocco agreed to fund a $5 million feasibility study on moving South Sudan’s capital from Juba to Ramciel. In 2011, South Sudan estimated the move would cost a total of $10 billion.

The youngest African state had previously recognized and pledged support for SADR. Some observers have alleged that the Moroccan king’s travels to South Sudan and other countries amount to a "bribery expedition" in which Morocco offers financial support to countries in exchange for their votes to revoke SADR’s membership in the AU.

“Globally, Morocco does not want to be seen as a kingdom engaged in colonialism and the negativity associated with it — economic exploitation and political oppression. Morocco wants to be viewed favorably by Africa and the rest of the world, especially as Africa's leading investor,” Delices told Al-Monitor.

Morocco is determined to establish stronger political and economic ties with African and European countries, but its return to the AU comes as the Western Sahara cause is becoming more visible in the European Union.

The EU Court of Justice recently decided to separate Western Sahara imports from EU-Moroccan trade agreements. Though it wasn’t clear why that move would endanger Morocco’s agreements, Morocco threatened to end economic cooperation with the EU unless a farm deal is renewed. Morocco’s state news agency, MAP, reported in an official statement that there would be “further repercussions” on the EU if the agreement isn’t extended.

Morocco has been an important partner in monitoring terrorist activity in Europe. Will the EU be forced to choose between respecting its justice system and taking care of its security concerns? The latter has been more challenging since terror attacks have taken place from France to Germany.

As a security partner, Morocco would be hard to lose. But breaching a judicial decision would also harm Europe’s reputation globally.

Morocco’s recent moves all demonstrate that it is unafraid to use its strengths as leverage both to dominate its enemy, SADR, and to improve its place in the world order.