Poor economic conditions have led to a crisis of non-performing loans for Iranian banks. 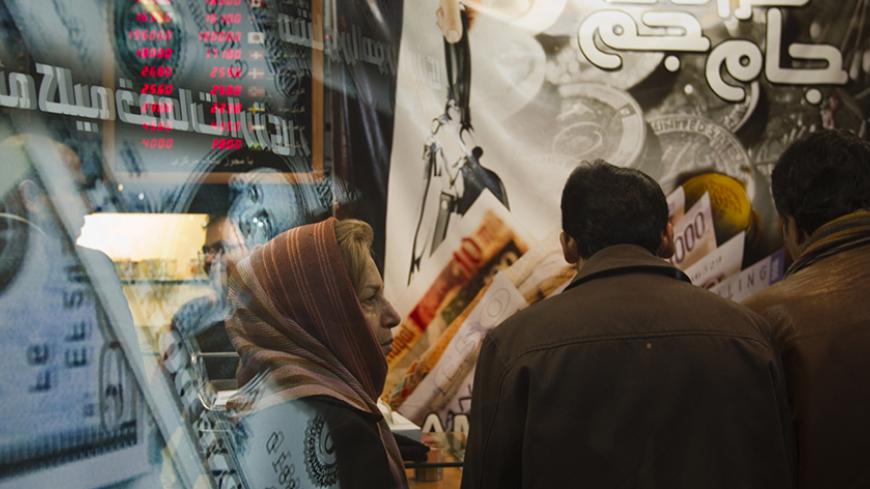 On Jan. 4-5, Tehran hosted the most significant economic conference held in Iran since 1979, with President Hassan Rouhani, his economic team and 1,500 economists focusing on the economic hardships that have surfaced in recent years.

The need for restructuring the banking system was among major issues discussed in the two-day event, while top monetary officials on the second day of the conference called on the commercial banks to be selective when offering loans.

Akbar Komijan, the deputy governor of the central bank, said in an address to the gathering that the banks should avoid providing loans to applicants whose business plans are not economically justified, implying that if the commercial banks do not provide enterprises with loans, the reason would be lack of eligibility of loan seekers, and not a lack of finances.

In the eight months ending Dec. 21, more than 60% of the granted loans were made to address cash flow issues, according to the central bank governor. The administration of former President Mahmoud Ahmadinejad forced commercial banks to provide financing for manufacturing units in an attempt to revive the economy, but the decision ended up hurting the banking system, as many individuals requested loans on the pretense of running a business, and never repaid them.

The banks have now been faced with a massive number of non-performing loans (NPLs) due to the combination of government’s lending directives to support failing enterprises and harsh depreciation of the rial in 2013 against major foreign currencies. The latter left many of the borrowers — especially those receiving loans in US dollars — paralyzed and unable to make interest or principal payments as contracted.

Commercial banks are now in a desperate situation as their NPL ratio, which pertains to the amount of bad loans computed against the total credit portfolio, is 15.6%, almost four times as much as the international standard of 4%.

The commercial banks, troubled with a lack of cash, are now left with few options to meet their daily needs. The central bank is complaining that the banks have been borrowing too much from the treasury. Komijani said at the conference that the banks' overdraft from the central bank is “inconveniencing” and called on them to find other ways to meet their needs for cash.

The commercial banks’ debt to the central bank stood at 620 trillion rials ($22.7 billion) in the month ending Feb. 9, 2014. The figure increased to 680 trillion rials ($24.9 trillion) in the month ending Sept. 21, 2014. A monetary expert in Tehran told Al-Monitor that the banks usually fail to pay off their debt, given the high interest rate of 32% for such loans. However, the expert asserted that the banks have no other choice but to borrow from either the central bank or one another.

“Some struggling banks are even given one-day loans by other financial institutions. These loans would let the banks meet their immediate needs for cash. There is no other alternative, as there is no money available,” the expert said, warning that Iran’s banking system is “on the verge of collapse.”

“Monetary officials are fearful that they would soon face a desperate situation as the NPLs cannot be recovered [anytime soon],” the expert said. “The banks lack sufficient cash to address their own problems or their peers’.”

Another option the banks can consider to boost their lending ability is to use the money held by the public in the form of gold and foreign currency, which is estimated to be around $21.5 billion collectively. The amount is more than five times the estimated gold reserves of the central bank, which is nearly $3.9 billion.

But what can the banking system do to regain public trust, and how far can it rely on people's money? Political economy experts say it would be a time-consuming process to regain the public trust, given years of economic turbulence sparked by macroeconomic mismanagement and crippling sanctions. Many believe that the lifting of sanctions is a shortcut to prosperity as they have so far blocked the Iranian government from tapping into the reduced oil income.

Since January 2014, less than $8 billion in Iranian assets blocked overseas have been released, as part of an interim nuclear deal between Tehran and the West. Another few billion are set to be released in several installments by June, as talks between Iran and the six world powers — the United States, Britain, France, China, Russia and Germany — continue over Iran’s nuclear program. But the amount is not nearly enough for the economy still heavily reliant on oil sales.

The lifting of sanctions would let Iran access $100 billion in foreign assets blocked in international banks in one go and resume economic relations with world nations, a move that would give a boost to the economy and the private sector in particular, which is heavily indebted to the banking system. But for now the negotiations are unlikely to result in a swift deal and the government can do little to shore up the stressed banks.

Among the few measures the regulator may take to help recover the sizable NPLs is create a specialized team or entity to address problems of bad debt. The latter appears to be in motion already. A company has been established in Tehran, composed of banks and insurance firms, but it has not officially started work yet.

Another measure that may save the banking system is publicizing the names of those who have failed to repay the heavy loans the banks were forced to give at half the inflation rate as a result of corrupt lending practices under the previous administration. In May, a list of 575 of the largest defaulters, whose debt collectively amounts to 250 trillion rials (about $9 billion), was handed to the central bank and the judiciary. But so far all the listed defaulters, mostly with alleged links with political circles, have been safe and sound freely doing business, without having concerns about being persecuted.