The success of Iranian President Hassan Rouhani’s economic reforms will ultimately depend on international sanctions relief. 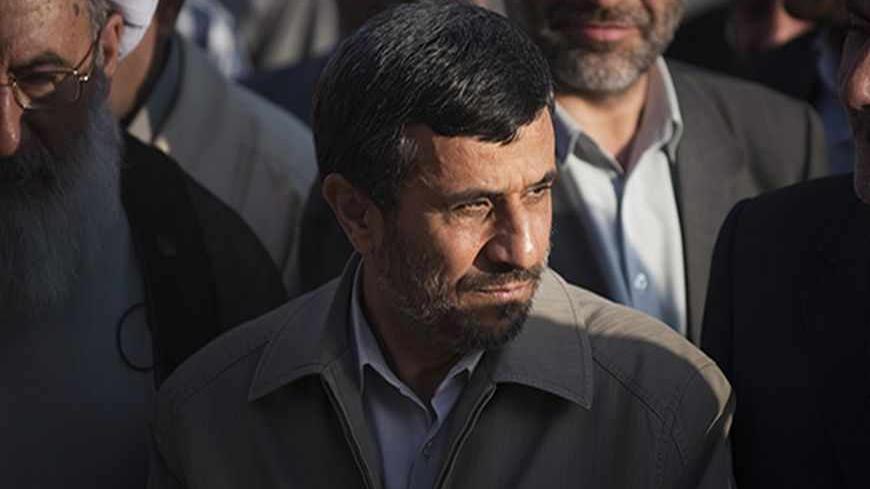 TEHRAN, Iran — On the last day of his presidency, Mahmoud Ahmadinejad traveled 30 kilometers (19 miles) east of Tehran to inaugurate a residential estate, one of hundreds he commissioned under his "Maskan-e Mehr" housing project to build 600,000 low-income homes across the Islamic Republic.

Iran’s new government say that the cheap credit Ahmadinejad used to fuel Maskan-e Mehr has devastated the economy. Many in Iran see the project — for which the former president famously auctioned off his 1977 Peugeot 504 — as emblematic of his approach to economic policy: Populist, redistributive initiatives turn into a herd of white elephants.

While new administrations want to blame their predecessors for their lousy economic inheritance, President Hassan Rouhani’s “government of hope and prudence” has good reason to be alarmed at the legacy of Maskan-e Mehr.

Since 2007, Ahmadinejad provided free government land and cheap credit to Maskan-e Mehr developers for homes for over 2 million Iranians. Abbas Ahmad Akhoundi, Iran’s new housing minister, said that 40% of the recent spike in inflation has been caused by the housing project.

Iranian officials from across the political spectrum have said that Ahmadinejad tapped the Central Bank of Iran (CBI) for 500 trillion rials (then worth $40 billion) to plug holes in the project’s budget, flooding the real economy with oil cash and sending liquidity and inflation soaring. Ironically, Maskan-e Mehr developers have become victims of the very inflation that their credit lines created — many are running over budget and there are reports of shortcuts in the construction.

Akhoundi said that the government was obliged to honor existing housing contracts with developers, but also said that the inflation they have caused means that the Maskan-e Mehr project would need to be quickly wound up.

“Did [Maskan-e Mehr] satisfy the people?" asked Akhoundi. "Did it have a positive effect on controlling prices? Was it able to create jobs in the wider economy? Was it possible for the project to proceed with the least effect on inflation? In reality, decreasing inflation will mean slowing down this scheme.”

Analysts in Tehran point out that the Mehr housing project was not the only beneficiary of unsustainably cheap credit during Ahmadinejad’s eight-year term. Domestic producers have become “addicted” to credit to offset losses caused by the cheap Chinese goods that flooded the market when Ahmadinejad relaxed of many of Iran’s protectionist import rules.

Valiollah Seif, the new CBI governor, has said that the base interest rate of 15% should be above inflation, but that it will remain unchanged in the short term to protect domestic producers and avoid choking off a recovery from Iran’s entrenched recession.

On Sept. 10, in his first televised address, Rouhani told the nation that the economy was experiencing “stagflation,” citing the Statistical Centre of Iran's figure of -5.4% growth and 44% year-on-year inflation.

“When the country’s [economy] is in 'stagflation,' the job is very tough because if there were only stagnation, we could adopt an expansion policy to fight it, while if the situation were inflation, we could control it with contraction strategies,” he explained. “But when both of them are issues, the work becomes very difficult.”

Experts in Tehran believe Rouhani’s administration will seek to use a fiscal, rather than monetary, policy to address the "stagflation." One analyst told Al-Monitor, “He will have to run an austerity budget. Borrowing money will send inflation up and upping bank rates will put companies out of business.”

This spring, Ahmadinejad announced a 2100 trillion rial ($65 billion) budget which has a 700-800 trillion rial (now $22-25 billion) hole in it, a deficit of over a third of the budget. Rouhani has indicated he will postpone a 500 trillion rial ($15 billion) cut to fuel subsidies to support poorer Iranians, and he is currently looking for ways to trim government expenditure.

On the revenue side, the government could borrow from the CBI or the National Development Fund, both of which store Iran’s oil wealth, but doing so would contribute to more inflation. Instead, Ali Tayyebnia, the new finance minister, has said he wishes to tackle the deficit by increasing the government’s tax base. Economists close to the government have suggested that the state should target “ultra-governmental companies” such as the Islamic Revolutionary Guard Corps and its subsidiaries, which traditionally evade tax.

Iran’s new government has much to do. While it can blame some of its current economic misfortune on Ahmadinejad, the main cause for inflation and the budget deficit is the EU and US sanctions on Iran’s banking and oil sectors, which triggered a crash in the currency and a concomitant price spike in Iran’s import-focused economy.

While Rouhani will be able to push through some reforms, particularly around customs, taxation and Iran's oil contractual regime, he is well aware that they will be only cosmetic if he cannot persuade the Americans to remove what are perhaps the most draconian sanctions ever to be placed on a country. Only then will the legal and psychological impediments that have cut the bulk of Iran’s trade be removed and the major structural economic problems resolved.

“On our side, we are absolutely ready for serious negotiations with the world, both with the P5+1 [the five permanent members of the UN Security Council plus Germany] and the International Atomic Energy Agency,” Rouhani said last night, hours after telling Friday-prayer-leading mullahs that talks could begin this month when he goes to New York to address the UN General Assembly. “The end of the game should be win-win for both sides.”