Russia’s economic influence in the Middle East is bound to suffer as its economy continues to decline; but whatever happens, Moscow will retain one of its most important sources of influence — its veto power in the UN Security Council. 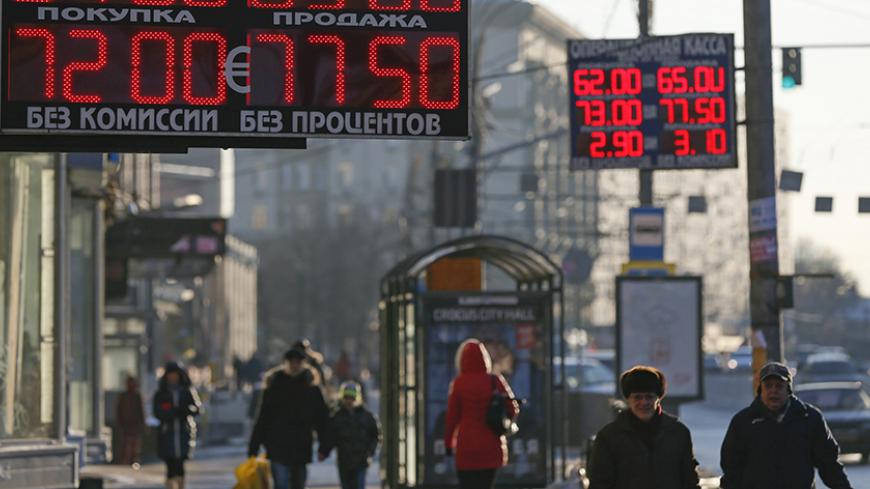 Russia’s desperate economic situation looks increasingly likely to limit its influence in the Middle East in the short to medium term — partly due to practical economic constraints, but also in the intangible world of perception. Nevertheless, Moscow’s most significant tool in the region does not depend on its economy and will remain largely undiminished in its effectiveness.

Moscow’s fundamental economic problem is bad policy. After years of exhortation, neither President Vladimir Putin nor Prime Minister Dmitry Medvedev has succeeded in diversifying Russia’s economy to reduce its vulnerability to volatile energy prices, or in combating the corruption that drains away much of the wealth Russia earns from energy exports and stifles small and medium businesses, or in promoting innovation to drive the advanced economy that Russia could have built. Their best move so far has been to amass considerable financial reserves that have saved Russia twice — in 2008-2009 and today. But even the roughly $400 billion that Russia still has won’t last forever.

Saudi Arabia’s continued willingness to endure the ongoing collapse in oil prices has inflicted a double blow on Russia’s economy, whether intentionally or not. First, of course, low prices have sharply reduced revenues for both Russia’s federal budget (which relies on oil-related taxes and duties for about 50% of its income and needs prices to average at or above $100 per barrel in 2015 to avoid deficits) and its energy companies. (Note also that Russia’s natural gas contracts typically link gas prices to oil prices with a time lag.) Second, because currency and stock traders know how much Russia depends on energy prices, plunging revenues have savaged the ruble — which has fallen from 32 to 64 to the dollar over the last 12 months. While not the principal cause of Russia’s economic problems, US and Western sanctions have compounded them by constraining Russia’s access to foreign financing at precisely the time when such access matters most.

In this environment, Russia’s economic influence in the Middle East is bound to suffer. The Kremlin is already slashing nondefense government spending. Russia’s leading state-owned energy companies — Gazprom and Rosneft — are under heavy pressure, too — though Gazprom’s ruble-denominated capital investment budget increased by about 4.5% from 2014 to 2015, its dollar value has plunged. According to Russia’s news agency Interfax, Gazprom is considering significant staffing cuts — up to 25%, or as many as 125,000 jobs.

At the same time, with energy export earnings in sharp decline, Russia will have to do everything it can to increase exports in other sectors. Two leading candidates — also dominated by state companies — will be arms exports and nuclear energy construction and services. Russian officials already work hard to promote these two sectors; however, neither lends itself to quick sales. And neither can easily replace lost budget revenue from oil sales that Russia’s Finance Minister Anton Siluanov estimates at 300 billion rubles ($4.6 billion at current exchange rates) if prices average $50 per barrel in 2015. With Russia’s 2015 federal budget at 15 trillion rubles, this represents a 2% reduction in revenue — without considering the ruble’s falling value, rising inflation and the Russian economy’s likely contraction.

Moreover, even where Russian firms find potential customers, they might not secure attractive contract terms — especially if its customers see the country’s weak economy as a source of leverage. China reportedly drove a hard bargain in last year’s enormous natural gas deal, to such an extent that one former senior energy official described it as being on the “edge of unprofitability.” Though they lack the advantages of state companies in the world’s second-largest economy, experienced negotiators in the Middle East may well press for favorable terms in their own talks with Russian counterparts.

Yet whatever happens to its economy, Moscow will retain one of the most important sources of its influence in the Middle East — its veto power in the UN Security Council. So long as Russia holds its veto and is demonstrably prepared to use it on behalf of its partners and friends, many governments will court the Kremlin if only to maintain possible Russian diplomatic support in times of crisis.

The contrast between the conflicts in Syria and Libya drives home the value of Russia’s diplomatic support for any government fearing internal unrest. Moscow’s multiple repeated efforts to block Western intervention in Syria have helped to give President Bashar al-Assad’s regime a fighting chance, while the Kremlin’s acquiescence in NATO airstrikes (a decision by then-President Dmitry Medvedev) in Libya led ultimately to late Libyan leader Moammar Gadhafi’s downfall and death. At the same time, former Egyptian President Hosni Mubarak’s fall illustrates that even a 30-year alliance with the United States might offer little comfort in such circumstances. These hard realities will work to Russia’s advantage, notwithstanding its economic crisis.

From this perspective, power and influence depend not only on statistics like the size of an economy or the strength of a military force, but also on perceptions — they are a product of not just capability, but will. Here, Putin’s willingness to use Russia’s UN veto and to absorb Western sanctions to pursue Russia’s interests in Ukraine will work in Moscow’s favor. If Russia sustains its defense spending — as the government appears to be attempting, probably in part because it maintains hundreds of thousands of jobs in a key Putin political constituency — that may also buttress Russia’s perceived resolve.

But will it be enough? The central question moving forward is whether perceptions of Russia’s and Putin’s political will can compensate for a sense that the country is in decline. Will adds to power and influence by establishing credibility, which a collapsing economy simultaneously undermines. The end result of this equation will appear in the minds of the Middle East’s political and business leaders; the rest of us can only guess at the calculations by watching their actions as 2015 moves onward.