Nasrallah vows to confront Israel at any time and place

In a broadcast speech, Hezbollah Secretary-General Hassan Nasrallah tried to re-establish deterrence with Israel after the two sides traded strikes. 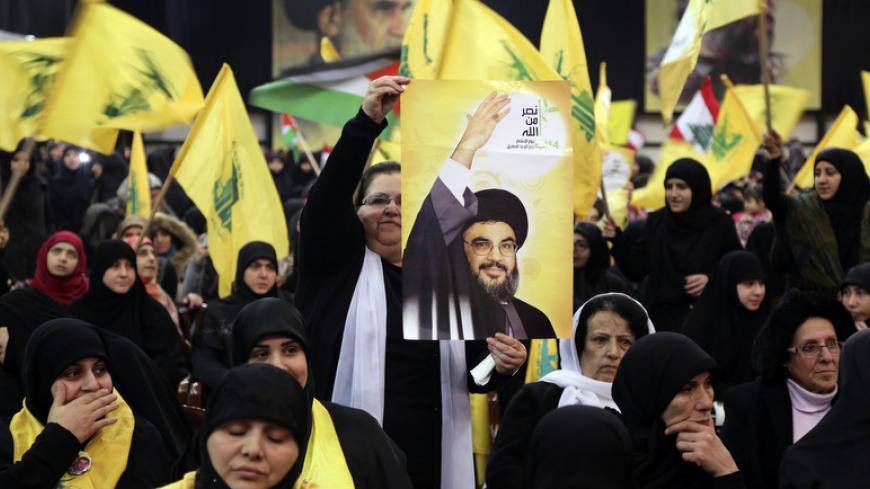 A supporter of Lebanon's Hezbollah leader Hassan Nasrallah holds up a poster of him as he appears on a screen to speak at an event to commemorate the deaths of six Hezbollah fighters and an Iranian general killed by an Israeli airstrike in Syria on Jan. 18, in Beirut's southern suburbs, Jan. 30, 2015. - REUTERS/Khalil Hassan

A war of words replaced a real war that could have erupted on the border between Lebanon and Israel following Hezbollah's Jan. 28 attack on Israeli soldiers, in retaliation for Israel’s assassination of six of its commanders and an Iranian general.

Hassan Nasrallah, the group’s chief, made it clear in a televised speech that from now on there would be no rules of engagement. He said that he did not fear a new war, yet he did not want a war.

"'Israel' must understand that the resistance is not and will not be deterred. It’s wise but still doesn't fear any war," said Nasrallah, who appeared on a screen before thousands of supporters in Beirut's southern suburbs. "The resistance no longer cares about rules of engagement, and we do not recognize them in confronting the enemy. We have the right to confront the enemy at any time, place or manner."

Nasrallah might be indicating that the front is no longer Lebanon's border with Israel, but Syria's border, too, along the Golan, where Israel's attack took place. "The most important message to Israel is: Do not mistake the calculations. I'm not talking about psychological warfare, but the mere truth, which we expressed in the battlefield."

Hezbollah’s attack in the Shebaa Farms was the second in three months. It marked a new pattern of operations in this occupied and disputed area since the 2006 war, which set new rules of engagement. Fears grew on both sides of the border that the standoff might lead to a major confrontation, yet, at the moment, the situation seemed to have been contained.

Nasrallah described the latest attack in the Shebaa Farms, stating that it was meant to be almost identical to the Israeli attack. "They assassinated us in broad daylight at around 11:30, and we killed them in broad daylight, 11:25 to 11:45. They targeted two cars. We targeted two cars. Plus, they attacked us by missiles and we did the same.” He warned: "You tried us. Don't test us once again."

Many in Beirut described the speech as the strongest toward Israel since 2013, when Nasrallah spoke at the funeral of the group’s slain commander, Hassan Lakkis. Today, Nasrallah's stances merged the situations of the region, as everything seemed to be out of control and the rules of engagement were becoming increasingly invisible.

"We understand that Israel wants to escape from military confrontation and go after the men responsible for Wednesday's operation,” he said. “From now on, if any cadre or member of Hezbollah is assassinated, then we will blame it on Israel and reserve the right to respond to it whenever and however we choose.”

This last statement means that Hezbollah will deal with Israeli assaults differently than before. An eye-for-an-eye strategy puts the ball once again in Israel's court, whereas, from Hezbollah’s point of view, Israel will be responsible for the repercussions that would follow if it attacked Hezbollah or assassinated another member. In other words, Nasrallah raised the stakes by setting new rules for the game — rules that could solidify deterrence and rule out fatal engagements in the near future.