Hamas officials see the flight of professionals and talented youth from the Gaza Strip as part of a systematic Israeli policy to empty the territory of skilled citizens through siege and regular wars. 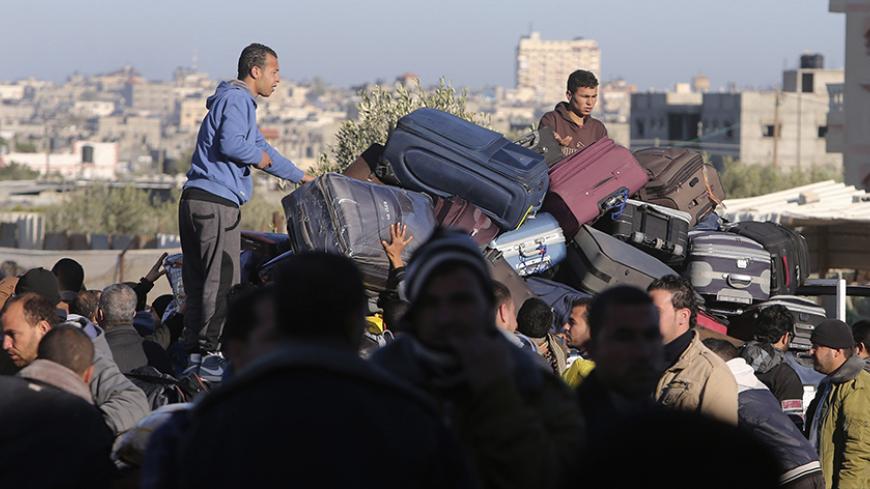 Palestinians load suitcases onto a cart as others, hoping to cross into Egypt, wait for travel permits at the Rafah crossing between Egypt and the southern Gaza Strip, Jan. 21, 2015. - REUTERS/Ibraheem Abu Mustafa

GAZA CITY, Gaza Strip — Dr. Marwan Sadeq, a Palestinian heart surgeon, emigrated from the Gaza Strip in late October 2014 to work at a university hospital in Austria. Sadeq was forced to leave Gaza under harsh conditions, most importantly the political fragmentation that has plagued Palestine for nearly eight years.

Gaza’s most famous surgeon told Al-Monitor in a telephone interview, “What prompted me to leave the Gaza Strip is our internal situation, which resulted in a lack of administrative stability in the health institutions, which no one is firmly leading and directing toward the best and most appropriate direction. Things are managed based on the idea of reducing damage rather than solving problems. This is in addition to the lack of development, vision and strategy.”

Amid these problems combined with the financial distress of Gaza ministries and continuous Israeli aggression, the Gaza Strip is suffering from brain drain.

“What made things worse is the disagreement I had with a charity foundation I worked at for more than two years, and which has not paid me and denied my financial dues. If I want to stay in Gaza, I would be settling for less and turn from a cardiac surgeon into someone whose only concern is how to feed his children,” Sadeq added.

“The Islamic University fired a large number of professors and rare specialists because of the financial crisis and bloated bureaucracy, which young professors have paid the price for. As a result, most of them have emigrated, and others are getting ready to,” said Otal, adding that many professionals have been fired due to austerity measures by institutions in the Gaza Strip. “The strangest part is that those who have been fired are not getting severance pay.”

He explained that political conditions have also played a role in the brain drain, saying, “I know of a university professor who emigrated to work in Norway due to the division and problems in the Gaza Strip, although his monthly salary was up to $3,000.”

Some news reports claim that thousands of Gazans emigrated last year, including advanced degree holders, most recently a group of cardiac and neurosurgeons. Al-Monitor contacted several governmental and international agencies to obtain accurate statistics on emigrants from the Gaza Strip over the past year or earlier, but they all said that they have not kept records.

“I communicated with a Canadian lawyer who told me that there are hundreds of immigration applications from Gaza to Canada, and all the applicants are the best minds and competencies. And it is well known that Canada opens the door to those, and I am one of those who applied to immigrate to Canada,” Otal said.

Otal said that a committee on Gaza youth issues distributed a questionnaire throughout Gaza to collect young people's opinions on immigration. It found that more than 90% of Gaza youth wish to emigrate from the Gaza Strip.

Despite the obvious drain brain in Gaza, government institutions deny this phenomenon. Head of the Youth Department at the Ministry of Youth and Sports Mahmoud Baroud told Al-Monitor that travel through the Rafah crossing has been disrupted for the past seven months. He added that under these circumstances, those claiming brain drain need to cite more accurate figures, since only those with residency permits and Egyptian passports and the extremely ill are allowed to travel.

Baroud accused Israel and its Arab allies of a “systematic policy” designed to empty Gaza of its professionals and bright young people.

“The opening of the tunnels and the Rafah crossing during the war and under the Israeli blockade show that the aim is to push Gazans to emigrate. This means that there are Arab, Israeli and US plans to empty the homeland,” he said.

Baroud explained that the Israeli occupation, its siege on Gaza and the regular wars it wages on Gaza are causing the emigration and brain drain from the Gaza Strip.

“The recent emigration of physicians in Gaza … exist in light of the siege on Gaza, lack of resources, harsh living conditions and a state of boredom, which led to the brain drain as well as capital flight. This is exactly what the [Israeli] occupation wants in order to empty the country of its citizens,” he added.

Baroud indicated that the only weapon available to the ministry to fight the immigration phenomenon, as a department concerned with young people and intellectuals, is awareness. He downplayed what Europe has to offer to immigrants despite the harsh economic, political and social conditions in Gaza.

“We explained to these youth that it is dangerous to emigrate and leave the country, but we support them in search for a living. We are with each one who tries to improve his abilities and who wants to shed light on the Gaza Strip and its suffering. Yet, we do not support the emigration of any mind that wants to escape the country and ignore the people and their country,” Baroud said.

With the Israeli blockade of the Gaza Strip going on for more than eight years, the division and administrative corruption among the Palestinian political elite and rising unemployment rates, the Gaza Strip continues to lose its bright young and professionals.