Several travel agencies in the Gaza Strip are taking part in illegal emigration, often taking thousands of dollars from would-be Palestinian emigrants who risk their lives to reach Europe. 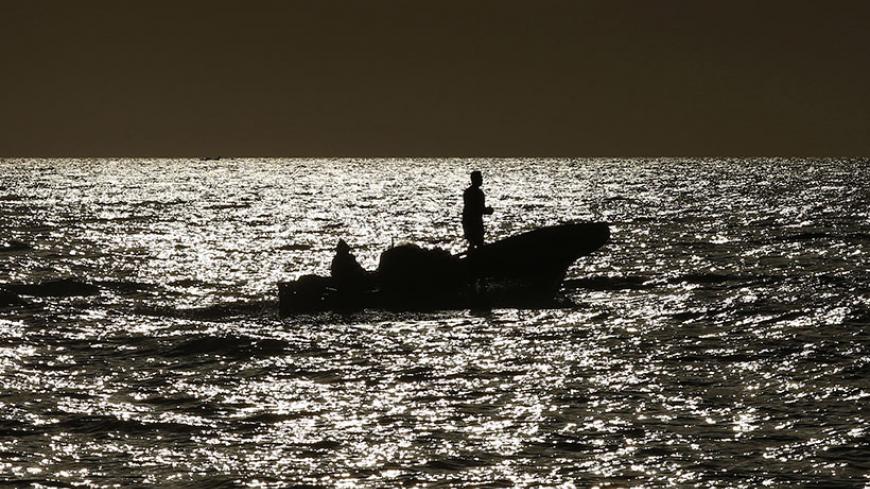 Palestinian men ride a boat in the Mediterranean Sea off the coast of Gaza City, April 28, 2014. - REUTERS/Mohammed Salem

GAZA CITY, Gaza Strip — Many young Gazans have been trying to emigrate for years. Al-Monitor interviewed three would-be emigrants, all on condition of anonymity, the first of whom said that he has been defrauded twice by travel agencies in the Gaza Strip, submitting to two separate offices requests to emigrate from Palestine. The 27-year-old tried a third time with the same result. Over two years, he has lost $2,000.

He told Al-Monitor that his attempts to emigrate began in his last year of college, about six years ago. Despite being subjected to fraud by illegal travel agencies working under the radar of the Gaza government, he insisted on trying again and again.

“The poor economic conditions in the Gaza Strip for more than eight years made me want to leave. I kept wasting my money until I had to borrow from friends. I was young and the travel offices that I visited took my money for 'initial costs.' After a while, they would tell me that the attempt hadn’t succeeded and that the money was nonrefundable because it paid for the cost of communicating with the embassies,” he said.

He said that the travel agencies he dealt with were less fraudulent than their peers, because he lost little money compared to other people who used other agencies. According to him, some other agencies went as far as dumping some of their young clients at sea near European shores.

Most Gaza youth dream of emigrating, even if via illegal or unsafe means. They are risking their lives as well as their money. The second person Al-Monitor spoke to, a 30-year-old Gazan, achieved more than our previous interviewee in terms of realizing part of his dream to leave Gaza. But the smugglers threw him and dozens of illegal immigrants in the Mediterranean Sea three years ago.

He miraculously survived. “I was in a small boat with dozens of young people, who decided to emigrate from several Arab countries, including Palestinians. The smugglers threw us in the middle of the sea, abandoned us and left us to our fate. We struggled with the waves for hours but thanks to divine help, I managed along with other young men to survive, and we were rescued by the Greek coast guard,” he said.

He told Al-Monitor that all Gaza travel and tourist offices lie. After he was deported back to the Gaza Strip, he confronted the agency. They told him that it was not responsible for what happened to him, and that those responsible were the smugglers who received the immigrants in Europe.

“I found out later that the owners of agencies in Gaza and the smugglers in Europe were splitting the money. So they are partners in all that is happening to us. They throw us away to die without doing anything to provide us security. All they care about is getting paid. They are taking part in human trafficking,” he said.

He pointed out that his urge to leave Gaza, as well as his lack of interest in certain details that would have revealed whether the travel agency was honest, got him into this problem, which almost cost him his life and more than $6,000.

The story of the third person Al-Monitor interviewed, a 23-year-old Gazan, slightly differs in terms of the size of the losses to him and his family. He left Gaza last year with the help of a travel agency which he paid $7,000 to get to Turkey and then to Romania. But once in Romania, he remained in asylum processing camps for about three months, putting an additional burden on his impoverished family in Gaza as they had to send him nearly $200 a month for expenses.

He told Al-Monitor that the experience was difficult, because he put his family in financial trouble and ended up returning to Gaza four months later. He said that to persuade him to pay the large sum — most of which he had borrowed — the owner of the “smuggling office” made the process seem easy and downplayed all obstacles.

He explained that nobody was overseeing the agencies and that they smuggled young people while escaping scrutiny. “No one has any evidence against those offices. They arrange half of the procedures legally for us. We went from Gaza to Egypt and from Egypt to Turkey legally. The rest of the procedures take place in coordination with the smugglers in Turkey. So the suspicion falls far from the [Gaza] agencies, despite the links and partnerships between the Gaza offices and European smugglers.”

Al-Monitor contacted a number of such travel agencies. Going undercover, I claimed to be a citizen who wished to emigrate from the Gaza Strip. Most agencies said they would be glad to “help” in return for an amount of at least $5,000. The price of issuing a visa for Europe, however, is often no more than $1,000, but the owner of a travel agency in central Gaza City justified this amount by citing long and exhaustive procedures. “We charge $5,000 to do the procedures for you to leave Gaza and get to Europe,” he said.

Al-Monitor subsequently followed up with the Gaza government department responsible for travel agencies. Rizk al-Helou, the director of the Department of Tourism in the Ministry of Tourism and Antiquities in Gaza, is responsible for awarding licenses to travel agencies. Helou said that there are a set of conditions for a travel agency license, the most important of which are a security approval by the Interior Ministry, a bank guarantee of about 4,000 Jordanian dinars ($5,650) in addition to having an office space.

Helou told Al-Monitor that the agencies are being monitored but not sufficiently, which led to the emergence of some agencies that operate illegal immigration. “There is no adequate monitoring by us of these offices, because a number of them work in exceptional circumstances, at a time when the government was [helping] those offices by postponing the payment of taxes and license fees due to lack of work,” he said.

Helou revealed that his department has received many citizen complaints about the travel agencies, and that his department has taken several measures. “After these [complaints], we closed some offices and rectified the situation of others. We still have pending issues with other offices. We will legally deal with any office that is shown to have broken the law, and we will stop it from operating,” he said.

Helou pointed out that he sometimes receives complaints involving a misunderstanding between a citizen and the travel agency, but that this does not preclude the possibility of many agencies operating illegally to help young people emigrate.