During Iraqi Prime Minister Haider al-Abadi’s visit to Cairo, the Egyptian government agreed to drop the Iraqi debt owed to Egypt, in exchange for oil shares that would come in handy in light of the energy crisis plaguing Egypt. 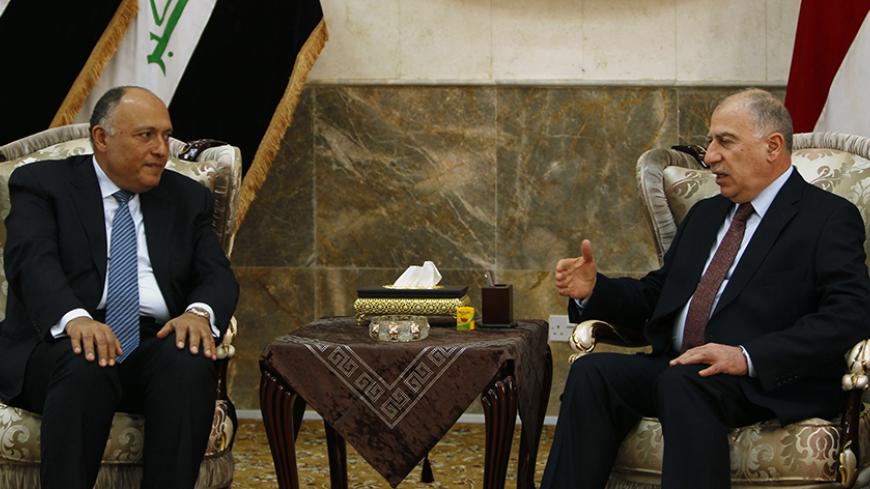 CAIRO — Iraqi Prime Minister Haider al-Abadi’s visit to Cairo on Jan. 11 included several political, military and economic agreements, and marked a new chapter in Egypt-Iraq relations. These agreements also contributed in expanding the cooperation areas to confront the Islamic State (IS), which, according to the Egyptian government, are a threat to its national security.

“There was an agreement to solve all outstanding issues between the two countries, especially the issue of the Iraqi debt owed to Egypt,” an Egyptian government official told Al-Monitor on condition of anonymity.

The issue of Iraq's debt has been plaguing the Iraqi-Egyptian relationship since the Central Bank of Iraq refused to pay $1.7 billion to Egypt.

“Dropping the debt in exchange for oil was the only solution to get the Egyptian dues in the form of a commodity that Egypt strongly needs in light of the energy crisis,” the source said. “There was no time to waste in new differences with Iraq, as the unstable situation in the region required finding a solution to this issue and new ways of cooperation.”

Negotiations between Abadi and Egyptian officials did not end at this point. The talks mainly focused on military cooperation at a time when Cairo was fully aware of the serious threat posed by IS to its national security, especially as large segments of young Egyptians were joining IS.

Egyptian Prime Minister Ibrahim Mahlab and his Iraqi counterpart announced in a news conference on Jan. 11 that Egypt supported the Iraqi government and army in the war against IS through the expansion of mutual coordination at the military and security levels.

An Egyptian diplomat told Al-Monitor on condition of anonymity, “Contacts are underway to activate the security, economic and military agreements in the coming days through the formation of a joint higher committee to follow up on their implementation.”

The diplomatic source said on condition of anonymity: “Supporting Iraq these days is no longer an option, but a necessity in light of the common terrorist threat facing both countries and the Arab region, and the lack of tangible results of the international coalition operations against IS.”

However, in light of the Egyptian domestic challenges and the unstable political and security situation facing President Abdel Fattah al-Sisi’s administration in governing the country, the question arises as to the extent to which Egypt can provide military and security support in the face of terrorism in Iraq. It is worth noting that Egypt had announced its military’s nonparticipation in the international coalition to confront IS.

Mohammed Mohsen Abu Nour, a researcher and specialist in international relations, told Al-Monitor, “Military cooperation with Iraq may include expansion in the provision of security and diplomatic services to confront IS.”

Abu Nour explained that “Egypt has pressure tools through which it can support the Abadi government. These include stopping Egyptians from joining IS ranks through an official decision banning Egyptians from traveling to six countries where the youth can join IS.”

“Egypt can also coordinate at the diplomatic level to place pressure on Iran, which is a big player in the Iraqi issue, and to expand the military training of Iraqi forces in Egypt,” Abu Nour added.

Former diplomats who previously worked on this file and spoke with Al-Monitor believe that the recent agreements signed between Egypt and Iraq fall in the context of prioritizing the common interests between both countries, and signing equitable agreements and deals in order for each party to get the help it needs.

Hussein Haridi, Egyptian ambassador and former assistant foreign minister, told Al-Monitor: “There is an acute energy crisis in Egypt, and constant efforts are deployed to find alternatives to secure Egypt's needs of oil in light of the economic problems. Therefore, its agreement with Iraq to drop the debt in exchange for oil is equitable.”

Haridi said, “Egypt's military expansion in the provision of services, logistic support and information to countries that are fighting terrorism is necessary now to participate in stopping the terrorist tide in the region, which may affect Egypt.”

Egyptian-Iraqi negotiations are continuing to discuss mechanisms for the implementation of what was agreed upon during Abadi’s visit to Cairo, and the possibilities of securing the Iraqi oil arrival in Cairo in light of the threats and unstable security situation.

Meanwhile, the Egyptian government continues to work on the establishment of an Arab alliance to counter the spread of Islamist organizations with terrorist ideologies.