Iraq is planning to supply Egypt with a million barrels of oil as both countries face a deteriorating relationship with Saudi Arabia. 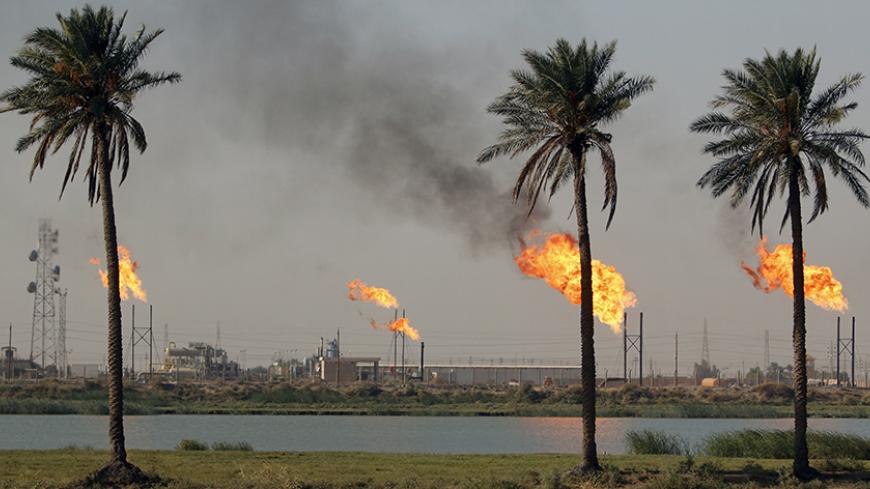 Flames emerge from a pipeline at the oil fields in Basra, southeast of Baghdad, Iraq, Oct. 14, 2016. - REUTERS/Essam Al-Sudani

Baghdad — On Oct. 17, Iraqi Oil Minister Jabar Ali al-Luaibi called on Egyptian companies to participate in oil investment contracts. He said during a meeting with the Egyptian ambassador in Baghdad, Hassan Ahmed Darwish, “It is necessary to strengthen relations between Iraq and Egypt, especially in the oil business.”

On the same day, Iraqi Prime Minister Haider al-Abadi spoke with Egyptian President Abdel Fattah al-Sisi over the phone to discuss the bilateral relations between the two countries and to unite efforts in the fight against terrorism.

Although Abadi was preoccupied with the battle of Mosul, that did not prevent him from contacting Sisi, which underlines Egypt's importance for Iraq as well as the significance of improving the Iraqi-Egyptian relationship in light of the current Saudi-Egyptian tension.

The meeting and phone call came a week after the Riyadh-Cairo relationship suffered a blow following Egypt voting in favor of the Russian project on the Syrian crisis. The fact that Iraq quickly communicated with the Egyptian government implies an Iraqi desire to rearrange its ties at the Arab level.

Iraq’s inclination to strengthen the relationship with Egypt in the oil business was met with an Egyptian desire to do the same, especially since the latter is experiencing some tension with Saudi Arabia. Thus, Iraq seems like a good option as an oil-rich country to resort to.

Iraq, which is also not on good terms with Saudi Arabia, wants to invest in the crisis between Riyadh and Cairo and give Egypt a chance to prevent its economic conditions from deteriorating now that its former ally, Saudi Arabia, is out of the picture. Thus, Iraq gains an important Arab country like Egypt and benefits from Saudi Arabia’s loss of such an important Arab ally.

On Oct. 14, an Egyptian government source revealed on condition of anonymity that following Russian-Iranian mediation, Cairo had reached an agreement with the Iraqi government to cover Egypt's oil needs and make up the shortfall in the Egyptian market’s necessities.

The Iraqi-Egyptian agreement came after Saudi oil company Aramco announced cutting the supply of petroleum products to Egypt, which provided an opportunity for Iraq to send an indirect message to Saudi Arabia showing its ability to support Egypt and all of Saudi Arabia’s Arab opponents.

Iraq is already supplying Egypt with 200,000 barrels of oil per month. However, now it will supply it with 1 million barrels per month, and this seems sufficient to meet Egypt’s oil needs.

On Oct. 16, Iraqi member of parliament Adnan al-Asadi called on supporting the Egyptian government by selling it oil on credit, like Iraq does with Jordan.

Asadi said in a press statement, “Saudi Arabia is currently launching an extortion campaign against Egypt for its positions in support of the Arab countries in the fight against extremism and armed groups. This is why we call on the parliament and the Cabinet to stand by Egypt’s side in support of its decision and in order to put an end to all political blackmail.”

Prior to this call, former Transport Minister Baqir Jabr Al-Zubeidi had called Oct. 13 on Abadi’s government to activate the memorandum of understanding signed between Iraq and Egypt, which stipulates providing Egypt with Iraqi crude oil.

Some Arab media outlets said the Iraqi-Egyptian rapprochement was provoking Saudi Arabia, given Iraq’s submission to Iran. In addition, some are warning Sisi of the consequences of the deepening relationship with Iraq based on the tension with Saudi Arabia, particularly with regard to the Egyptian labor force in the Gulf Cooperation Council countries.

Some might say Iraq and Egypt need each other, since after Aramco stopped supplying Egypt with oil, the Egyptian Ministry of Petroleum looked for a replacement but Iraq was the one to take the initiative since it needs Egypt, especially in terms of military expertise, just like Egypt needs oil.

Iran was kept in the loop of the oil rapprochement between Iraq and Egypt, and perhaps it was not even far from the political rapprochement when Egypt refused the presence of Turkish troops in Iraq. Now Tehran insists on the necessity of Cairo taking part in the Lausanne talks on Syria, to win the largest number of supporters and for Egypt to join the Iranian alliances on the Syrian crisis.

Iraq is certainly not going to be the sole beneficiary of supplying Egypt with oil; in addition to Cairo, Tehran may be the biggest beneficiary since it needs to strengthen its Arab alliances against Saudi Arabia, especially if it is with a former ally of Riyadh.

The fact that Egypt is no longer under Saudi Arabia’s cloak despite needing its oil represents a hard blow to Riyadh’s policy, which has so far lost twice — the first time when it was unable to control Egypt, and subsequently when signs of Egypt joining the alliance between Iraq, Iran and Syria showed, albeit indirectly.

Either way, Iraq now has the chance to lead the Arab scene once again or at least build new national alliances to strengthen its presence and positions on the Arab level, as well as take advantage of its relationship with Egypt to get what it wants from Saudi Arabia.

Iraq will not only pull Egypt closer on the political, security and economic levels, but it could even score some gains on the religious level if it was able to get a fatwa from Al-Azhar to help it fight extremism in the post-Islamic State phase, or even put an end to accusations claiming the Popular Mobilization Units is a sectarian, illegitimate force.

However, one might still wonder whether the current Iraqi diplomacy is able to understand the game and use the tension between Riyadh and Cairo to its advantage, or whether it would only provide oil and promote a positive relationship with Egypt without achieving any concrete results.