As social media activists in Egypt rally to demand faster and cheaper Internet services, the government of Ibrahim Mehleb asks citizens to limit their Internet consumption, a move many see as one austerity step too far. 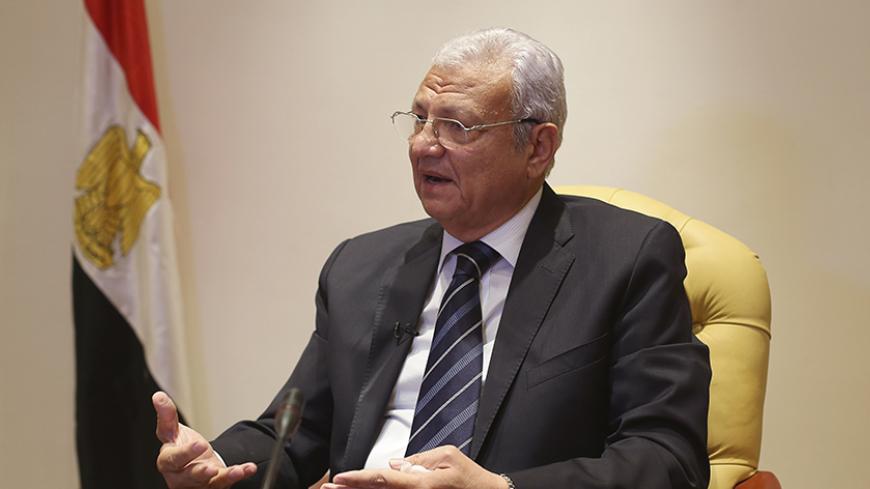 Egypt's Communications and Information Technology Minister Atef Helmy speaks during an interview with Reuters at the Smart Village on the outskirts of Cairo, Oct. 20, 2014. - REUTERS/Asmaa Waguih

CAIRO — In protest against poor Internet services, Egyptian activists set up a Facebook page titled "Internet Revolution,” launched an official website and printed application forms to enable the Internet Revolution movement to take legal action against the Ministry of Communications and Information Technology to provide services at a fair price. Meanwhile, Egypt’s Communications and Information Technology Minister Atef Helmy called on the Egyptian youth to control their Internet consumption, which caused a great deal of sarcasm on social media.

Helmy’s call to reduce Internet usage was considered by the youth as another joke by the current government, which is being described as the austerity government. The Egyptian people never imagined that the call for consumption control, which included the consumption of energy, water and education, would also include Internet usage. The role of the Internet in Egypt is not just limited to working more efficiently or to accessing knowledge. Rather, it has become a source of entertainment for millions of unemployed youth, and women who have missed their chances of getting married, in light of the high spinsterhood rate in Egypt.

Internet users in Egypt had seen a good omen in the meeting that was held between Egypt’s President Abdel Fattah al-Sisi and Helmy in late October 2014, during which Sisi stressed the need for high-speed Internet services and for improving the quality of the current Internet services provided to citizens. He also stressed the need to expand the use of government applications and electronic signatures through electronic services.

In mid-January, Helmy’s remarks dissipated this optimism as he called on the youth to control their Internet consumption, and blamed the January 25 Revolution for preventing the update of the telecommunications infrastructure network. He confirmed that since the outbreak of the revolution four years ago, there has not been any update in the telecommunications network. Helmy said that at the same time there was a significant increase in the number of Internet users, which was estimated at 19 million in 2010 and reached 48 million users in 2015 — not to mention users on illegal connections.

Islam Khalid, coordinator of the Internet Revolution movement, told Al-Monitor that the poor Internet services in Egypt are correlated to several factors, including that the Egyptian central Internet links still rely on copper connectors and suffer from jamming. He explained that regarding the mobile Internet service, the 3G network only covers 40% of the Egyptian territory, at a time when most countries are heading toward the 4G and 5G network. Khalid said, “In terms of comparing the high Internet cost to neighboring countries such as Morocco, we can find that 4 MB are provided for the equivalent of 84 Egyptian pounds ($11.27) a month in Morocco, while 2 MB are provided for 220 Egyptian pounds [$29.27] a month in Egypt.”

Khalid added that the exhausted infrastructure is the responsibility of the service providers, mainly Telecom Egypt, as 30% of the monthly subscription of Internet users are supposed to be used toward the infrastructure. Yet, this is not the case.

Khalid explained that the technical support team at the National Telecommunications Regulatory Authority is lacking professionalism. The team’s response is based on a booklet, rather than on the experience of resolving technical problems. When a customer reports an Internet problem, the technical support agent asks the caller to turn off the router first, and then to turn it on, instead of classifying and resolving the problem. And if the problem does not end once the router is turned off and on, the agent will say that there is a problem in the central system and that it will be resolved within a week — which does not happen.

Khalid said the monopoly of Internet services is a reason behind the poor service, where the state-owned Internet service provider TE Data establishes market prices. When a private company submits a quotation that is less than that of TE Data to the National Telecommunications Regulatory Authority, the latter rejects it because of the incentives they get that are linked to the profits of Egyptian Telecom.

Khalid stressed that the minister’s remarks to control Internet consumption is unheard of, and if the minister is referring to the illegal users, his ministry is responsible for this phenomenon due to the high prices. Ordinary citizens are more likely to resort to illegal connections because of the cost.

Zakaria Issa, an engineer and telecommunications expert, told Al-Monitor that the minister's remarks are unacceptable, simply because the use of the Internet is a commercial transaction, as the user is paying in advance for its use.

He added that the problem is caused by the delay in infrastructure development and the dependence on copper connectors at a time when most of the world’s countries shifted toward the use of optical fiber connectors.

Issa holds Telecom Egypt’s monopoly in the Egyptian market responsible for the absence of competition and a decline in the services provided to customers. He explained that the company does not carry out enough development projects to increase its profits; Telecom Egypt is also well aware that consumers are forced to resort to the company to access Internet services despite the low quality.

It seems that asking citizens to control their consumption has become the Egyptian government’s response when facing any crisis in the goods and services industries.