While the fourth-generation mobile data network arrived in Turkey this month, high costs, insufficient infrastructure and potential concerns from the government mean doubts remain about the extent to which it will benefit citizens. 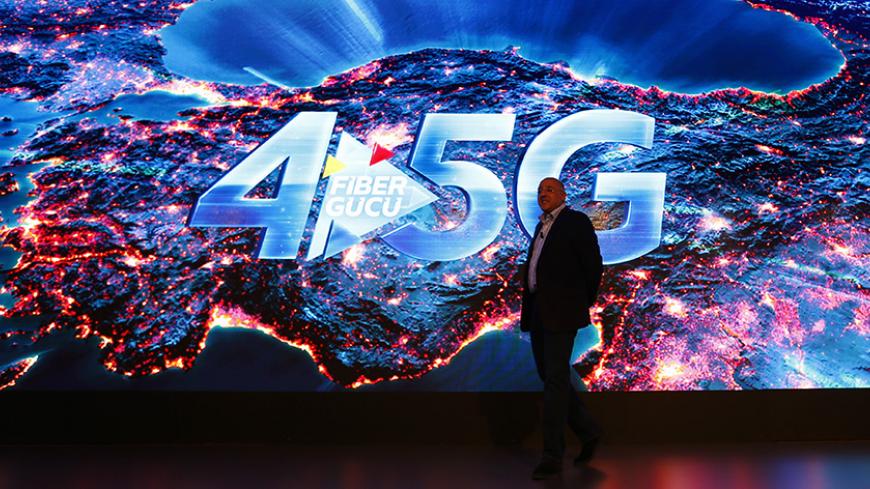 As Al-Monitor reported last year, Turkish mobile phone users had to wait for bureaucratic infighting and uncertain market conditions to clear up before they could use faster data connections. In May 2015, following an intervention by President Recep Tayyip Erdogan and lobbying efforts by a mobile service provider that was not ready to compete, Turkey’s Information and Communications Technologies Authority postponed the 4G tender to August 2015.

Today, those uncertainties seem to be a thing of the past. Turkey’s move to its self-declared "4.5G" network is taking place amid much pomp and fanfare. On April 1, Minister of Communications Binali Yildirim launched the new system by holding a videoconference with Erdogan, who was in Washington for the Nuclear Security Summit.

Turkish mobile operators have engaged in even more impressive marketing stunts to sell new phones and data plans. The market leader Turkcell appeals to popular and patriotic sentiments with its “bagliyiz biz” (we are tied / connected / loyal to each other) campaign. Vodafone, with its “4 bucak g” (4 corners g) campaign, showcases folk dancers from the four corners of Turkey performing their own regional dances as well as those of other areas. Former telecom monopoly Turk Telekom (previously Avea) takes a different route and uses Portuguese soccer star Cristiano Ronaldo to emphasize its 4G network’s speed.

These campaigns, however, have had a limited effect on the target audience. While service providers, phone vendors and consumers are excited about the long-awaited boost to connection speeds, high prices discourage customers. Three storeowners in Ankara’s affluent Cankaya district told Al-Monitor that although customers with phones that are not equipped to use mobile data have expressed interest in upgrading to 4G-compatible phones, they get cold feet upon finding out that the cheapest devices cost 750 Turkish lira (about $265).

To boost consumer demand and usage, Turkey must create a mature 4G network and, more importantly, a robust Internet infrastructure.

Kozan Demircan, one of the country’s leading technology experts, calls the new 4.5G an “April Fool’s joke” because Turkey simply does not have the fiber optic network to support the promised connection speeds. High levels of fiber optic penetration (an area in which Turkey comes up short) enable high-quality connections between personal computers, mobile devices and cell towers.

These shortcomings slow connection speeds. Demircan points out that “whereas the targeted speed with 4.5G is around 330 to 400 megabits per second [Mbps], average connection speeds are 30-40 Mbps.” Although those figures are a respectable improvement over actual speeds of 14 Mbps on the 3G network, even those limited speeds are not available to Turks who live in major cities such as Istanbul and Ankara. (According to Akamai Technologies, a global content delivery company, Turkey’s average Internet connection speed was 6.2 Mbps in the third quarter of 2015.) As Demircan warns, there is a positive relationship between high broadband Internet penetration and its contribution to high levels of national income.

So why does Turkey focus on the flashy aspects of the 4G network but not do the heavy lifting (and digging) that would help to grow its economy?

A big part of the problem is the Turkish state’s inability to open up the market to competition. In particular, Turk Telekom, which owns most of the fiber optic network thanks to its former status as Turkey’s telecom monopoly, does not want to share its property with service providers. Likewise, Turkish municipalities continue to charge exorbitant fees whenever service providers attempt to lay new fiber optic cables.

A bigger challenge is the allegation that the Turkish state and the ruling Justice and Development Party (AKP) view high-speed Internet with suspicion. One Turkish Internet expert and former government employee told Al-Monitor on condition of anonymity that after the Gezi protests of 2013 and the Gulen-AKP fallout in early 2014, the state — especially the national security apparatus — has become wary of very high Internet connections. “You cannot upload high-quality videos or extended audio files on the 3G,” said the expert. So there is not much enthusiasm to improve conditions through the 4G network.

That last point is particularly unfortunate considering that much of the hardware and software for Turkey’s new 4G network was supposed to be based on the indigenous ULAK system. Developed through public-private cooperation under the guidance of the Ministry of Communication and the Undersecretariat for Defense Industries, the ULAK system could have provided a majority of the new 4G-compatible 80,000 cell towers and saved Turkey considerable sums in foreign currency. However, Turkey’s renowned technology expert and entrepreneur Fusun Sarp Nebil warns that only 1,700 ULAK towers may become part of the 4G network.

Nebil raises the agonizing possibility that Turkey, having had a late start to the 4G game, could also miss out on the 5G system once it debuts in 2020 and fall further behind in economic development.