Egyptian authorities have reportedly shut down a Cairo cafe that was popular among atheists, though some activists say that the officials' display of force is little more than a media show. 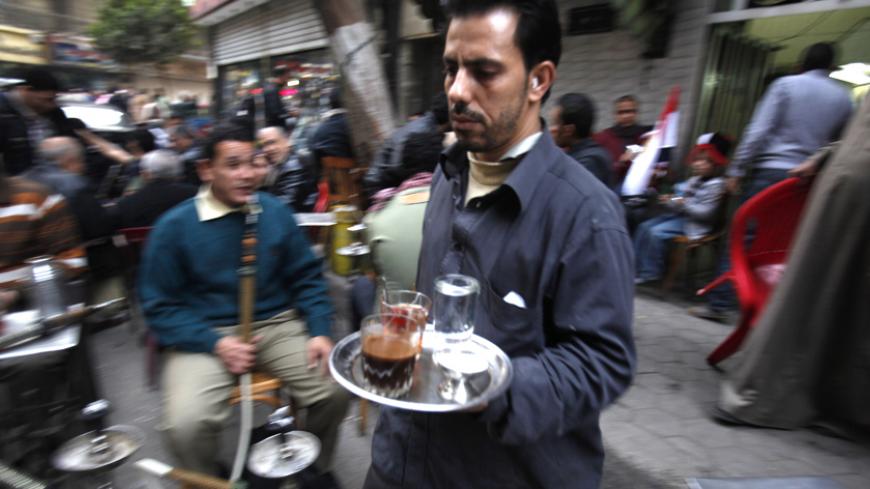 A man delivers coffee in a cafe near Tahrir Square in Cairo, Feb. 9, 2011. - REUTERS/Asmaa Waguih

On Dec. 14, Egyptian news sites reported that Gamal Mohi, chief of the Abdeen neighborhood, led a group of policemen to close down Hikayatuna Cafe in downtown Cairo. Mohi said that the cafe had been housing groups of young atheists. The crackdown came a few days following the Dar al-Ifta al-Misriyyah's (Egyptian House of Fatwas) report that Egypt has the highest population of atheists in the Arab world at 866.

Mohi's statements sparked satirical comments on social networking sites. In a press statement, the governor of Cairo said that the cafe was shut down because it was not licensed, not because it was frequented by atheists.

Legal expert Mahmoud Kbeish told Al-Monitor, "The Egyptian Constitution guarantees the freedom of belief, and atheism is not punished by the penal code. However, defamation of religion is punishable according to Article 98 of the constitution."

Mustafa al-Baghdadi, a political activist in the April 6 Youth Movement, said on Facebook that he owns the Hikayatuna Cafe, and that it had been closed weeks before Mohi's campaign, which he called a "media show."

Al-Monitor tried to get in touch with founders of Arabic-language atheist Facebook pages to confirm that the cafe had been closed down weeks before. The man in charge of the "I’m an Atheist" page spoke to Al-Monitor on condition of anonymity, for fear of reprisal. "I believe it is just media propaganda to show that the state is fighting against atheists and so that the neighborhood chief wins some fame. I do not know anyone who was present when the cafe was shut down," he said.

The moderator of the "Atheists against religions" Facebook page told Al-Monitor: "I do not know anyone who was present during the shutting down of the cafe. Some friends assured me that the place had already been closed [before the crackdown]."

Baghdadi told Al-Monitor via Facebook: "I closed down the cafe myself six months ago [June 2014] as I was being harassed by the security services, since the coffee shop is located in one of the gathering points of the April 6 Youth Movement activists. I leased it out to someone, who reopened it only to shut it down once again in light of the clampdown on lawbreaking cafes in downtown Cairo two months ago [October 2014]. The neighborhood chief led a group of policemen and sealed off the already closed coffee shop with red wax. The campaign is a mere 'media show.'"

Al-Monitor asked Baghdadi to present documents proving his ownership of the cafe, but he declined. All his papers were with his lawyer, who he could not get a hold of via telephone.

Al-Monitor asked the owner of a company on El-Falaki Street about the closing. He said, "I do not know whether the cafe was already closed or not. However, I saw the neighborhood chief with a group of policemen confiscating its contents, including seats and devices, and sealing the doors with red wax."

A resident of El-Falaki Street, who lives near the cafe, said, "The cafe had already been closed as part of the previous campaign on lawbreaking cafes in downtown Cairo two months ago. However, the place reopened when things went back to normal, but it was shut down again following complaints about noises and disturbance by some residents."

Hikayatuna Cafe was not the only coffee shop targeted by Mohi's recent campaign in the neighborhood.

A guard at a nearby property on El-Falaki Street confirmed the story of the street's resident. "The cafe was indeed shut down during the previous clampdown on cafes two months ago. It reopened a few days later and then closed down again a few weeks before Mohi's recent campaign, during which policemen broke down the shop's doors and confiscated its contents and then sealed it with red wax," he said.

Is the state truly seeking to crack down on atheists, or is this just a media show?

The moderator of the "I’m an Atheist" Facebook page believes that the crackdown is media propaganda, as the state is cracking down on atheists who have appeared in the media or are involved in opposition political activities, as is the case with Albert Saber and Kareem Amer, who have been sentenced on charges of contempt of religion. "Atheists who are not politically active or do not appear in the media are not being harassed by the state," he said.

Ahmed Turk and Nemat Satti take a different view. The two men are in charge of a joint campaign launched by the Ministry of Youth with the Ministry of Awqaf to fight the spread of atheism. They told Al-Monitor, "The campaign is still ongoing and is succeeding in achieving its goals." However, in previous statements to Al-Monitor, the two men said that the campaign did not have any measurable goals, making it difficult to determine the extent of its success or failure.

Amr Izzat, a human rights activist at the Egyptian Initiative for Personal Rights, told Al-Monitor, "I'm surprised that the state decided to fight against atheism as if it were some sort of disease. It is imperative to open channels of dialogue to discuss the issue of religion in a civilized manner, without shaming anyone espousing different ideologies and concepts."

The state's actions to control the spread of atheism remain limited. The state is not interested in chasing down the moderators of atheist pages on social media, even though the Dar al-Ifta al-Misriyyah's report stated that social networking sites are important hubs for the spread of atheism. Tracking down the people in charge of these pages would be easy for the state. State agencies previously tracked down Wael Ghonim, the moderator of the "We are all Khaled Saeed" Facebook page, and arrested him during the events of Jan. 25.

The state's crackdown on Hikayatuna Cafe and its campaign to fight atheism are seen by some as attempts to gain fame and to improve the image of the state's religious institutions in the eyes of Saudi Arabia, which is supporting Egypt economically. Saudi Arabia could provide less support to Egypt should authorities fail to contain the wave of atheism, which, in Saudi Arabia, is a crime punishable by death.