Al-Qaeda's deadly terror attack in Paris may have been an attempt to restate its relevance and effectiveness in its global jihadist struggle with the Islamic State. 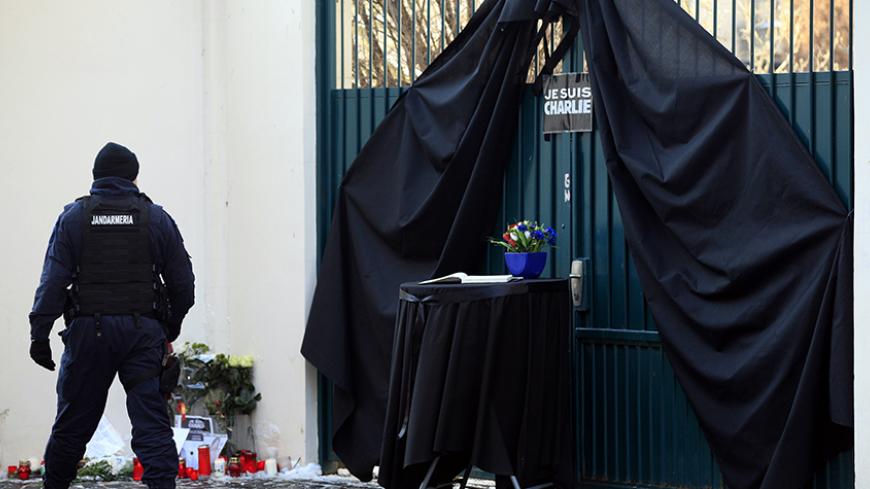 A Romanian gendarme looks on as he guards the French Embassy, with a gate draped in black behind a book of condolences for the victims of the attack at the headquarters of the French weekly newspaper Charlie Hebdo, in Bucharest, Jan. 8, 2015. - REUTERS/Radu Sigheti

The deadly attack at the offices of Charlie Hebdo in Paris was the realization of a long-expected nightmare — a planned homegrown terrorist attack. The two prime suspects, brothers Said and Cherif Kouachi, are French-born Muslims of North African descent. The brothers allegedly went on a killing spree that claimed 12 lives, while a third, 18-year-old Hamyd Mourad, provided the getaway car. Mourad, who has been unemployed and according to reports homeless, has since surrendered, while the brothers, at time of writing, remain at large, having reportedly robbed a service station in the north of France.

From the information available, it seems clear the Paris attack was well-planned and executed by an established terror network, or sleeper cell. The two men were well-armed with Kalashnikovs, carried out a military-style assassination of its prime target, the editor-in-chief of Charlie Hebdo, Stephane Charbonnier, and had devised an exit strategy that has so far succeeded in evading French police. Seven people connected to the suspects have already been arrested, suggesting a wider network could have helped facilitate the attack.

This differs substantially from the Sydney cafe siege in December, which was the action of a single man who, despite his professed radical Islamist leanings, appeared to be mentally unstable. According to eyewitnesses, the French brothers claimed to be members of al-Qaeda in the Arabian Peninsula (AQAP), which has for years maintained a foothold in parts of Yemen. Charbonnier was publicly identified as an assassination target by al-Qaeda in 2013.

This, thus, dispels early suspicions on Twitter that the attack might have been a spontaneous response by supporters of the Islamic State (IS) after Charlie Hebdo published a cartoon yesterday of IS caliph Abu Bakr al-Baghdadi. This would be extremely unlikely, given that al-Qaeda's core in Afghanistan would prefer nothing more than the elimination of its jihadist archenemy Baghdadi. Indeed, there is a strong possibility that the Paris attack might be more about IS than fighting a holy war against the West.

Al-Qaeda and IS have been engaged in a fierce competition for primacy in the jihadist world since al-Qaeda disavowed IS in February 2014. The result has been an ongoing bloody war between IS and al-Qaeda’s affiliate in Syria, Jabhat al-Nusra. Since IS' spectacular offensive in Iraq and Syria last summer, al-Qaeda has been on its back foot playing catch-up as IS steals the world headlines. The main jihadist movement suddenly found itself in second place while IS was drawing the scorn of the West and winning the praise of would-be jihadists.

Jabhat al-Nusra was becoming increasingly concerned that IS’ new fame made it a more attractive destination for new recruits, and thus countered IS’ caliphate with its own declaration of an Islamic emirate in Syria’s northern Idlib province in November. Additionally, there have been reports of splinters in al-Qaeda franchises and defections to IS, most notably in North Africa.

The rise of IS has placed significant pressure on al-Qaeda to respond to demonstrate its relevance and effectiveness in the jihadist world. There is no better way to demonstrate to would-be jihadists worldwide that al-Qaeda is still the don at the table than a terrorist attack in a major Western city. Indeed, the United States has been on alert for such a headline-grabbing attack by al-Qaeda for some time, given its repeated strikes on the al-Qaeda-linked Khorasan group in Syria, which US officials said was planning attacks in the West similar to the Charlie Hebdo raid.

By killing a dozen in Paris, al-Qaeda is throwing down the gauntlet to IS. Of the two, only al-Qaeda can claim to have carried out terrorist attacks in the West, since IS has confined its operations thus far to the Middle East and to contiguous territorial expansion. Despite the jihadist glamour of IS’ caliphate, the ability to carry out major attacks in the West remains a drawing card for al-Qaeda. The frightful question is whether IS will respond to al-Qaeda’s challenge and seek its own headlines with a terror attack in the West.

Until now, there have been few indications that IS was planning to expand its operations beyond the areas where it maintains a physical presence. Unlike al-Qaeda, it has not sought a global franchise network to destabilize the international system, but rather sought to consolidate territory to replicate a nation-state model, and thus conform to the international system. Out of the dozens of small grassroots jihadist factions pledging allegiance to Baghdadi, IS has only endorsed one such pledge outside of Iraq and Syria — Ansar Bayt al-Maqdis in the Sinai Peninsula.

According to Al-Monitor, IS enlisted Ansar Bayt al-Maqdis — renamed Wilayat Sinai — precisely to carry out terror attacks against Western targets in Egypt in retaliation for the US-led airstrikes against the group in Iraq and Syria. This threat, which was reportedly conveyed by Israeli intelligence, prompted the closure of the British and Canadian embassies in Cairo in December. But there appears little information to demonstrate — or at least there has been nothing disclosed by Western intelligence agencies — that IS is planning revenge attacks in the West.

But IS’ calculations may change following the successful terror operation in Paris by its rival in al-Qaeda. Should IS choose to match al-Qaeda’s terror prowess, the West could be facing more regular terror attacks. Such a feat wouldn’t be insurmountable for IS, given the thousands of Western jihadists fighting in its ranks, and the thousands more who discreetly support it in Western cities.

As demonstrated by the Paris attack, the fear now is not whether al-Qaeda and IS can establish sleeper cells in Western cities, but how many and in which cities, and whether the West becomes a new battleground for the growing jihadist feud.